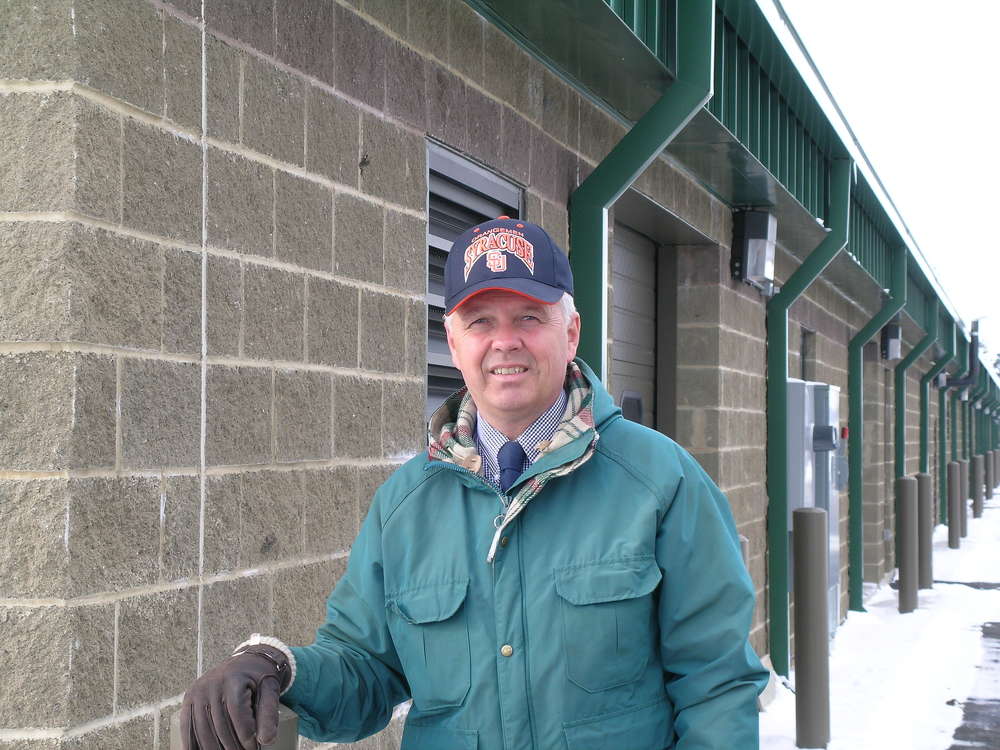 It only makes sense that Richard “Rick” Zilkowski, supervisor of the department of public works (DPW) of the City of Little Falls, would have an affinity for water. Other than his college years, one year as a volunteer in the Peace Corps and military service, he has been near Little Falls water.

Rick’s first position with the City of Little Falls was in water maintenance and as reservoir caretaker. In 1976, he was promoted to watershed manager where he was responsible for the 5,200 acres of the watershed and the entire source water supply.

In 1991, he became assistant engineer working with Jay Ewyank who was the city engineer. When the Ewyank left, Mayor Craig Hebert and the Board of Public Works appointed Rick Supervisor of the Department of Public Works. His current term as supervisor expires in 2011.

As supervisor, Rick’s crowning achievement is the city’s brand new, $7-million slow sand filtration water plant. A unique feature of this plant is that it is the only slow sand water filtration facility in the country that uses ultraviolet light for disinfection.

The Little Falls slow sand filtration process percolates untreated water slowly through a bed of porous sand. Influent water is introduced over the surface of a filter and then is drained from the bottom. This process dramatically reduces the amount of chemicals needed for the processing of palatable water.

“John Cunnan operated with us unlike your typical government agency. He really was there to help us and guided us through a very difficult process in convincing our ‘powers that be’ that this relatively unorthodox plan was right for the City of Little Falls,” said Rick.

“The process is now complete and the new facility has a processing capability of 4.2 million gallons of water per day, of which the city is currently using only 2 million gallons of that capacity. Studies are currently under way, which would allow the City of Little Falls to supply water to neighboring communities,” he said. 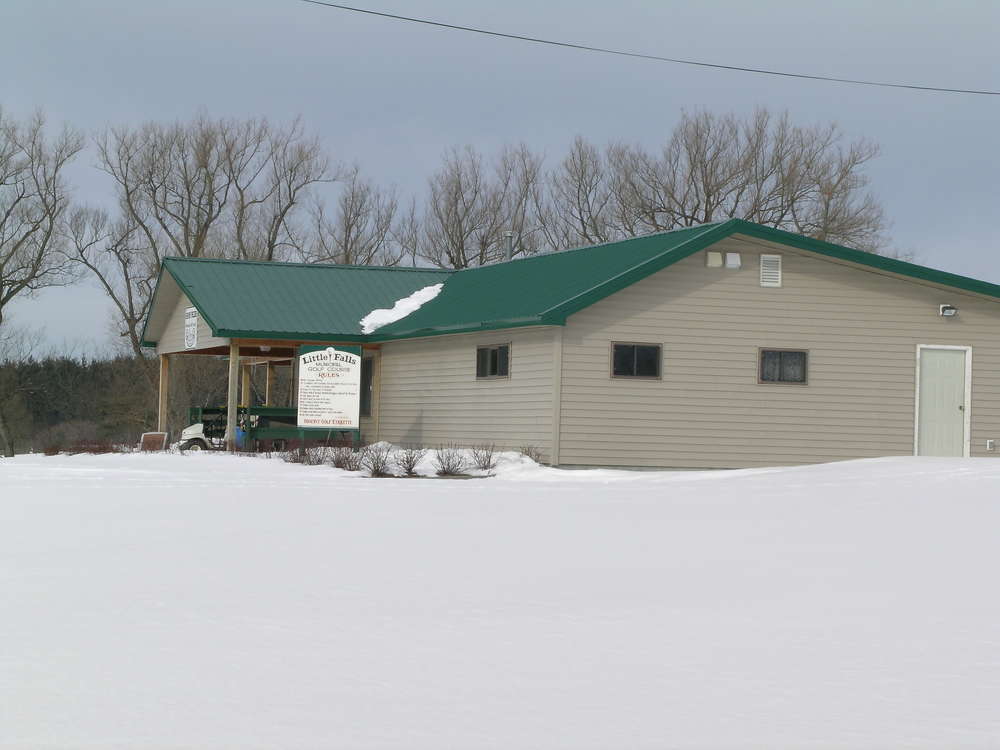 Cunnan had praise for Rick as well. “Richard Zilkowski is a true public servant who truly understands processing water and was open to new ideas and a pleasure to work with.”

Now, through the team effort of Rick and Cunnan, the 5,200 residents of Little Falls can enjoy some of the best tasting water in the state.

“Each year water departments across New York State compete at the New York State Fair for the best tasting drinking water. Over the past decade, municipalities using the slow sand filtration process have won the majority of the contests,” explained Rick.

An additional feature of the new plant is the ease in which he can monitor all operating aspects of the facility using a laptop computer on his desk.

“Operation of this new plant is considerably less labor intensive than the town’s previous facility,” he said.

“These new meters are easily read by the DPW as we drive through an area. The GPS with these meters also show the exact location of every meter and other underground utilities.

“Two-hundred-thousand dollars was bonded for this project, which paid for itself in one year. Before the installation of this new system, it would take a week to read the meters. Now that task is accomplished in one hour,” he said.

Rick is proud of his crew and does not hesitate to say so.

“We are very good at what we do. Bob Peters, our crew chief, is the only DPW employee who has been here longer than I have and David, the assistant crew chief, has been here about 25 years. They run a very efficient department.

“We maintain 24 lane miles of streets — all of which are paved — and three bridges and have done a good job staying abreast with technology. For instance, we recently purchased our own hot patcher, which allows us to respond to the city’s pothole problems more efficiently and more durably than ever before. We have an aggressive re-surfacing program which allows us to keep our city streets in decent condition,” Rick said.

Operating with a budget of $3.6 million and a CHIPS allocation of $89,000, Little Falls DPW employs cost-saving measures by working with the neighboring Town of Manheim. They combine forces for purchasing sand, equipment sharing, and trucking during paving operations, and snow plowing. Rick and his crew are responsible for clearing three routes, which takes approximately six hours to complete.

“In some areas it makes more sense for the town to clear a city street or for the city to clear a town street. The end result is the savings of area taxpayer dollars,” he explained.

The city owns its own bio-waste (or compost facility), which also falls in line with Rick’s conservation background. “We offer monthly pickup of organic waste, that we convert into a mulch product that is available for city projects and also available to city residents.”

In addition to the city’s watershed, which has a 1-billion gal. water capacity, the city also has a water storage tank with a capacity of 4-million-gal. One concept that Rick brought to the City of Little Falls, which has helped revenues, is having the trees harvested periodically from the city watershed.

The maintenance of the Little Falls Municipal Golf Course falls under the DPW’s jurisdiction and the crew was put to the test and came out on top when they completed the construction of a brand new country club for the members of the golf course.

In 2004, the city opened its new ice skating rink located in Eastern Park. Weather permitting, the rink is open daily from December to spring. The 8,400-sq.-ft. rink was made possible by a special grant from the non-profit organization KaBOOM in collaboration with New York State Sen. Hillary Rodham Clinton. Little Falls’ DPW and the Senator’s office worked closely together to make the ice skating rink a reality.

The maintenance of the city cemetery along with the sale of burial lots also comes under the DPW’s umbrella of responsibility.

Above and Beyond the Call of Duty

For the most part, the DPW employees’ jobs might seem to be routine and uneventful. However, occasionally there comes a time when they are called upon to perform a task that is far from routine.

According to a story that appeared in The Evening Times, DPW employees came to the rescue of a skunk that fell into an empty municipal swimming pool, becoming trapped. Their problem was how to remove the skunk without any of the crew getting sprayed. Kevin Harringshaw, of the DPW, scooped up the skunk in a net and set it free. Because the skunk was a little sedate from being in the sun, it scurried away without releasing its odorous trademark.

On another occasion, the DPW employees worked for hours in freezing temperatures and cold water to free a deer that was trapped in a storm drain. Once freed, it too quickly disappeared into the woods.

“Our staff puts in some extremely hard hours and all of them are incredibly dedicated. Together we represent 175 years of combined public service experience. Each day, each and every one of our employees makes me very proud,” said Rick.

“All the equipment is routinely maintained under the supervision of John Sullivan who sees that everything runs smoothly,” said Rick.

Communications and equipment also play a vital part to keep the city running smoothly. To maintain contact with crews in the field or at the various facilities the DPW uses radio equipment and Nextel service for supervisors as well as computers in all offices of the wastewater treatment plant and slow sand water plant. Rick keeps residents informed via the local newspaper.

When talking about his job, Rick said that his best day on the job was his “first day of hire,” and that his favorite part of the job is “reaching goals in the budget.”

“It is a pleasure and privilege to work in a community where I grew up,” he said. “Mayor Ted Wind hired me in 1971 [and] today he continues to be my boss. I am looking forward to continuing my service to the citizens of the City of Little Falls and having more time with my family, especially grandchildren.”

Little Falls Harbor and Other Points of Interest

“The canal system was never designed with recreational boating in mind. It was designed for the transportation of bulk materials via barges. Over the years, the use of these barges through the canal system has diminished to almost nothing. To continue the operation of the Erie Canal system, the Thruway Authority realized communities along the waterway needed to transform the canal to accommodate recreational boating as well as preserving its rich heritage,” Rick said.

“One of the programs put in place by the State of New York to attract boaters was to construct designated harbors on the Erie Canal. The City of Little Falls was selected as one of seven sites for these harbors, which was primarily funded by the state. The Little Harbor offers docking, sewage, water, and electrical hookups and hot showers. This has become a major tourist attraction,” he said.

Little Falls also is well known for is its 40-ft. high lock landmark, which is located near the city limits. It is the highest lift lock in North America. Nearby is Moss Island, which is noted throughout the region for its unique geological formations and tremendous variety of unique vegetation.

Another prominent attraction is Canal Place, which is the cultural and social focal point of the City of Little Falls’ well-attended Garlic Festival. The Canal Place also offers several fine restaurants and the Mohawk Valley Center for the Arts, which is accented by several sculptures and perennial flowerbeds.

And, lastly, thousands of people descend on Sterziner Park each year for the City’s Canal Days Celebration. Begun in 1988, the Canal Celebration recognizes the varied and ethnic groups who played a critical role in the development of the city, and the importance of the canal to its economic development. Events include musical entertainment, a parade, picnic, bike race, youth fishing derby, boat rides, historic home tours and more.

When the first white traders came up the Mohawk River, they had to carry their canoes around the rapids, which they called “Little Falls.” The name remained for more than 200 years, except for two years, 1850 to 1852, when the name was changed to “Rockton,” because the citizens thought that little meant a little town, and they dreamed of a metropolis.

In 1722, a group of German Palatines came up the Mohawk to look over the land. An Indian Deed dated July 9, 1722 granted 92 persons lots in Herkimer County along the Mohawk River beginning at the Little Falls.

The earliest industries included a sawmill, gristmills and a foundry at the mouth of Furnace Creek The village was incorporated in 1811. A cheese exchange was established in 1853 to 1875, making Little Falls the “cheese market to the nation.”

In 1895, the community received its charter as the City of Little Falls.

The Mohawk River descends more than 40 ft. as it passes through the narrow gorge, while proceeding less than 3 mi. New York Lock 17 on the contemporary Erie Canal was constructed to solve this engineering challenge, replacing three locks on the 1825 Erie Canal. Until very recently, this great lock was the highest lift lock in the world.

At the turn of the century, Little Falls was the site of much industrial growth due to its immense source of available energy. Today, a hydro-electro plant located just west of Lock 17 is tapping this source of power.