Retired Highway Superintendent Wayne Russell and the Town of Augusta 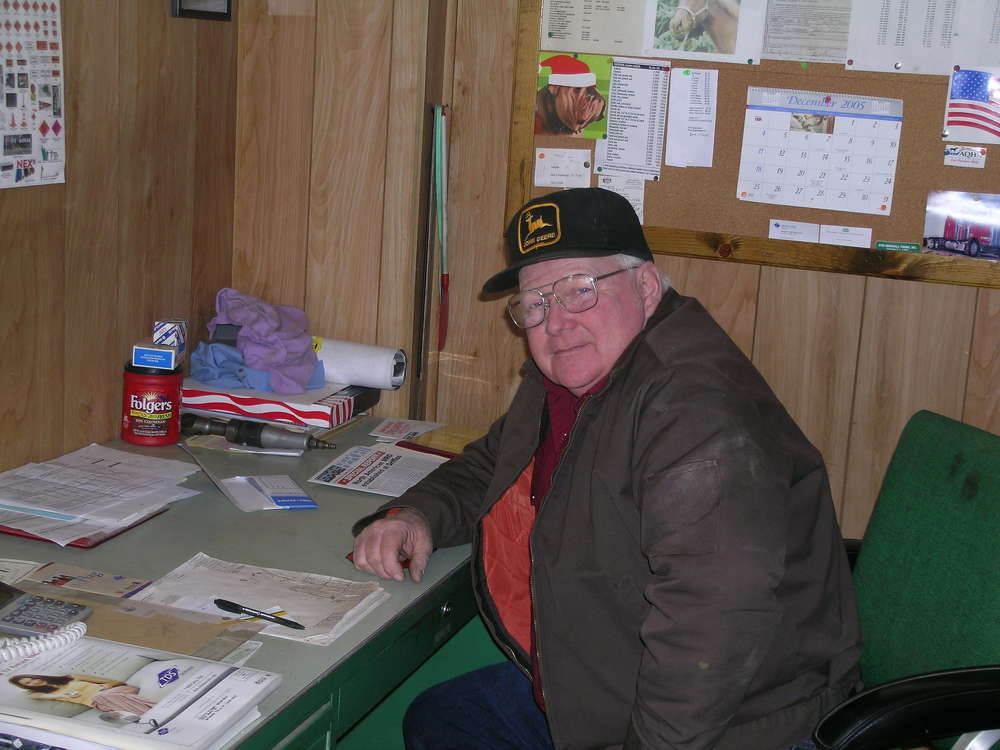 When Wayne Russell retired as highway superintendent of the Town of Augusta in Oneida County, he traded the horsepower of machinery for the power of Quarter horses he raises on his 150-acre farm in Vernon Center.

His interest in Quarter horses began when his daughters were young and took up riding. As their interest in horse barrel racing grew, it was natural that Wayne and his family would raise the horses to ride in competitions. Today, Wayne has nine horses, some of which will be competing in local events.

While raising horses was not a new venture for Wayne, becoming highway superintendent in 2000 was.

Before his election to the position, Wayne worked for UPS. But he was always interested in politics. He had been approached several times to run for the superintendent’s position but didn’t accept the challenge until six years ago.

“We were raising four boys and four girls and considered taking a job that was an elected position was too risky. However in 1999, with the kids pretty much raised, I agreed to run for the position and was elected,” Wayne said.

During his time in office, one year in particular stood out as being unusually challenging.

“It takes four hours to complete three plowing routes but the ice storm in 2003 was very severe. Power outages were massive and countywide. Eventually the fire department was called to help the highway department to clear the extensive number of trees that came down. It took three days of tree cutting before power was restored to the town. For this particular effort the town received $16,000 in relief money from FEMA,” Wayne said. 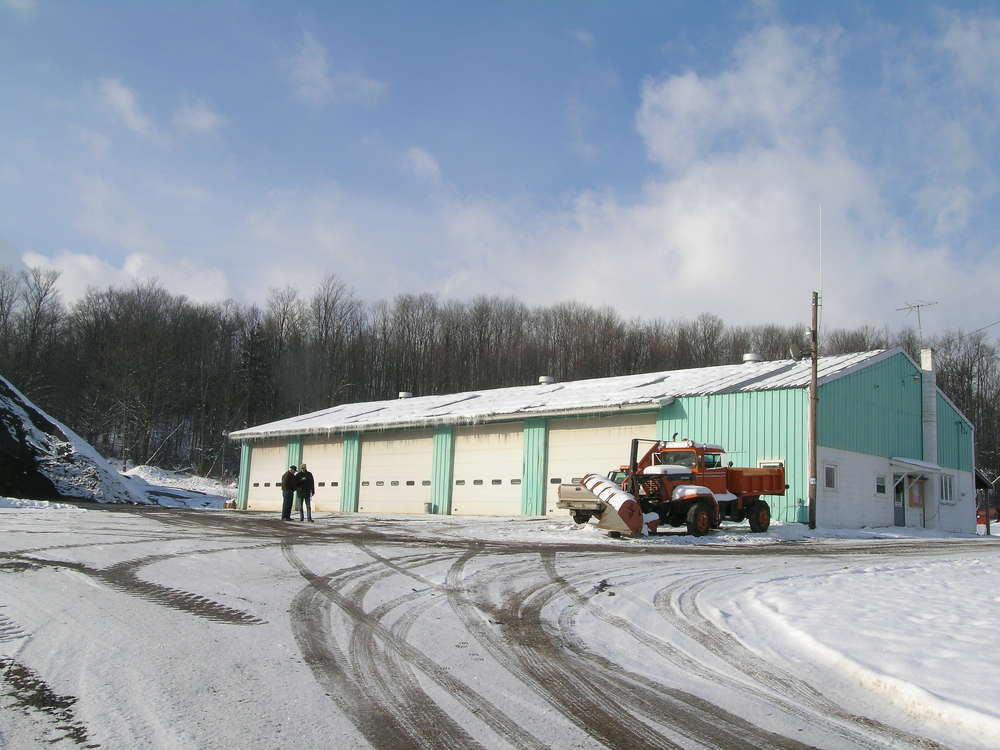 Two pieces of equipment that Wayne found invaluable during this storm were a 1966 Oshkosh truck with a V-plow, which was originally purchased from Syracuse Truck Sales, and a 1969 Oshkosh dump with V-plow.

“These trucks can’t be beat. They’re kind of crude and they don’t offer any luxury items, but when it comes to pushing snow, nothing else works like them. The Town of Augusta gets approximately 120 inches of snowfall each year, but the real issue is the amount of wind that it gets from the nearby lakes. We can get a snowstorm this week and still be pushing the blowing snow from the roads each day for the next several weeks,” he explained.

“We use only cold paving and we try to do a few miles each year. We do not do asphalt paving. In my opinion, there is not enough base in our roads to use hot asphalt,” Wayne explained.

“There is only one seasonal road in the township. There is an old cemetery along the road and two farmers own the rest. We do a pretty good job keeping the road maintained because we believe that someday there will be residences established on the road. It will just make our job harder if we don’t keep up the maintenance now.”

Because the town does not have a large equipment budget, equipment maintenance is crucial.

“We have a preventative maintenance program, which includes routine service and safety checks for every machine in the fleet. All maintenance records are kept and the cost recorded. We keep this information to help build a case if I needed to go to the board to have a piece of equipment replaced,” Wayne said.

“However, the board is pretty good about replacing the equipment. Most of the board members have a farming background and they understand the importance of having good working and reliable equipment.

“When it’s time to replace the machine, generally no bond has to be posted because the town pays in cash. The town will generally first look at the state contract to see if a machine that meets the specs of what they are looking for is available on the state contract. If it is not, then the equipment is put out on bid,” he explained.

“The Village of Oriskany Falls has the only other highway department within the Town of Augusta and the two departments often work on a cooperative basis on projects of mutual interest,” he said.

In addition to maintaining roads, the highway department is responsible for two bridges and six cemeteries, which crews mow twice a year.

Elsewhere, during the summer, the crew mows continuously. All brush is cut back from the roadway and each road embankment is mowed three times a year.

Currently, the highway department facilities, which were built in 1963, include a storage barn, a five-bay garage, a break room and an office. There is no salt storage capacity, but a salt shed is planned for construction in the next few years. The town is hoping to get state and federal dollars to defray the cost. However, a 60-by-68-ft. cold storage facility is in the planning stages for next year.

Wayne communicated with his staff by radio but when someone in the community had a problem, he made a personal visit.

“Whenever we would get a call, I tried to personally go out and see the resident. By far, our biggest complaint, as in the case in most townships, was damaged mailboxes.

“We would get the occasional call in the spring about minor flooding where runoff is not good. Although over the past few years, we have removed a lot of trees and replaced a lot of culverts, which has eliminated a lot of runoff problems,” Wayne said.

“We really tried to take care of the needs of the residents. If a resident needed a culvert installed or replaced, we made it a point to respond quickly and take care of their needs.”

“A superintendent puts in long hours and in the winter you never know from day to day when you will be called out. This is difficult on the crew, too. I feel pretty good that in general the residents have been pretty happy with the job that we’ve done over the past six years,” Wayne said.

And, although Wayne has retired, he still lends a hand as wingman for Larry Winn, the new superintendent of the Town of Augusta.

Geographically, the Town of Augusta lies among the rolling hills and fertile hollows of the Mohawk Valley. Politically, it consists of three communities within Oneida County: Augusta Center, Knoxboro and Oriskany Falls.

The earliest white settlers in the Town of Augusta migrated “up country” from the New England states following the Mohawk Valley to the west. They came on foot or on horseback, in canoes or bateaus, or by oxcarts following Indian trails. Whatever their means of transportation, the journey was long and difficult. However, some settlers had the advantage of an early familiarity with the area through trade with the Indians or service in the military campaigns of the Revolutionary War.

As early as Aug. 17, 1793, there were 23 white persons living in the area. The first settler was a man by the name of Gunn who in 1793 built a log house on the ridge (Skyline Drive) north of today’s Oriskany Falls. Benjamin Warren built the second house on what is now Sayer-Huth Road. And John Alden began clearing the south lot on the road that passed north-south through the Centre (Augusta Center).

In 1794, a considerable number of pioneers came to this area. This same year, Peter Smith leased from the Oneida Indians approximately 60,000 acres of land, which he called New Petersburgh. The southeast corner of Smith’s tract was the southeast corner of this township. He divided his tract into four allotments, the first of which lay entirely in the future Town of Augusta.

A great number of early pioneers came from the states of Connecticut and Massachusetts and among them were: Colonel Cassety who built a log house and a saw mill on the bank of the Oriskany Creek near the falls in 1794-95 and a grist mill in 1795; Benjamin and Isaac Allen settled on land on today’s Skyline Drive; and Amos Parker lived on what is now the Solsville-Augusta Road.

In 1796, the only path in the local area that could be considered a road was one that ran from Clinton to Madison, passing through what would become the Town of Augusta. Another route ran from Clinton to Deansville (Deansboro) and then on to Oriskany Falls and south.

In 1797, five families came from Washington, CT, and resided on the street running south from the Centre and called it Washington Street.

The organization of the Town of Augusta was finally accomplished in 1798, simultaneously with the organization of Oneida County. When the township was about to be erected, Colonel Cassety’s militia superior, Brigadier General Augustus Van Horn, promised to give Cassety a new military hat if he arranged to have the township named after him, hence the name Augusta.

In 1834 there was stagecoach service that helped the population of Augusta to reach 3,347 people in 1835. By 1848 the stage traveled over a plank road. In 1850, another plank road was opened from Rome, through Vernon and Augusta, to Madison crossing the entire township. When the planks wore out, the roads were eventually converted to gravel roads. In 1906, the road from Oriskany Falls to Vernon Center was the second state road constructed by New York State. Today, this is Route 26.

The Village of Oriskany Falls was first called Cassety Hollow after Col. Thomas Cassety, first supervisor of the Town of Augusta in 1798. However, with the Oriskany Creek running through it, and the falls of the creek almost at its center, it was inevitable that it would become Oriskany Falls, when it was incorporated in 1888.

In 1887 the Chenango Canal, which ran through the center of Oriskany Falls, was opened connecting the Erie Canal at Utica with the Susquehanna River at Binghamton. Coal was the main cargo transported north from Pennsylvania, and limestone was shipped from quarries on the outskirts of Oriskany Falls.

Several decades later, the Utica, Clinton and Binghamton Railroad served the same purpose as the canal. However, with the event of highways and trucking, the railroad lost its importance.

The focal point of the community is Douglass Park with its gazebo, playground and fountain where concerts and other activities take place.

Since 1995, the village has been the seat of the Town of Augusta. The town offices and village offices are maintained in Oriskany Falls. The population of Augusta today numbers 2,070. Many of the residents of Augusta work outside the town.