Highway Superintendent Bob Haywood and the Town of Black Brook 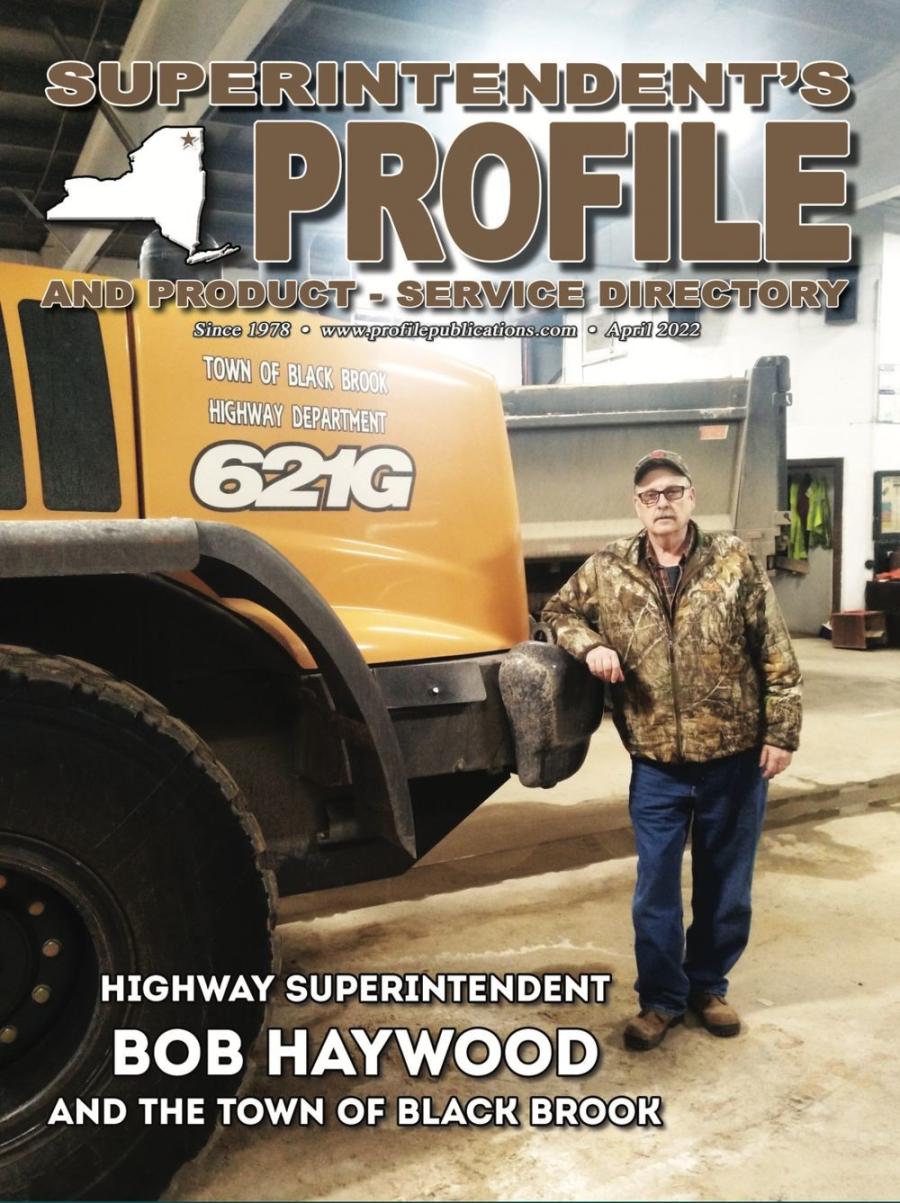 Having served seven terms as Black Brook's duly elected highway supervisor, the veteran superintendent is looking forward to retirement. But first, he and the town board must ensure that someone is "all set to succeed" him.

It's a big ask, but he's optimistic that the town will find a replacement.

He also hopes his successor will be appointed by the end of the year so he can "get used to the job" before the 2023 election, when Bob's four-year term expires and he leaves office.

When his term ends, Bob will have more time to spend with his family. With two children, Heather and Bobby; two stepchildren, Ben and Nicole; and nine grandchildren, he has a lot of family to spend his retirement with. Susan, his wife, looks forward to his retirement as she pointed out that he has "never taken a vacation."

That is about to change.

However, if no one steps up to assume the superintendent role, Bob said, "I will stick around until election day [November 2023] if they don't find anyone."

Since his first year as superintendent in 2002, Bob has overseen the town's roads and more, but his primary focus has been on acquiring and maintaining equipment without breaking the budget.

He and his crew of five full-time and one part-time staff members do the oil changes and greasing on the town's equipment. They "try to repair everything we can in-house," he said. Bob may have picked up that habit while working as an MEO in the 1980s for the highway department before becoming superintendent, or while working as a loader operator at the Coldspring granite quarry before that.

He might have learned it during his three years as a truck driver in the Army, half of which he was stationed in Germany. Interested in exploring other parts of the United States upon his return, the New York native ended up being reassigned to Fort Drum, just three hours from where he grew up.

Bob has a boom tractor on order. It will be used for trimming brush, giving the crew the ability to reach over guardrails, which will save time.

"I have a five-man crew and a lot of territory to cover," he said.

Black Brook is part of the second-biggest township in the county, but the rural area features a considerable amount of state land and property owned by a timber company. It has a sparse population of about 1,500. "It's spread out," Bob said.

The never-ending need to upgrade and replace equipment has sent Bob to Albany to look at used equipment available through the Federal Surplus Program, in which eligible state and local government agencies and nonprofit organizations can obtain property the federal government no longer needs.

"One of my greatest accomplishments was getting involved with the program," he said. "We have upgraded quite a few pieces of equipment and saved the town a substantial amount of money."

For example, he acquired a grader he describes as "like brand new," a pickup, a Ford dump truck and an International four-door, two-ton truck he uses to tow the chipper. He paid $1,200 for the International, which has a mere 4,000 miles on it.

"It's a fabulous program," he said.

Buying equipment through this program has saved the town a lot of money. He once saw two trackless sidewalk machines listed for sale as mowers.

He put a mower on one of these multi-purpose machines. Unfortunately, one crew member rolled one of them and it burned up. The silver lining, however, was the insurance check for fair market value in the amount of $18,000.

"I always looked forward to going to Fort Drum once a month to see what they had," Bob said.

Buyers request the property they're interested in. The program's board sells it to the buyer they consider most in need of it, based on recent awards.

One of the perks of driving to Fort Drum to look at equipment is meeting "some great people along the way," as Bob put it. In fact, he considers the opportunity to meet people the best part of his job.

Another trip he enjoys is to Ithaca to attend the Cornell Local Roads Program put on by Cornell University every June.

Sort of a school or seminar for highway superintendents, the three-day event offers classes, speakers and an opportunity to network with other superintendents from around the state. "I always learn more by talking to others," he said.

One thing he hears from other superintendents is the conflicts they have with their town boards. "I'm lucky," Bob said. "I have always had a good town board to work with."

"We used to buy water from a neighboring town," Bob said. But Black Brook will soon have its own supply, due to well drilled last winter. Bob's crew has cleared space for a new water tower and has been digging lines for pipes, which they will install. This cooperative venture will save the town a lot of money on the installation.

They sometimes do paving projects with other nearby towns, Bob said. In addition, they have an agreement with the Clinton County highway department to provide maintenance for 38 miles of county highway. Contract terms stipulate reimbursement to the town of Black Brook for plowing and sanding.

Working 6 a.m. to 4 p.m. in the summer and 5 a.m. to 1 p.m. in the winter, the crew also takes care of one abandoned cemetery. "Just trying to maintain most everything we do — paving, cutting brush, cutting shoulders — on an annual basis [is an accomplishment]," Bob said.

In an attempt to make the work environment safer for his crew, Bob said they "took the screens off all our trucks and put all material through a grizzly so the guys don't have to climb on the trucks in the middle of nowhere to knock off big chunks." This innovative approach keeps the drivers in their trucks.

It's a young crew, Bob said, and every one of them is an MEO. The veteran of the crew, Dick Fletcher, officially retired, but works part-time in the winter, helping with snow removal. Howard Drake, foreman, has been with the department 16 years, and Mike Plumadore and Josh Haywood (nephew of the superintendent) have been there 10 years, Bob said. The other two — Noah Hemenway and Cody Lawrence — haven't been with the department a long time.

They work out of the main garage. Built in 1970, it measures 60 by 120. There's an additional satellite garage on the other end of town, as well as a Quonset hut for cold storage and a salt shed that can hold 150 tons.

Radios in all the trucks allow them to communicate with each other in a region where cellular service is spotty. The town maintains a Facebook page to let the community know about emergency road closures, projects and other news.

Before he leaves office — whenever that may be — Bob hopes to update an old bucket truck because he'd like to put the hometown hero banners in front of the families' homes to honor them.

Other plans include the typical paving projects and replacement of some sidewalks. He said Black Brook also is considering creating a dog park.

But on his mind are leisure activities, like riding his side-by-side with his wife. The pair can take the utility vehicle and "go for miles" right from their house, which is located in a secluded, quiet spot. The trail system meandering through some of the 380 acres Bob leases from a friend.

Black Brook, first settled sometime around 1825, has plenty of outdoor activities to offer — something that appeals to Bob.

The Clinton County town was named for the stream that flows southward through the center of town. The stream itself is a tributary of the west fork of the AuSable River, which runs 94 miles from the Adirondack Mountains to Lake Champlain.

Early industry in the area included farming, mining and smelting iron, but Bob believes the area is best known for trout fishing in the AuSable River, with the town serving as the self-titled "Wild Trout Fly Fishing Destination." However, there are numerous other bodies of water providing fishing and other outdoor activity opportunities.

In addition to the Adirondack Coast — the second-longest freshwater beach in the United States — there are several large lakes in town, such as:

To get a better view of some of the lakes, ponds and peaks in the Adirondacks, such as Catamount and Whiteface Mountain, many people make use of the hiking trail along Silver Lake Mountain's open rock ledges. A drive up the Veteran's Memorial Highway also provides scenic views of the mountain valley, but to reach the summit requires some footwork.

Bob grew up in nearby AuSable Forks, but has lived "a quiet, simple life" in Black Brook for 60 years. He has dreams of a little farm and of traveling, although he said the nine grandkids will keep him and his wife in the area after he retires.

He's OK with that. Asked to run for the office by the previous superintendent who resigned to become a private contractor, Bob said, "I like a challenge." His wife thinks he often goes "above and beyond" the call of duty.

Sticking around until his replacement is found may qualify as both a challenge and going above and beyond, but, as he often tells his crew, "It could be worse. I try really hard to make the best of each day."

In the end, he recognizes that the people of Black Brook appreciate the job he does, so he's willing to hang on a little longer, if necessary. P