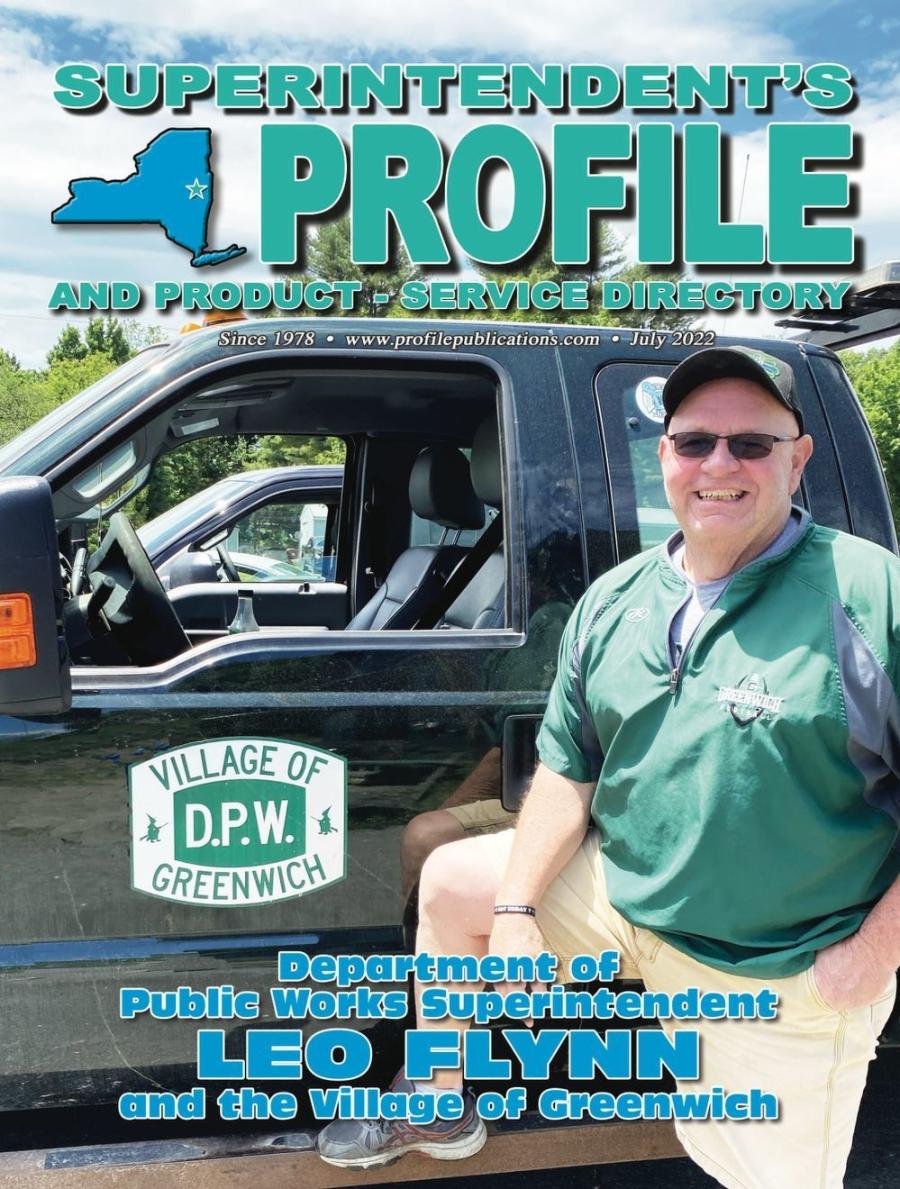 (Photo courtesy of Village of Greenwich)

Leo Flynn, department of public works superintendent of the village of Greenwich, is celebrating 40 years on the job.

Appointed to the position by the village board in 1982, Leo had worked as a motor equipment operator for the department under the previous superintendent. While that experience proved valuable, he modestly credits part of the decision to hire him to the fact that he had a water operator license.

Although he has an agreement with the board to retire this summer, because he's the only DPW member licensed to operate the wastewater system, he's agreed to stay on a while as a part-time consultant. Full-time employee Brian Buell has a water operator license, but isn't licensed for sewer, Leo said.

"It's extremely tough to get," he said of the wastewater operator license and joked that "the guys retire; I don't," as he pointed out that he's been through "two or three crews" during his four-decade-long tenure as superintendent.

The village of Greenwich, in Washington County, is a small community of approximately 2,000 residents. It's where Leo grew up and where he raised his family. His love of the place explains his interest in serving the community.

The village of Greenwich is located along the 59.4-mi.-long Batten Kill, a river flowing from Vermont into New York as a tributary of the Hudson River known for trout fishing. Settled by European-Americans after the Revolutionary War, the area attracted residents because of the availability of water power.

Water remains central to village life. Leo recalled one of his best days on the job as the one on which the village won an award for the best-tasting water in Washington County.

To ensure ongoing water quality, Leo and the department began working on a water improvement project in May by digging out the mains in preparation for larger ones and cleaning them. The project involves replacement of many of the old water mains with larger capacity pipes. The village obtained a $3 million grant and a zero-interest loan for the rest of the $8 million project, but progress slowed due to a ductile iron pipe shortage.

"The contractors can't bid without supplies or knowing the price of materials," he said.

Another water project in the planning stage is installation of an ultraviolet light system for the wastewater treatment plant by 2024 to replace chlorination of the water before it goes into the river.

"A lot of homes and businesses were dumping into the river," he said.

It's a small treatment plant that doesn't include the entire village, although the water system covers the whole village.

Water also was central to the worst day on the job for Leo, a member of the Rural Water Association and the Wastewater Association. On a cold January day three years ago, a water main that runs under a creek from the water plant had a break. "The break cut off the entire village," he recalled.

They couldn't get into the creek to repair the break because temperatures didn't get above 20 degrees for days. Instead, they ran water through a firehose for two weeks, with help from multiple fire companies and the state, which brought in bottled water. Finally, they were able to cut out on both sides on the line. Then, they used two hydrants to shut it off and put up a temporary plate along the side of the bridge.

Leo's department does more than just fix water and sewer leaks — although that is part of their job. They also mow the parks, plow the roads and sidewalks, manage garbage and recycling pickup, oversee the wastewater treatment plant, pave roads and do special projects.

The sewer system was installed in 1985 and is part of the village. The sewer plant and wastewater treatment plant are two of the department's facilities, along with a six-bay garage, a four-bay garage with an office inside and a salt storage shed with capacity for 300 tons of salt. Most of the buildings were built in the 1950s, Leo estimated.

Although its buildings are aging, the department has smart meters. Meter reading used to take three days, Leo said.

"Now, we get the entire village in one hour."

Next, he'd like to upgrade and standardize the fire hydrants.

"We want to have all the same kind of hydrants."

The village sometimes works with the town of Greenwich on sweeping streets, plowing and equipment exchange. They also assist the town of Schuylerville with garbage and recycling services as needed.

In their "spare" time, they do one-off projects that are a little more fun, like building a splash pad and the "little Fenway" wiffle ballpark for the community's youth.

"The ex-mayor was a Red Sox fan," Leo said, "so we replicated Fenway — complete with the Green Monster and all the ads."

Another community service they did was to create a system for making mulch, which they then offer free to residents.

There's another project on the drawing board: the possible redevelopment of an old paper mill site that's been vacant for 15-20 years. Leo said there are plans to redevelop the site as a hotel and brewery, and some much-needed housing.

The old paper mill may one day undergo a renovation, but some local historical sites will be preserved as they were, such as an important station of the Underground Railroad located in the village. The Underground Railroad was a network of secret routes and safe houses used by enslaved African Americans in the early to mid-19th century to escape to free northern states and Canada.

The village has another claim to fame because Chester A. Arthur, 21st president of the United States from 1881 to 1885, attended prep school in Greenwich when his father was a pastor at Bottskill Baptist Church. Arthur served as vice president under President James Garfield, and succeeded him in office two months after Garfield was shot and killed by an assassin in September 1881. Arthur, a former lawyer who was quartermaster of the New York Militia during the Civil War, served only one term as president.

Village history dates back to the American Revolution. Just 20 minutes away is the Saratoga battlefield, now part of Saratoga National Historic Park and site of the first significant American victory in 1777, when American forces defeated the British and forced the enemy to surrender. This success so impressed France that the European country recognized the United States' independence and joined the war as an ally.

Thirty minutes from the village is a Saratoga of another kind: the famous racetrack in the city of Saratoga Springs. The third oldest racetrack in the United States, it opened in 1863 with a thoroughbred race just a month after the Battle of Gettysburg.

The village has seen its share of changes over the years. Originally named Whipple City after Job Whipple, owner of a successful cotton mill in 1804, the village changed its name to Greenwich in 1867.

Evolution of a Superintendent

Like the village he grew up in, Leo underwent a few changes over the years. Before coming to the department of public works, he worked for the family funeral home and furniture business at the tender age of 14.

"I never knew if I would carry a refrigerator or a body," he said with a chuckle that belied the truth of his statement.

The family businesses taught him skills he applies to his current position, such as good communication, organization and budgeting — although he confessed that budget planning is his least favorite aspect of the job. Nevertheless, he has a budget of $980,000 ($80,000 of it CHIPS) to work with.

In addition to managing the crew and planning a budget, Leo oversees the department's equipment, which includes:

"Forty years flew by," Leo said, adding, "It's a job I enjoy: I get to work outside when the weather's good. I like the area three out of four seasons."

Unfortunately for the superintendent, that season he doesn't like is one of his busiest. The department is responsible for plowing 10 lane mi., all paved. Divided into three routes, each takes 2.5 hours to complete.

In recent years, the area hasn't received a lot of snow, but residents have had to deal with ice. Last year was an exception. "Before Christmas last year, we had a large snowstorm," Leo said. He got up at 4 a.m. to discover that the village set a new snow record: 42 inches. "Nothing could move. We used the small plows to get to the big trucks."

The village has a website for communication with the public. Leo makes sure the department is active in community activities, such as parades and events. On a personal level, when he's not working with his crew to solve problems, he stays involved with the community officially as a town justice. "I ran in January 2000," he said. "I work a couple days a week."

He also connects with the community by officiating at high school and semi-pro football games and has been coaching high school football for 32 years.

"Leo has been a very dedicated employee, friend and boss to many over 40-plus years on the job," said Mary Beth, his wife, who works as a surgical nurse at Saratoga Hospital. "Leo not only cares about our community, he cares about each employee and loves his family beyond measure."

That family includes adult children Jake, Lindsey, Christopher and Jason and seven grandchildren — all of whom went with him and Mary Beth to Disney World in February. It's not the only traveling he does. "We go to Maine every year."

He's comfortable taking trips because, as he said, "The place runs itself. The guys know what to do."

The laid-back attitude that he acquired from years on the job shouldn't be mistaken for indifference.

"I hope I left things better than they were when I came," he said.

Once the department finally cuts him loose, Leo intends to keep busy with his other civic duty as town justice. "I'll still coach and referee," he said, "and I have a pool and lots of apple and cherry trees to take care of." P