Superintendent of Highways Barbara Czworka and the Town of Bethany 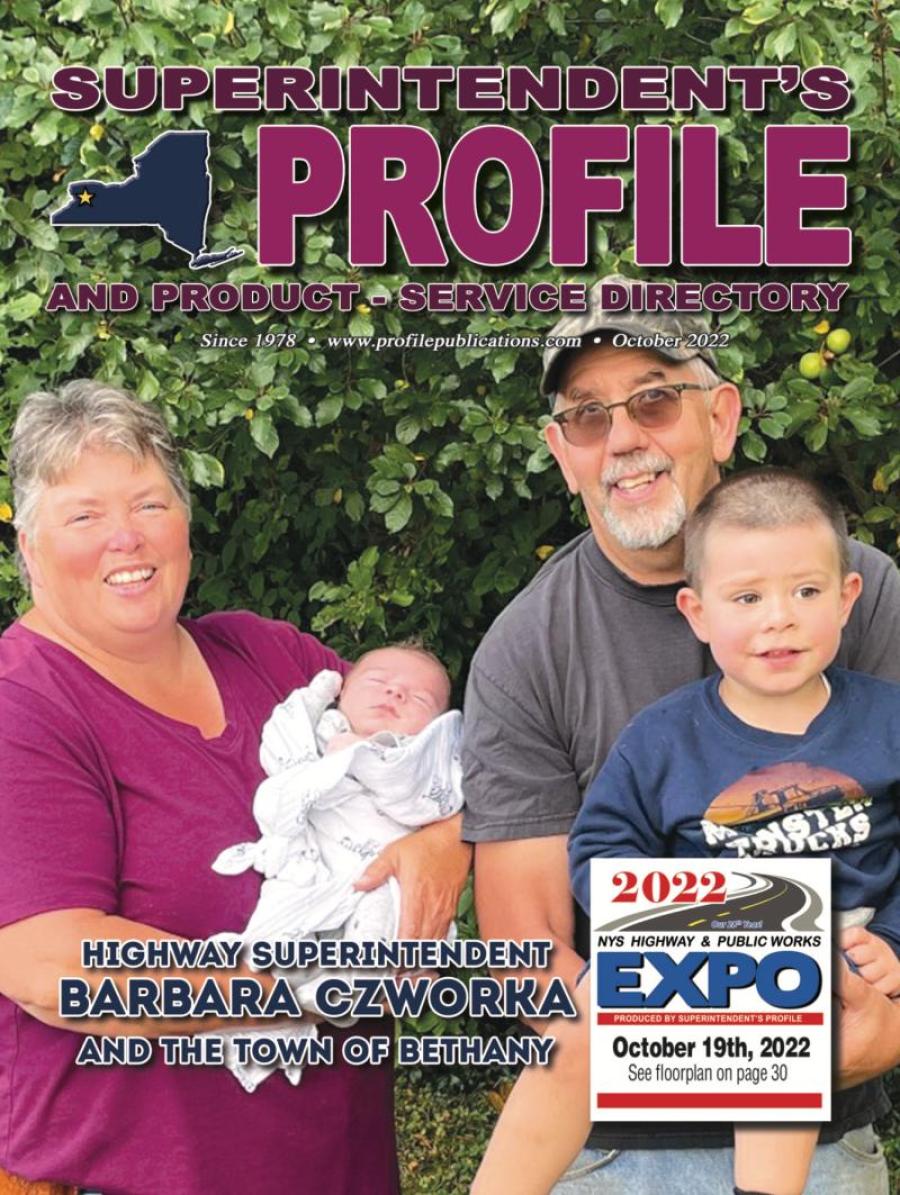 Barbara Czworka is unique. As highway superintendent of the town of Bethany, she's a member of a select group of individuals. Barbara is one of 13 female supers out of the more than 1,328 in New York State.

She's spent all but two years of her life in the town.

"I'm child number four out of eight. My cousins lived next door. We spent lots of time together enjoying the outdoors. One of our neighbors had a cabin in the woods, so we camped there. We also picked strawberries and helped my uncle put hay away."

Barbara graduated from Alexander Central in 1979. "I did general studies with cosmetology as my major. I also have six college credits for learning how to be a manager through Ponderosa."

That's when she headed off to college to train to be a manager.

"My employee management skills and labor laws come from there," she said. "I know things have changed. I tried to keep up on them, but it doesn't always work. My history with the town is pretty much my background as to this because I started as a contractor in 1994. I did that until the dump recycling closed in 2020. Then, I went from being the compact person to picking up Mondays with the highway department. As time went on, I was asked to be a full-time laborer, so I made the move from Ponderosa to here."

In what is mostly known as a man's world, why did Barbara want to be a superintendent?

"It was something I wanted to do for eight years but didn't want to run against the bosses. I just had to pick my time of running. I didn't want to step on toes and hurt feelings because people were working their way through retirement. I know what that's like. When things got rough and highway superintendents were coming and going, I decided to throw my hat into the ring. Plus, my stepdad was highway superintendent for the same town."

"I started full-time with the highway in 2004," she said. "I worked from the ground up to boss, starting as hauling recycling one day a week and then two days. I moved to setting up signs to flagging then on to the roller and learning how to operate a loader. When I went full-time, I helped with tiling and mowing on roadsides. Then, I was changing culvert pipes [under road]; a wing person for several years and shoveled sidewalks. I also ran a one-ton plow on short dirt roads to parking lots. Each of the previous highway superintendents taught me a little more about paperwork."

Barbara's been married to her husband, Tom, a cook at Leroy Village Green, for 40 years. They have two boys. TJ (Thomas Joseph), 34, works at Markin Tubing in Wyoming. Tyler Walter, 30, is a prison guard in Groveland and married to Amanda. Barbara and Tom also have a two-year old grandson, Luke, and another recently born grandson, Logan.

Tom was quick to add that "being the highway superintendent has been a wonderful opportunity for Barbara. It's something she's always wanted and I'm happy she got the position."

Barbara sits on the town's planning board and is their secretary. She's also the secretary/treasurer of the Genesee County Highway Association and a church schoolteacher at Mary Immaculate.

"I'm thankful for all the help other highway superintendents and the Genesee County highway department have given me in getting things done and helping me see the different ways things can be accomplished. Also, a big thank you to my crew."

In what little spare time she has, Barbara enjoys being with her family and friends, gardening and raising meat chickens on the side.

"I raise about 350 a year and then sell them. Six of us eight children went together and bought a neighbor's farm when he was ready to give it up. We also have beef cattle. My uncle next door to us always had a couple of cows or pigs or something. So, we always did something with animals."

When asked what she'd like to do when she finally retires, Barbara thought for a minute before answering.

"I still see a lot of projects I'd like to work on. So don't rush me. I'm enjoying the job and I derive great satisfaction from it. My plan is to stay right here. I want to make my next term as good as this one has been."

The town of Bethany highway department's facility was built in the 1970s. It consists of six bays and the main shop, which is 120 by 50 ft.

"When they first built this, my office was in the town hall," Barbara said.

In her role as highway superintendent, Barbara is responsible for maintaining the town's 61.04 lane miles of road, of which two are gravel and 24 are paved. That translates into three plowing routes that take anywhere from 2.5 to 3 hours to clear.

Barbara is the first to admit that gender doesn't matter when it comes to being highway superintendent.

"Training and background do matter," she said. "I have an experienced crew. I try and get my time on the equipment so that I'm comfortable enough with it to know what the challenges are for my men when they're out there operating. Am I ever going to be the ‘Ace' backhoe operator that my guys are? I don't think so, but that's OK."

The town of Bethany's highway department runs on a total operating budget of $421,670 that includes employee salaries and benefits and an annual CHIPS allocation of $166.036.

To help carry out its duties, the department uses a bevy of equipment that consists of:

While all highway superintendent prides themselves in having an up-to-date fleet, for Barbara, that's easier said than done.

"We always save our money. A lot of it is what we save from year to year out of the highway budget, which isn't a lot. We also try to bond."

"We need a mower with an arm on it. We had one and then they sold it and didn't replace it. So, it makes it tough to do some of our work."

Who's responsible for maintenance?

"We do basic maintenance like fixing brakes or something like that and do our own oil changes. If we can do the bigger stuff, we do. If we can't, we can't."

When it comes to technology, "It hasn't really affected our equipment. Technically, our stuff is too old."

Since buying new vehicles is rarely an option, Barbara depends on nearby municipalities to share their equipment.

"We use shared services a lot. Mainly we share with all of Genesee County and Covington and Middlebury in Wyoming County."

Now, time for the lightning round.

When asked what part of her job is the most rewarding, Barbara had trouble limiting it to one.

About the Town of Bethany

The town of Bethany was established in 1813. The township of Bethany is located in the southeast corner of Genesee County, bordering on Wyoming County. Many of the early pioneers settled in the township before the War of 1812. Bethany was set off from the town of Batavia on June 8, 1812. The first town meeting was held on April 8, 1813. The meeting consisted of members of several small communities in the area, which included Bethany Center, East Bethany, West Bethany, Little Canada, Linden and Putnam Settlement.

Bethany Center was the first settlement in the town. Town meetings were held there. Several buildings were built in that area including the Methodist Church, a school, stores and taverns. The Methodist Church was only in existence for 12 years, after which it was incorporated into the Bethany Academy. The Academy served many students over the years. The students were boarded with local families. When the Academy closed, the building was converted into the Townhouse. It served as a meeting place for several organizations including the Grange. It now serves as the town hall and town court. The volunteer fire department, town highway department, Baptist Church and Maple Lawn Cemetery are also located in Bethany Center today.

East Bethany is located in the northeastern section of the town on Route 63. It was the second most important settlement in the town. At the time it boasted a store, a blacksmith's shop, church and an inn. It is now the location of the post office, general store, the Presbyterian Church, the East Bethany Cemetery and Immaculate Conception Church.

Little Canada, which is located northeast of East Bethany on Black Creek on Route 63, was formerly known as Bennett's Mill. The name change came about as a result of an argument between two women. Apparently, one of the Bennett women, who lived on the south side of the creek had a disagreement with a woman who lived on the north side. During the argument Mrs. Bennett told the other woman to go back to Canada (the north side) and stay there. Hence, the name change. Little Canada also boasted a Methodist Church, which has congregation of 17 members. There also was a cooper's shop, a large structure, which was used as a dance hall and of course, the mill.

The area just north of Route 20 bordering Alexander and Bethany is known as West Bethany. This area, at one time, was a thriving community. It supported mills, a store, a blacksmith shop and a post office. The Little Tonawanda and the Tonawanda come together here and provided power for grinding feed and flour. There was also a mill, which also produced cloth. Now there are farms and some residences in the area. The West Bethany Baptist Church and the West Bethany Cemetery are still active there.

Linden, originally called Gad-Pouch is located in the southwest corner of the town of Bethany on the Little Tonawanda Creek. Linden achieved considerable notoriety in 1924, when three people were found murdered. No one was ever arrested for these crimes. There has been much speculation over the years and a book was written on the murders.

Putnam Settlement and Francis Road are on the northwest corner of the town. The area, named for the families who settled there, had a blacksmith shop. The Putnam Cemetery is one of the oldest in the town of Bethany.

The County Home, also known as the Poorhouse, was built in 1826. Located on the corners of Linden and Bethany Roads, the brick building was opened in 1827 to house paupers and infirm. In 1828, a new stone building was erected to house the mentally ill and prisoners. The County Home was completely self-sufficient, growing crops and animals on the 200-acre farm. Many people in the area were employed there. The Home housed 73 patients at the cost of $0.15 per patient per day in 1890. In 1962, 110 to 115 patients were housed at the cost of $4.37 per day. The state furnished evergreen trees in the 1920s, which were planted throughout the 200-acre farm. Now, there is a beautiful 200-acre stand of hardwoods that comprise the County Park. In 1974, the County Home had outgrown the facilities and needed to be near services provided in the city. At that time everything was moved to Batavia. The building was vacant for several years. It was eventually sold and converted into a craft and consignment mall. Today, it is now promoted for paranormal activity as Rolling Hills Asylum.

Located on the corner of Bethany Center and Raymond Roads, the Genesee County Park is a popular spot for families and groups throughout the year. Part of the acreage from the County Home now comprises the County Park. The evergreens and hardwoods, which were planted in the 1920s, now make a perfect area for bird watching, hiking and picnicking. The new Interpretive Center opened recently, along with new park offices.  P