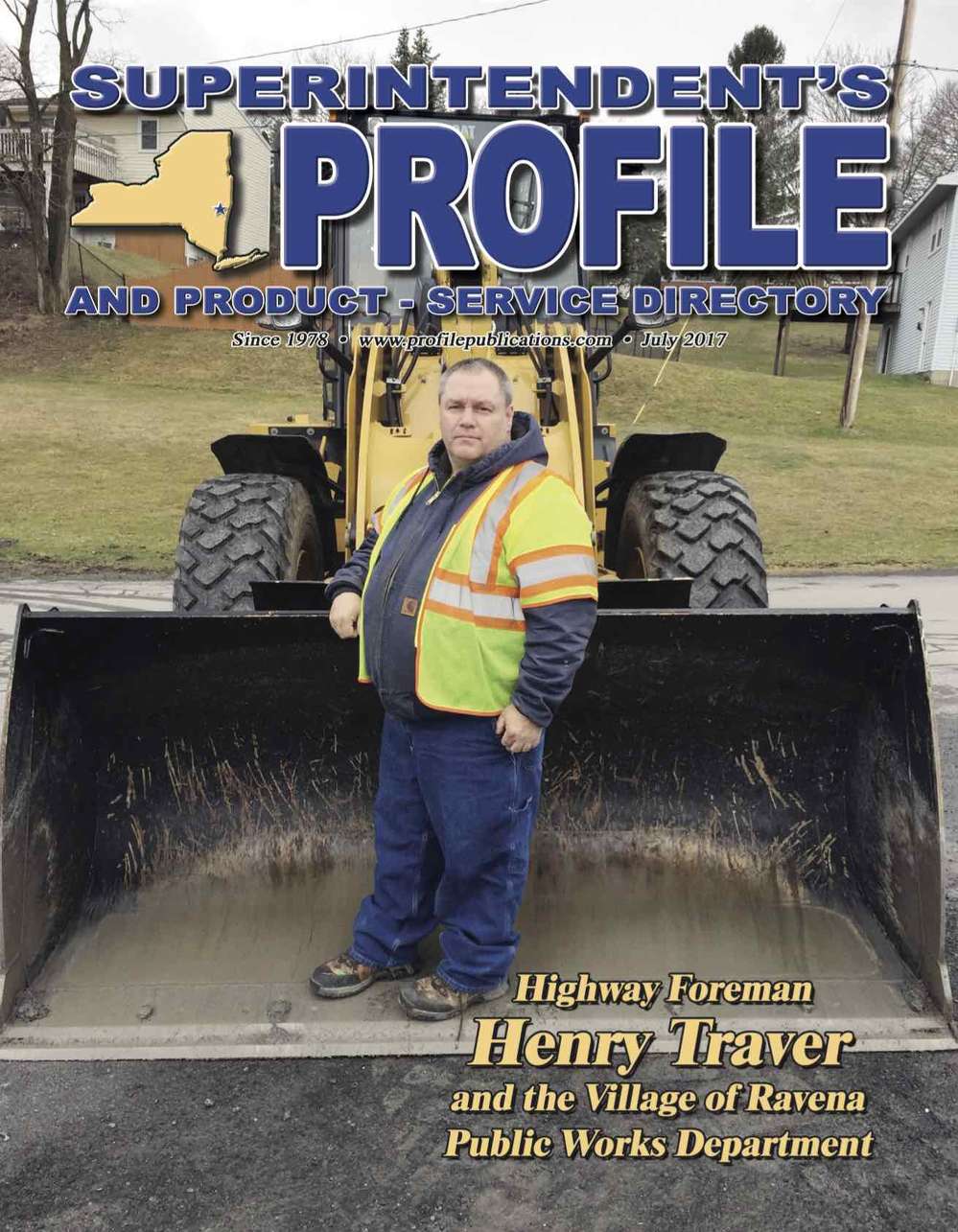 For Henry Traver it's all about service. Since he graduated from high school, he has dedicated himself and his life to serving others.

“I've always had a life-long dream of doing public service. I joined the National Guard in 1984. I spent six years with them as a mortar man in Albany, N.Y., then, I switched my Military Occupational Service (MOS) code and became a medic. I trained at Fort Meade in Maryland for two weeks. I was stationed with an armored infantry, which was a tank outfit. I was lucky enough that I didn't have to serve overseas.”

If that wasn't enough, in 1986, Henry joined the Ravena Fire Department. He was an active member for 25 years, retiring in 2011.

“I was president of the organization for two years and was named Firefighter of the Year one year. I was an EMT with the rescue squad. I did that for 18 years and was recognized as EMS Member of the Year. I also served as a police, fire and rescue dispatcher for the town of Coeymans for 22 years.”

So, what brought him to the highway department?

“A friend of mine was working here. We did everything together — fire department, rescue squad, military. There was an opening for a temporary spot as a laborer. The following year, the mayor hired me as a full-time utility worker.”

It was Henry's on-the-job training that prepared him for the top post. 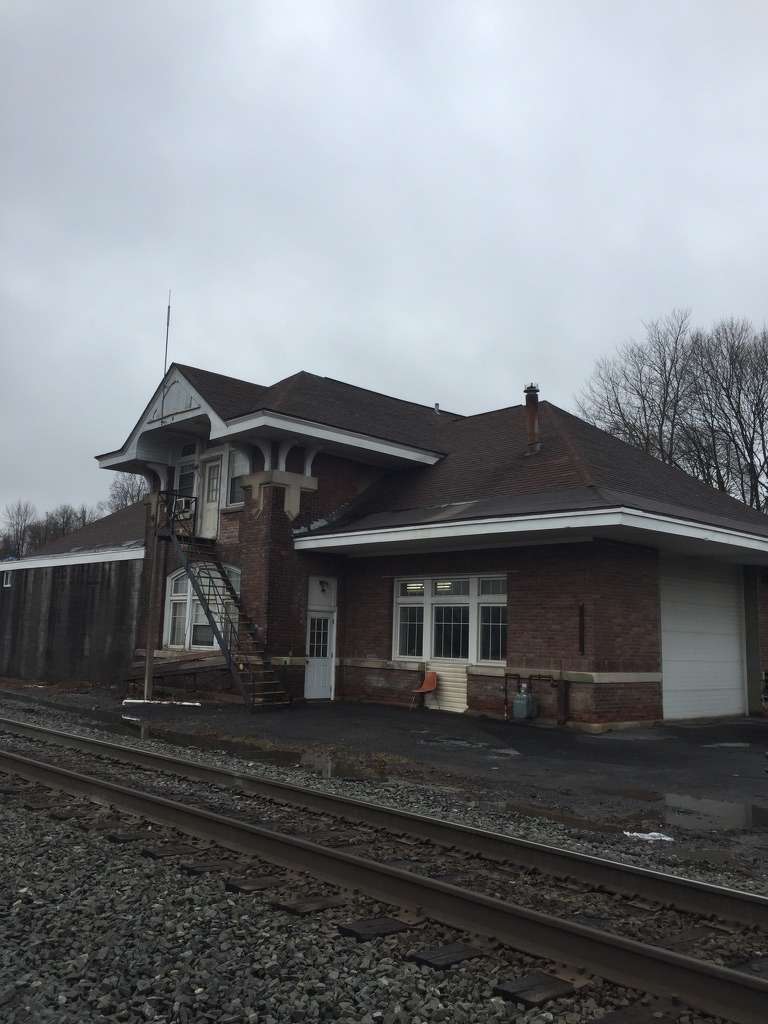 This old rail station was transformed into the village garage — one of four DPW buildings.

“It's an appointed position. I learned all the stuff over the years and, through seniority, the position of foreman got passed on to the next in line.”

Henry and his wife, Nicole, have been married for 23 years. He is the proud father of four daughters: Gabby, 26; Audrey, 24; Kristen, 21; and Margaret, 20. He and his wife are expecting their first grandchild this summer … another girl.

Involved in several community groups, Henry was a board member for Head Start and Pop Warner. “My daughters were all cheerleaders!”

“My wife manages two hotels in Yorktown, Va., while I travel back and forth. We both want to go south and she had an opportunity to work in one of the most historic areas. She's been there for just over a year. My dream is taking up residence in Virginia when I retire. I like history and would love to see the top 20 historic sites in every state.”

Henry still has a few years before taking to the open road. 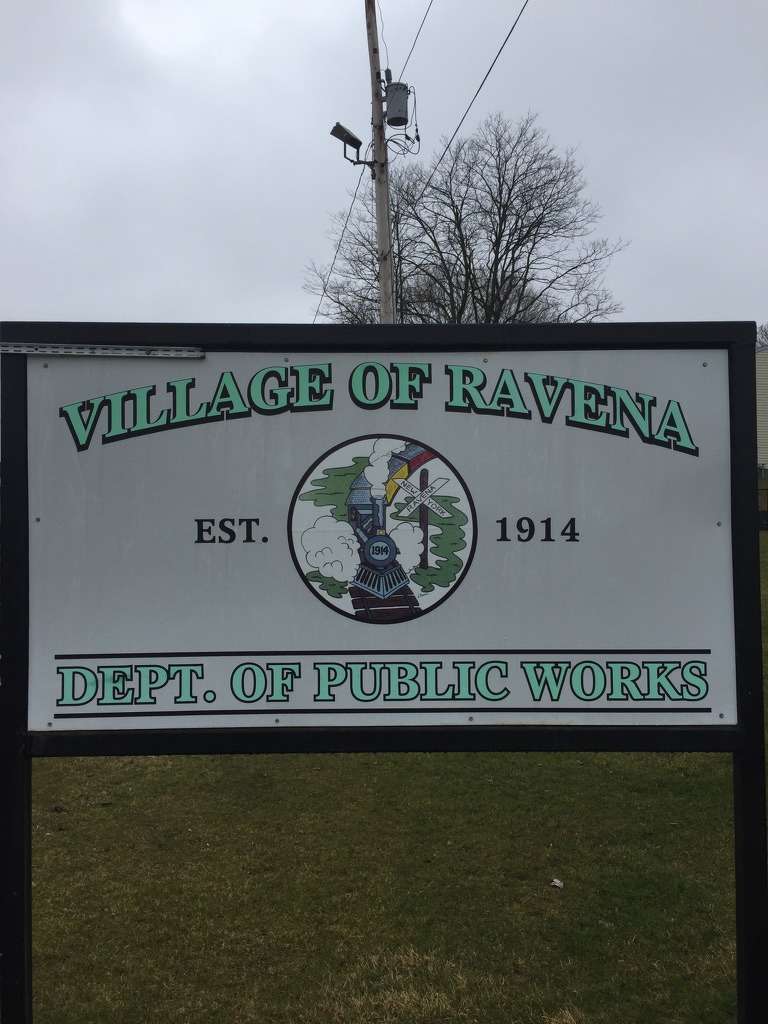 The village of Ravena department of public works’ sign greets visitors as they enter the complex.

“The age for state retirement is 55. I have a little over five years left, but I may go in 2019. I'll be in good shape between the dispatch and here.”

All About the Job

The village of Ravena's highway department is spread out among several buildings. In one, you will find Henry's office and a break room. Then there are four maintenance buildings where the loaders, backhoes, dump trucks and pick-up trucks are stored.

As the highway department's “top dog,” Henry is responsible for maintaining the town's 22 lane miles of road, all of which are paved. That translates into three plowing routes that take about two and a half hours to complete.

“This winter, we had three major storms hit. The last one dumped 22 inches. That's a lot of snow. Within 13 hours after the last snowflake fell, all our streets and parking lots were completely bare.”

“I have a talented crew. I give them a lot of credit. One of my guys built our own elevator shaft in the municipality building, so we could get to the second floor. It took about a month and a half. We saved thousands of dollars by doing it ourselves.”

Under Henry's guidance, the village of Ravena's highway department runs on a total operating budget of $791,000 that includes salaries, employee benefits and an annual CHIPS allocation of $66,000.

Every year, Henry puts money in his reserve account for purchasing new equipment.

“I try to get at least one piece a year. We mainly buy new off state contract, although we have bought a few used pieces. Prior to that, the most recent thing we bought was a 2016 Cat loader. It's more computerized than some of the other pieces we have. The next update I'd like to see would be a dump truck. I'm also looking to get a mini-excavator for the village.”

While Henry agrees that today's vehicles are better made, he's not so sure they're easier to use.

“You have to get used to it. With the new technology, there aren't any moving parts, which is nice. It's still changing but not drastically, at least not with the equipment we use.”

This time of year, Henry and his crew are gearing up for summer. That's when they do their big projects, like giving the roads a facelift.

“Paving is nice, but we have to maintain what we have, so I like chip sealing or oil and stone. It's a huge savings. If I blacktopped Mountain Road, for example, it would cost between $80,000 and $90,000. Chip sealing would run us about $14,000. I can get four or five chip seals for the cost of blacktopping one road.

“The best roads for chip sealing are the ones that don't have to re-mill down to get them lower. Milling down the road is when you take down a few inches of the road you have already. Then, you're re-blacktopping back and then blacktopping it again and adding the cost of milling. The frequency depends on the height of the road. All your roads have drainage, so if you get too high, you have giant holes where there are manholes or catch basins. With oil and stone, you're only going up a half or quarter inch each time. When you blacktop, you're going up two or three inches.”

All the while, safety is uppermost in Henry's mind.

“It's my job to make sure the village has safe roads and drinking water. We're maintaining the roads as best we can, so there aren't potholes that could damage residents' vehicles. We also maintain the safest conditions possible whenever there's a water main break to avoid contamination that would affect the public. We average seven breaks a year. Temperature change is a trigger. As things shift underground in the spring and fall is usually when breaks occur because our soil is clay and stone, causing the ground to move.”

“That's my goal. We plan to do it in small steps with water, sewer and storm sewer. The pipe size would have to be increased for all three, especially sewer. Buying larger pipes is expensive, but if we do it in stages, it won't be as bad.

“When I first became foreman, I thought of doing a three- or five-year plan, but once I got in here, things changed. I try and go with the flow all while keeping the infrastructure in mind. I've presented it to the board and their reaction was positive. Now we're working on getting grants and loans. The problem is the village is fiscally sound and grants are typically given to hardship municipalities. It's a double edge sword. You're trying to be fiscal responsible and you're penalized for it. There's no way to get around that. You just have to keep trying … and trying … and trying. I'd like to see that in place before I leave, at least the start of it. Once it's started, the village won't back off. They'll keep it going.”

Like most highway supers, when it's all said and done, Henry wants to be remembered as “knowing that I did a good enough job to keep the village running for many more years.”

About the Village of Ravena

Ravena is located one mile west of the Hudson River within the township of Coeymans in the county of Albany. The village, which was incorporated Sept. 9, 1914, was originally named Coeymans Junction. In the mid-1880s, construction began on the New York, West Shore and Buffalo Railroads and at “Ravena,” the line split easterly toward Albany and westward toward Rotterdam and on to Buffalo. Thus, the title of Coeymans Junction was bestowed on the area to differentiate from Coeymans Landing, the hamlet, located directly on the Hudson River, which had become an active shipping access to New York City.

The arrival of the railroad brought expansion to this area as families of the employees required housing and other facilities. The railroad yards and switching terminal was a major factor in this area until the 1920s when the Selkirk Yards, located five miles north, were opened. By 1894, the residents wanted to have an independent identity as often the terms “Junction” or “Landing” were omitted from their addresses. So, in that year a post office bearing the name Ravena was established. However, it was another 20 years before the actual village was incorporated as a municipal corporation and it has operated under this type of government since

Ravena is the only so named in the United States and there is no proven story as to how the name came to be. Some credit a local resident with adopting the name RAVEN, a brand of flour, and adding an “a.” Others feel that the location beneath the cliffs of limestone on the western boundary caused the area to be referred to as the “ravine.” Main Street also is known as New York State Route 143 and formerly was part of the Westerlo Plank Road, a “toll road,” connecting Westerlo in western Albany County to the Hudson River at the Landing. Ravena is easily accessible from the New York State Thruway 1-87 as it is located 5 miles south of Exit 22 (Selkirk) and 5 miles north of Exit 21-B (Coxsackie). The city of Albany is just 15 miles north and can be reached by either US Route 9W or Rt. 144.

Several businesses and churches and the Ravena-Coeymans-Selkirk School District serve the community. Volunteers to the Ravena Hose Company established in 1898 provide fire protection and the Ravena Rescue Squad provides ambulance services. Municipal water and sewer facilities and a municipal park and pool complex are available within the village. Three thousand five hundred residents form this community.