Highway Superintendent John Ruchel Jr. and the Town of Kinderhook 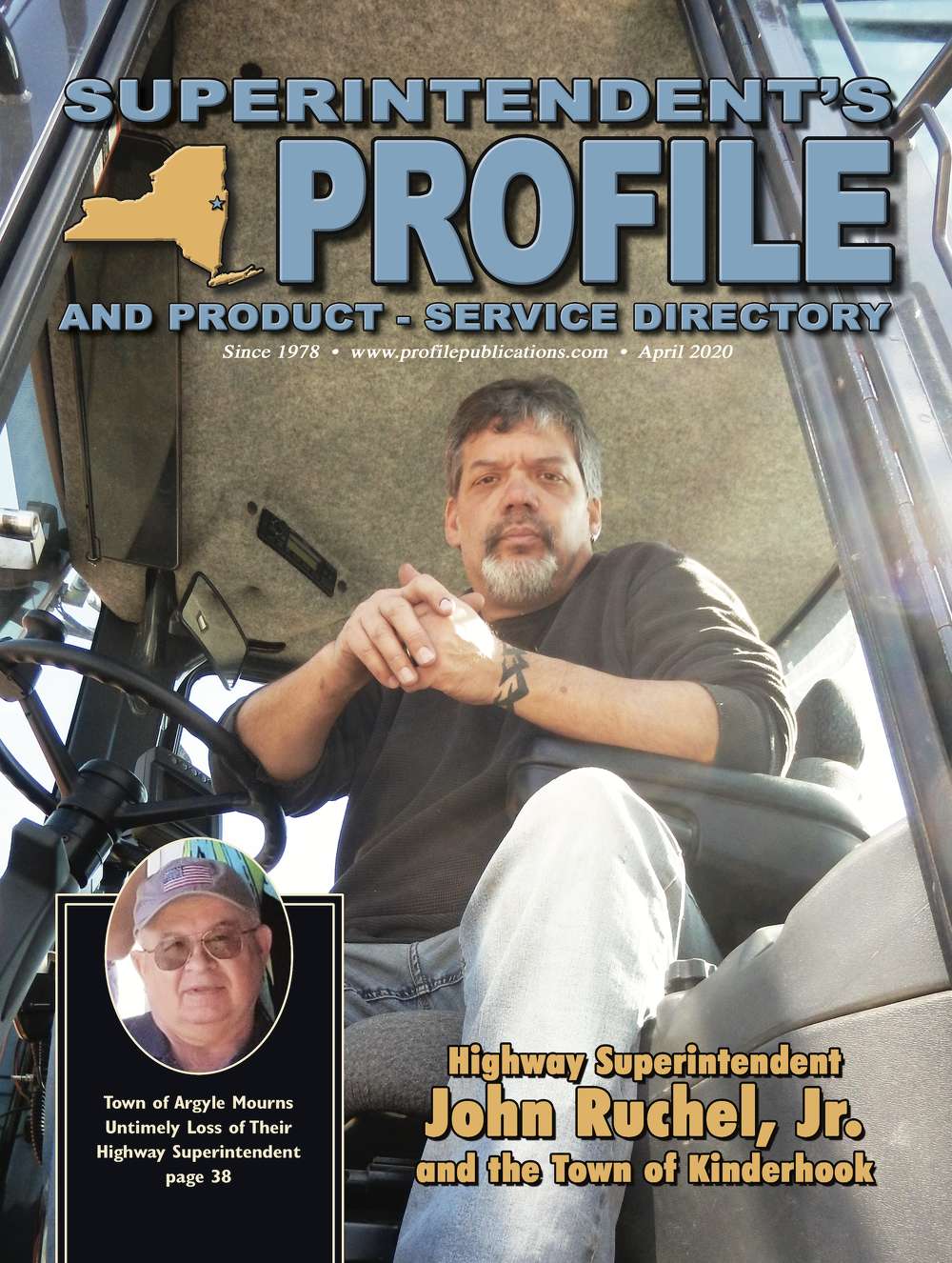 Town of Kinderhook Highway Superintendent John Ruchel Jr. was first elected in 2005 and will be up for election again in 2021 when his current four-year term expires. The Niverville native is hoping to win that election and continue serving his hometown.

During his first campaign more than 16 years ago, he knocked on doors — often in the company of a female candidate so residents felt better about opening their doors to a young man wearing an earring. These days, because he is cross-endorsed by both parties and has run unopposed since his first term, he's no longer knocking on doors, but he is staying true to that first campaign promise to get back to everyone, whether their feedback is good or bad.

If he had to campaign, John could run on his achievements during his tenure in office. Those include paving 30 miles of road and assisting in the design of a new 12,800-sq.-ft. garage built in 2008 that includes an office and breakroom.

Prior to John's election, the town used an old, cold storage building. “It was horrible,” he recalled. “Holes in the furnace stacks spewed fumes into the garage. The drains didn't work. Ceiling tiles fell down because they were waterlogged. They had to keep tarps on the overhead doors. The lunchroom wall was moving because the foundation made of cement block was eroding. It was bad for morale — and it was dangerous.”

Despite the obvious need for a new building, John ran into resistance on building a new structure. He battled for three years until an engineer's report supported the cause.

“It was a long process,” he said. But he fought the challenge head-on, determined to make it a better workplace. 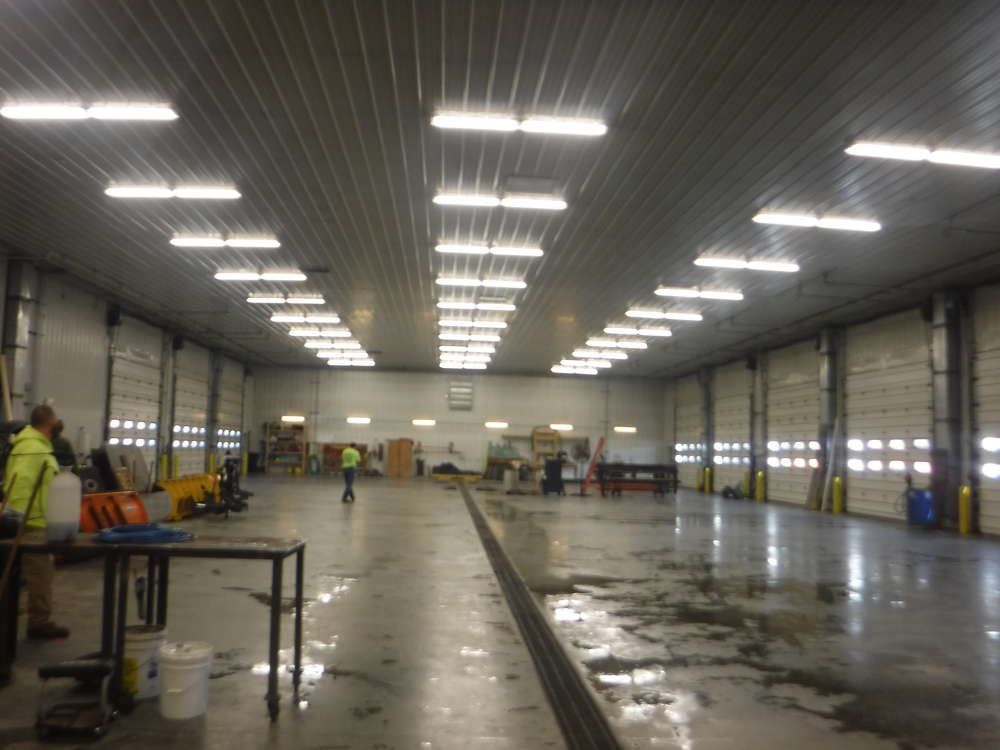 Now the crew enjoys a heated office, clean floors, better use of space and a safe area to store equipment.

Now the crew enjoys a heated office, clean floors, better use of space and a safe area to store equipment.

“I was lucky enough to be able to have something to do with getting the new garage,” he said humbly, adding that his best day on the job was the day they moved into the new building.

Additional facilities for the town include a 1,600-sq.-ft. pole barn and a salt shed with salt storage capability of 600 tons.

With an operating budget of $1.6 million — $117,000 of which comes from their annual CHIPS allocation — the Kinderhook highway department oversees 130 lane miles, of which 116 are in the town and 14 in a village contract. Thanks to the paving project John spearheaded, only six of those miles are still gravel, but John said half of the roads in town need repaving. While heavy snows are rare, the town maintains 10 snow removal routes that take about three-and-a-half hours to complete.

It's his least favorite part of the job.

“Winter is stressful,” he said.

He worries about the crew's safety on the plow routes, taxpayer safety on the road and about keeping the equipment running until the roads are cleared. “There are no parts stores open at 2 a.m.”

Snowfall amounts in Kinderhook vary. They got two feet of snow at the beginning of this season, but only a couple inches here and there since. But, John cautioned, with warmer temperatures comes ice, which can be even riskier to maneuver. However, due to the cost and to changing weather conditions that can see temperatures too low for treatment to be effective, he doesn't pre-treat roads.

In better weather, his department has approximately 30 acres of parks to mow and maintain, and beginning around Memorial Day, crews also start mowing the roadside. Because softball, little league and soccer are popular, his crews also keep the grounds manicured and the park roads in good condition. Park maintenance alone takes 20 hours or more a week. “We lose three guys all summer to mowing.”

Located in the northern part of Columbia County, Kinderhook gets its name from an encounter between Henry Hudson, an original Dutch settler who also gave his name to the nearby river, and local Native Americans and their many children. “Kinder” means children in Dutch and “Hoeck” means hook, or bend — as in a river. Thus, the town located at “the bend in the river where the children are” became Kinderhook.

Since the days of Dutch settlement in the early 17th century, Kinderhook has grown to a current population of just under 9,000 residents. Under English control, it was first chartered as a town in 1686, much of the land acquired through purchase from the Mahican people.

Used as hunting, fishing and farmland by its Native inhabitants, Kinderhook was redefined by European settlement that introduced businesses. The town became known as a marketplace for local farmers and later, during the 18th and 19th centuries, as a magnet for attorneys, politicians and other educated professions.

Van Buren launched two unsuccessful presidential campaigns from the 36-room Federal/Gothic Revival mansion he purchased during his presidency. He lived on the estate until his death in 1862.

The intellectual congregation in the Hudson River Valley is further illustrated by nearby attractions, such as Robert Livingston's 1740 mansion in Clermont. Burned by the British Army in 1777 during the Revolutionary War, the home was rebuilt by Margaret Beekman Livingston, whose son Robert became New York's first chancellor, a member of the Committee of Five who drafted the Declaration of Independence, and the country's first Secretary for Foreign Affairs. He also served as the lead negotiator of the Louisiana Purchase and co-inventor of the first commercially viable steamboat.

Other notable historic homes in the area include the 1892 Victorian home of author Edna St. Vincent Millay, Steepletop; Olana, home of Hudson River School painter Frederic Church; and the home of Thomas Cole, founder of the Hudson River School art movement in the mid-19th century that showcased romantic portrayals of the American wilderness.

Life was less scholarly for the resident who became superintendent. At the age of 17, he joined the fire department. He later applied to the Albany Fire Department, but at that time, firemen were required to live in the area they served.

Instead, he went to work as a laborer for the town of Kinderhook, where he soon worked his way up to machine equipment operator for the highway department. He credited that experience for his success in his role at the top.

“Starting from the bottom and making my way up gives me an understanding of what my crew has to do on a daily basis,” he said. “I've been there myself, so it helps me have a good relationship with all my crew members.”

John said he ran for superintendent because after a week of working for the town, he knew he wanted to make it a career.

“After a few years, I realized I wanted to be highway superintendent — to better the department.” When the timing was right, he ran for the office.

Safety is No. 1. “My goal is to send everyone home to their wives each day, all fingers and toes still attached,” he laughed.

In all seriousness, though, safety and the best interests of his employees are uppermost in his mind at all times. The concerned superintendent said his worst day on the job was when one of the guys wasn't feeling well. Thanks to his background at the fire department, he knew something serious was wrong, so he sent the man to Urgent Care. The employee survived, but it was his last day of work.

Ever concerned for his staff, John hopes to improve budgeting for personnel.

“Costs have gone up considerably and it has gotten extremely hard to find good, qualified help at the pay we offer. I have worked here for 30 years, and the worker's pay has just gotten over $20 per hour.”

It's not the only area he'd like to see the budget increased. He is working with the town to “somehow increase the budget.” Meanwhile, he's attempting to attain his long-term goal of getting all the roads paved and up to standards while staying within the budget he's been given. If necessary, the incumbent superintendent could campaign on his record of improvement and sensible management.

“More paving” is his fervent goal, but not his only one. The town's equipment inventory includes two backhoes, three loaders, five single-axle dump trucks, a tandem truck, six F550 dump trucks, three F350 pickups, a utility truck, a grader, a water truck, a mini-excavator, three trailers and a roadside mower. On John's wish list are a skid steer, a bucket truck and a new grader.

“Our grader is 37 years old, so it has seen better days,” he said. “A skid steer would have many attachments we could use on a daily basis.”

A member of the Highway Superintendents Association, John enjoys his job of public service. “I like helping people.” He accomplishes that in creative ways.

Recognizing that not everyone benefits from the parks, he deduced an alternative way to improve life in Kinderhook. The brush program he advocates has become a “big thing,” he said. For six to seven weeks in the spring and again in the fall, his crew picks up leaves and tree limbs from residences.

“We spend $20,000 a year to rent property to take the brush to and they grind it,” he said. The highway department also maintains a place at the garage where residents can bring brush all year for disposal.

“His job is a tough one,” said his wife, Stephanie Caradine-Ruchel, “but I've never met anyone so dedicated to their work — to the people in the town and also to his men. Everyone tells me what a great job he does.”

His dedication relates to that early campaign promise to get back to everyone. At the end of a long day of snowplowing or other duties that take him out of the office, he returns to read every e-mail and listen to every voicemail message, calling residents back one by one to address their concerns.

“I like my job,” John said. However, despite preparing to run for another term, he is looking ahead to retirement. His dedication to his job and the town has kept him from taking many vacation days, so he hopes to retire while he's still able to travel. He dreams of seeing Arlington National Cemetery and walking the battlefield at Gettysburg.

Until then, he spends his downtime pursuing a lifelong passion: racing.

These days, he can often be found competing with his big block dirt modified car at the Lebanon Valley Speedway with a pit crew consisting of a few friends or his dad, who started taking him to races when he was just four years old. “He still helps out when he can.”

For now, although he may not be knocking on doors to get re-elected, the incumbent superintendent will continue to get up at 3 a.m. and 5 a.m. to check the weather forecast to determine if he needs to call his crew in early to clear snow. He'll continue to push for a bigger budget to enable him and his crew to do their job better. And he'll continue to look out for the welfare of his crew and his town. ?