Highway Superintendent Mike Graham and the Town of Kingsbury 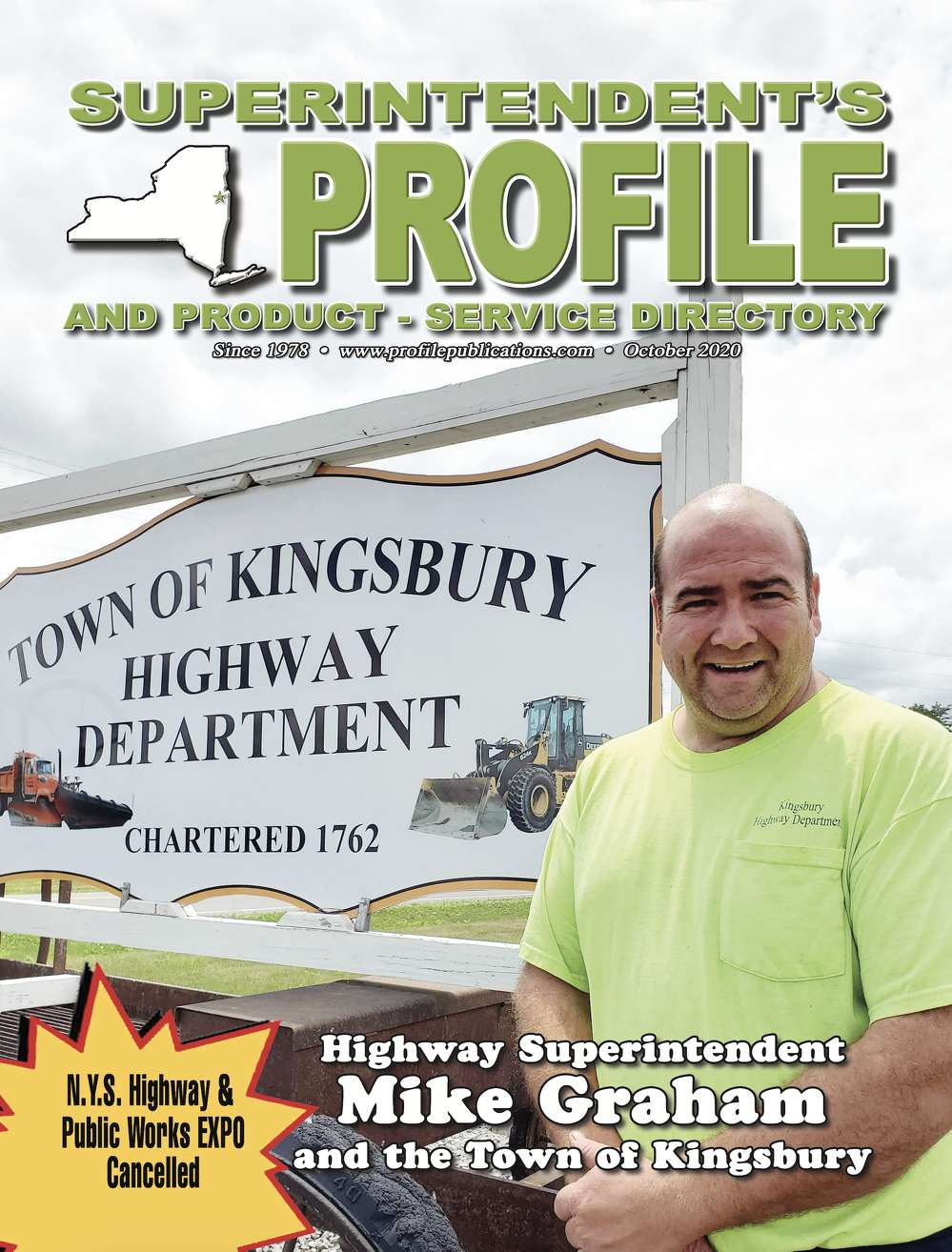 When Mike Graham became highway superintendent of the town of Kingsbury at 27, he was among the youngest to take office.

“My father was the superintendent before me,” he said. “In 2008, he was diagnosed with brain cancer and passed away in 2009. That year, I ran against his deputy and won. It was like passing the baton. Much of me wanting to be highway superintendent was because of my dad. I wanted to follow in his footsteps.”

Mike went to school in Hudson Falls and attended BOCES for construction trades for building houses.

“When I was in my teens, I worked for a carpenter and then Graves Brothers. After that, I poured concrete for J.D. Boucher in Hartford.

“From there, I had my own lawn care business — Michael Graham Lawncare — for four years. In 2004, I went to work for Peckham Industries as a screed operator. I ran the back of the paver. It was my job to be sure the depth was correct for the blacktop when we were paving. I did that until 2009.”

As for today, an essential question regarding current operations is how the department is holding up with COVID-19.

“Everyone's still working. We got back to full staff yesterday [June 9]. We were doing half-crews for a while — week on, week off. Half-staff was challenging. It seems to be working out okay now. We're playing catchup. We were able to get by, but a lot of things fell through the cracks. 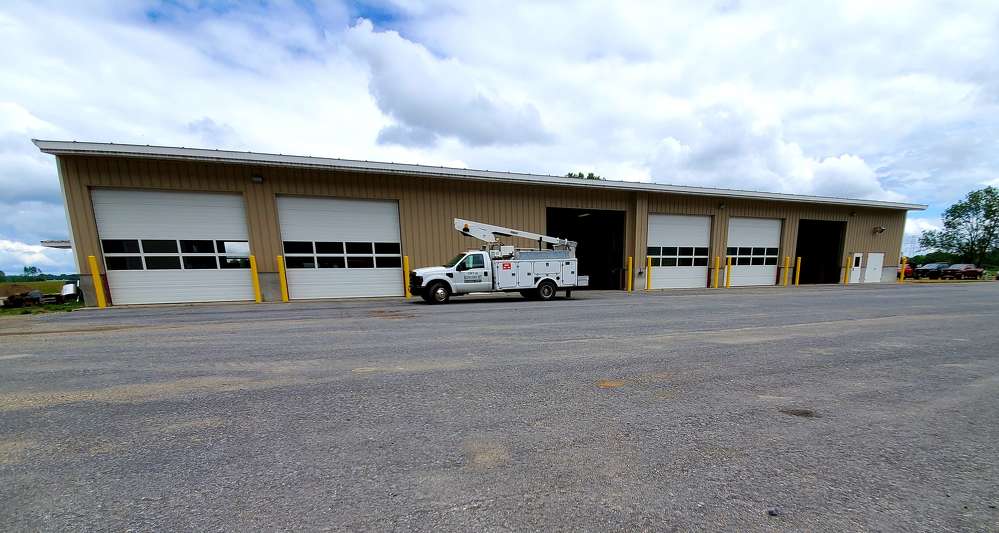 The highway department was able to save $1.1 million when it built its new highway garage. Mike’s father started a fund in the mid-1990s and every year he put $100,000 away. Now, the department only owes roughly $400,000 on the new facility.

“Could we have done full staff? The board recommended we didn't. At that point, everything was uncertain with Corona. I knew if we did half-staff, we'd have a better chance. If one of us had it, it wouldn't shut down the whole highway department.”

Mike is a member of the NYS Association of Town Highway Superintendents.

“I came on there four years ago as an executive committee member. I'm also the treasurer for the Washington County Association of Street and Highway Officials; and master of ceremonies for our annual banquet for our members and superintendents. We were supposed to celebrate our 65th anniversary on the steamboat in Lake George in May but due to COVID-19, it's been postponed until October. In addition, I just became a member of the Moss Street Cemetery Association. We send letters to the public to get donations to keep the cemetery running.”

Don't be fooled. It's not all work and no play for this highway superintendent.

“I like to travel. I go to Cancun and the Dominican Republic frequently. I prefer Cancun maybe because it's friendlier. I'm younger and there's more of a partying vibe. I also do small jobs with my backhoe and ride my snowmobile. Didn't do much of that this winter — not enough snow.” 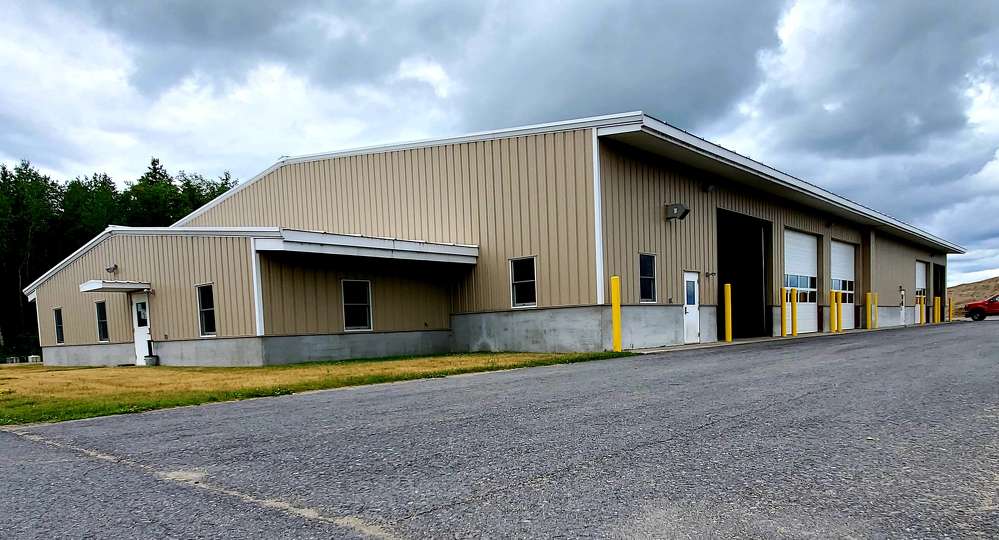 Mike and his department built a new highway garage in 2014 at a cost of $1.7 million.

The highway department's main building houses its administrative offices, the water department, a breakroom and a 40 by 60 cold storage building.

“The shop sits on eight acres. It's 90 by 160 and the office is 20 by 55. There are also 11 bays and our salt shed, which is 26 by 54 and holds roughly 350 tons. We do a mix of salt and sand. A half-ton of salt to a load of sand. It's too expensive to run straight salt. We also have our own pit about five minutes away that's around 26 acres. That lets us screen our winter sand and gravel. We screen for a month. I can screen about two years' worth of winter sand, which is about 7,000 yards and we go through about 3,500 yards each year. We have a stockpile here at the shop.”

As superintendent, it's Mike's responsibility to maintain the town's 106 center-lane miles of road; 90 of which are paved and 16 are gravel. That translates into four plowing routes that take between three and a half hours to complete.

“My crew is the best. Each one has a unique talent and together, it's a dynamic force. I can't say enough about them. They're a great bunch of guys.”

Under Mike's attentive eye, the town of Kingsbury's highway department functions on a total operating budget of $1 million.

To help with its daily operation, the department has an armada of vehicles to get the job done:

In these fiscally challenged times, Mike is one of the lucky ones — his crew can do much of the maintenance in-house. When it comes to new technology, however, it's a different story.

“It's more expensive because you can't work on them anymore. Everything must be plugged in. The system, urea SCR or urea-based selective catalytic reduction, is the only technology available that can remove enough NOx from diesel exhaust to comply with strict new limits imposed by the US EPA. That's not only creating a problem, it's expensive to clean the systems.

“Now there's a DEF [diesel exhaust fluid filter] that goes into the equipment for the emissions. It cuts down the soot and exhaust coming from your vehicle. Looks like a big honeycomb. On our loader, it looks like a beer keg. It heats the fluid to 1,200 degrees and burns that exhaust off. The problem is the soot gets caught in those honeycombs and it has to be professionally cleaned. The cost is anywhere from $1,500 to $10,000, even $15,000, to replace it after so many years. That's where it gets expensive. The days of just making sure you have spark isn't the case anymore. Someone must come in with a computer or send it to the factory. The computer and software are upwards of $10,000. We've needed to use it at least a half-dozen times in the last year. Some of it's been as little as $500 and I've had a couple of $3,000 bills. Probably $6,000 or $7,000 in the last year in expenses related to that. You have your regular maintenance wear and tear but due to the technology, it's getting more expensive.”

Is the technology worth it?

“Yes and no. It's definitely nice and comfortable, but when it breaks down, it costs a lot of money. We're fortunate to have the money to have someone do that; to do some of the exhaust cleaning work. Any other kind of maintenance we can do in-house.”

With that said, how do you budget for new equipment?

“I try to put away $80,000 a year in equipment reserves. That works well for us. We've been able to purchase everything with cash. We own everything. My father got the department on the right path when he started in 1994. I've worked hard to continue to do that. We're lucky. We can pay for everything. Some superintendents can't get money to save their lives. Unfortunately, that's more often than not. Our town is unique in that aspect. I'm not saying we're rich by any means, but we're in a good place.”

After 11 years at the helm, what has surprised Mike the most?

“The public. We have 5,500 residents. Some are great and others … not so much. It's funny how some people are so genuine and gracious and thank you and others want something simply because the neighbor's getting something.”

What's been the best day on the job?

“It was about four years ago. When we put a tube [culvert pipe] in with the late Bob Humiston. It was a shared tube on the town line of Argyle and Kingsbury. It was cool because it was a first for both of us. It was 80 feet long, 18 feet wide and 13 feet tall. It came in pieces so we had to bolt it together.”

“We had a micro-burst come through Kingsbury in May 2017. It wasn't a tornado but it would gain power, pick up and then when drop out. It would gather up energy, take out a swath of trees, lose it and then pick up again. It would hopscotch about quarter of a mile. One point in the town of Kingsbury had nearly all the roads closed with at least one tree down on every road. It only lasted about 15 minutes but it did a lot of damage. That was one of the worst days we've had. I hope I never see something like that again.”

And his least favorite part?

“Snow. When you're plowing all the time, you don't like seeing it. We were light on snow this year. We had more rain. That creates issues because people don't realize the dirt roads freeze and an ice glaze forms on them but not on the blacktop. I never thought that. I thought it was the opposite. The blacktop will hold the heat and melt it while the ice collects on the dirt. With the dirt roads, I have a guy who has the majority so he doesn't have any salt with his load. He runs straight sand on the dirt. So, the dirt doesn't take out that frost. Otherwise, the salt would get through and take the frost out of the road.”

Proudest moment? “Being elected at 27. I was the youngest superintendent in Washington County. I had a whole new way of looking at, and doing, things. I have a lot of respect for the county guys. When I worked at Peckham, I paved all the town roads for them for seven years so it was a nice transformation. Now I'm superintendent so it flowed right in. My father would be proud.”

Always thinking ahead, Mike has his sights set on doing an “overflow for our town court parking lot. We started working on it last fall. It's probably one of the biggest projects we have this year. It's an 85 by 120. With everything going on, it's up in the air.”

Fast forward. How long would Mike like to stay on as highway superintendent?

“As long as the residents will have me.” P