Superintendent of Highways Don Wood and the Town of Seneca Falls 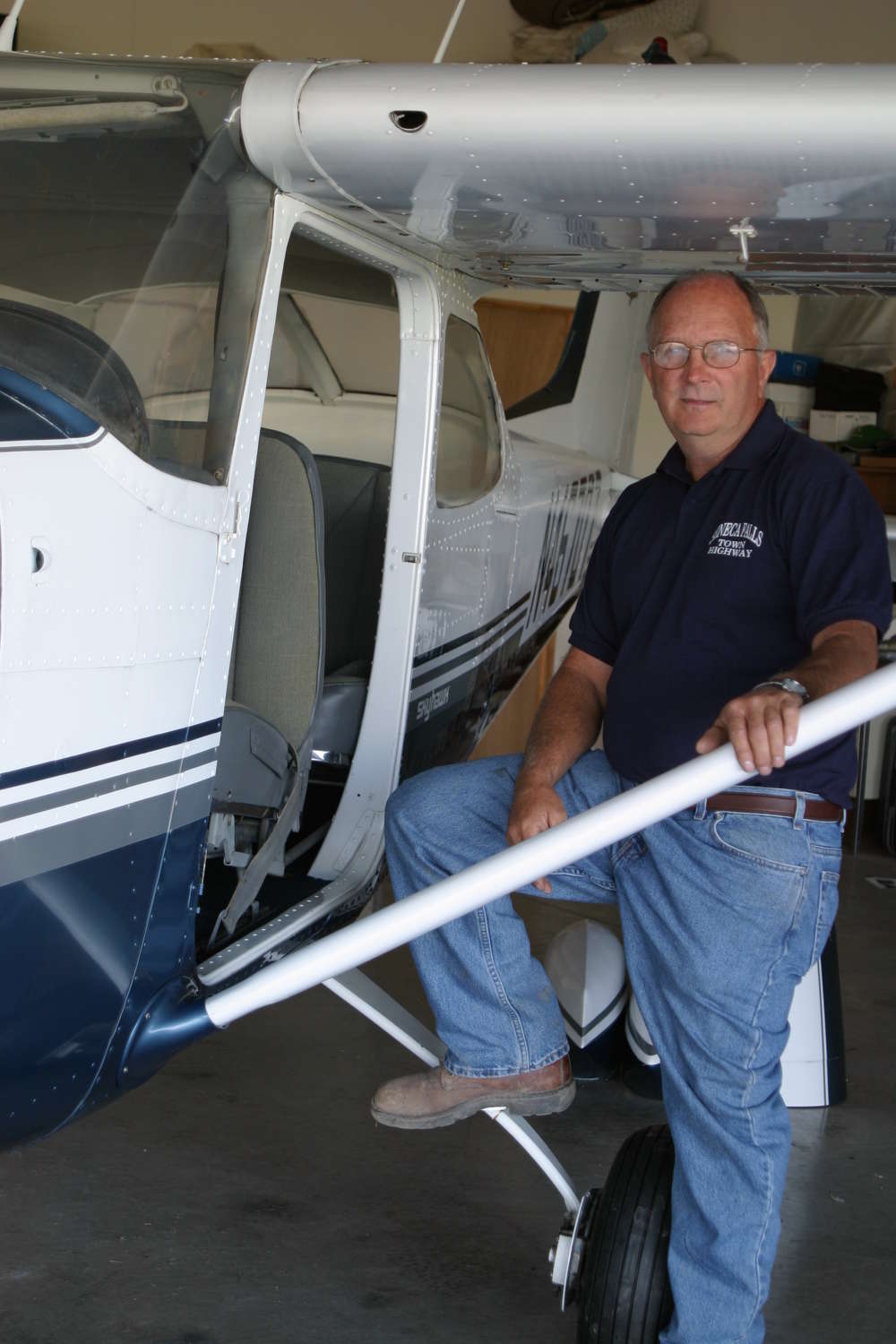 Anybody who enjoys older movies has probably seen director Frank Capra’s 1946 classic film “It’s a Wonderful Life” starring Jimmy Stewart — a man who finds out, just in the nick of time, what life is all about. What viewers probably don’t realize is that Capra probably based this iconographic, small-town American story (set in “Bedford Falls”) on a real place called Seneca Falls, NY.

If you have any doubts about it, just read the bronze marker on one of the village’s bridges that span the historic and still active Erie Canal. Seneca Falls, also the birthplace of women’s rights, which began with a convention there in 1848, has more than a passing resemblance to the town in the movie. Its beautifully restored Victorian architecture is reflected in the canal, which once bustled with commerce and now has become a major inland water destination. Signs around town commemorate local history — everything from Amelia Bloomer’s famous, racy, fashion statement that honors her last name, to the rental of replicated Erie Canal boats for adventure seekers.

A downtown village-wide revitalization campaign has made it a fine place for antique hunters, canal side dining, and the National Women’s Hall of Fame, which each year celebrates new inductions of women leaders in social reform, politics, science, athletics, and the arts. Nearby, the Women’s Rights National Historical Park also has its share of visitors.

Nestled between two pristine Finger Lakes — Seneca and Cayuga — it’s not surprising that the town’s highway superintendent, Don Wood, also is a native son and a person who never left his hometown, with the exception of two years serving in the armed services.

“I was a town councilman for 11 years and on the town board,” he explained. “For 10 years I chaired the Highway Committee, so I had a good idea of what the issues were.”

Following 23 years working as foreman for Kelsey Construction building homes, Wood said he was quickly losing his enthusiasm for home building, and he was ready to accept new challenges, which is why he applied for town highway superintendent. After winning the election in 1999, he has run unopposed for his past two terms on the job. He added, “We get lots of compliments on the way we keep the roads.”

To stay on top of his game he attends superintendents classes at Ithaca College and is active in several associations, including being the secretary/treasurer for the Seneca County Town Highway Association and the New York State Highway Association. 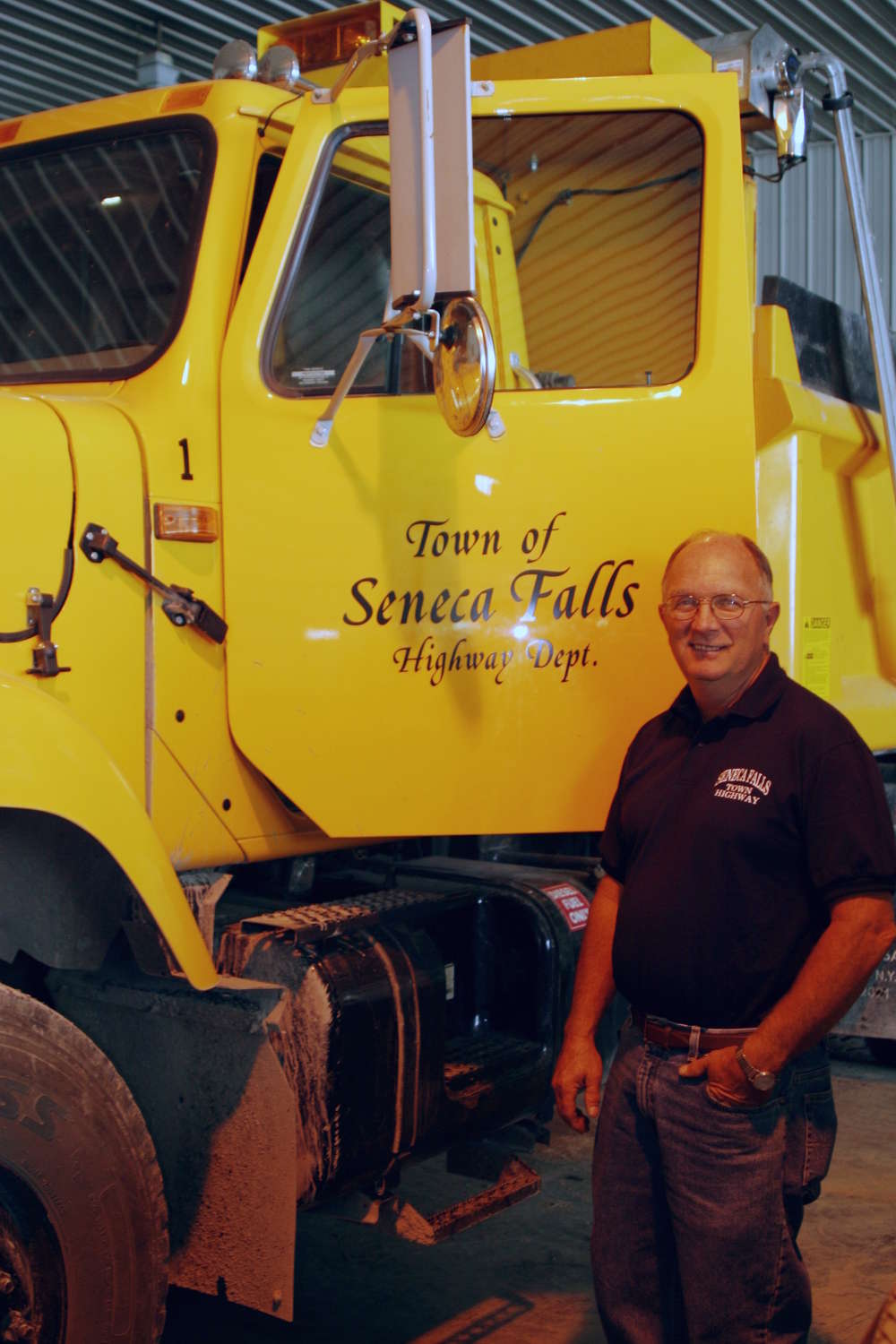 Wood is a hands-on kind of guy, although some of those hours are spent on the computer checking on weather, facilitating the payroll, and paying for materials, supporting a budget of $415,000 this year. All maintenance updates are computerized, and every phone call is returned personally. Wood said his department works very well with the town board in having its equipment requests met. Since the close of New York City’s famous Fresh Kills landfill site, Seneca Falls now has the largest active landfill and recycling operation in New York state.

The result? What Wood called, “landfill money” that pays for most of the town’s highway needs, keeping the 23, two-lane road miles —much of it bordered by soybeans and field corn and some housing developments — in tiptop shape. All of the town’s remaining dirt roads have been upgraded and reconditioned with stone and oil during his tenure as superintendent.

Being located in a snow belt known for continually light, but daily, snows and windy conditions across many of the town’s roads, the town relies on the highway department’s collective expertise with snow and their Viking plows to get the job done. Wood routinely wakes up in his lakeside home around 3 a.m. during snow season to check the weather and to assess local conditions on the Internet. He estimated that each of three plow routes takes just under four hours to complete. Highway salt, treated with molasses to improve its sticking abilities, is often targeted for intersections and hills. Moreover, the town crew keeps approximately a mile and a half of village sidewalks, snow- and ice-free, usually using the Bobcat with a snow-blower attachment.

Paving and addressing water damage take up a lot of time, but the continuation of a HDPE polyethylene water system throughout town roads is what occupies much of today’s focus and accounts for many of the phone calls they receive.

“Everybody wants to know when they can hook up to the water,” said Wood. Developments, including the Kenmar subdivision of high-end homes located on streets named after American generals, are springing up along the highways.

“We’ve found that by laying 40,000 feet in four years, we can realize our town’s water project goals,” said Wood. “We thread the plastic pipe like a needle, pulling it through the trench with a Bobcat. We can even turn corners with it. The 40-foot lengths we use are fused with a machine that generates heat to seal the pipe sections.” 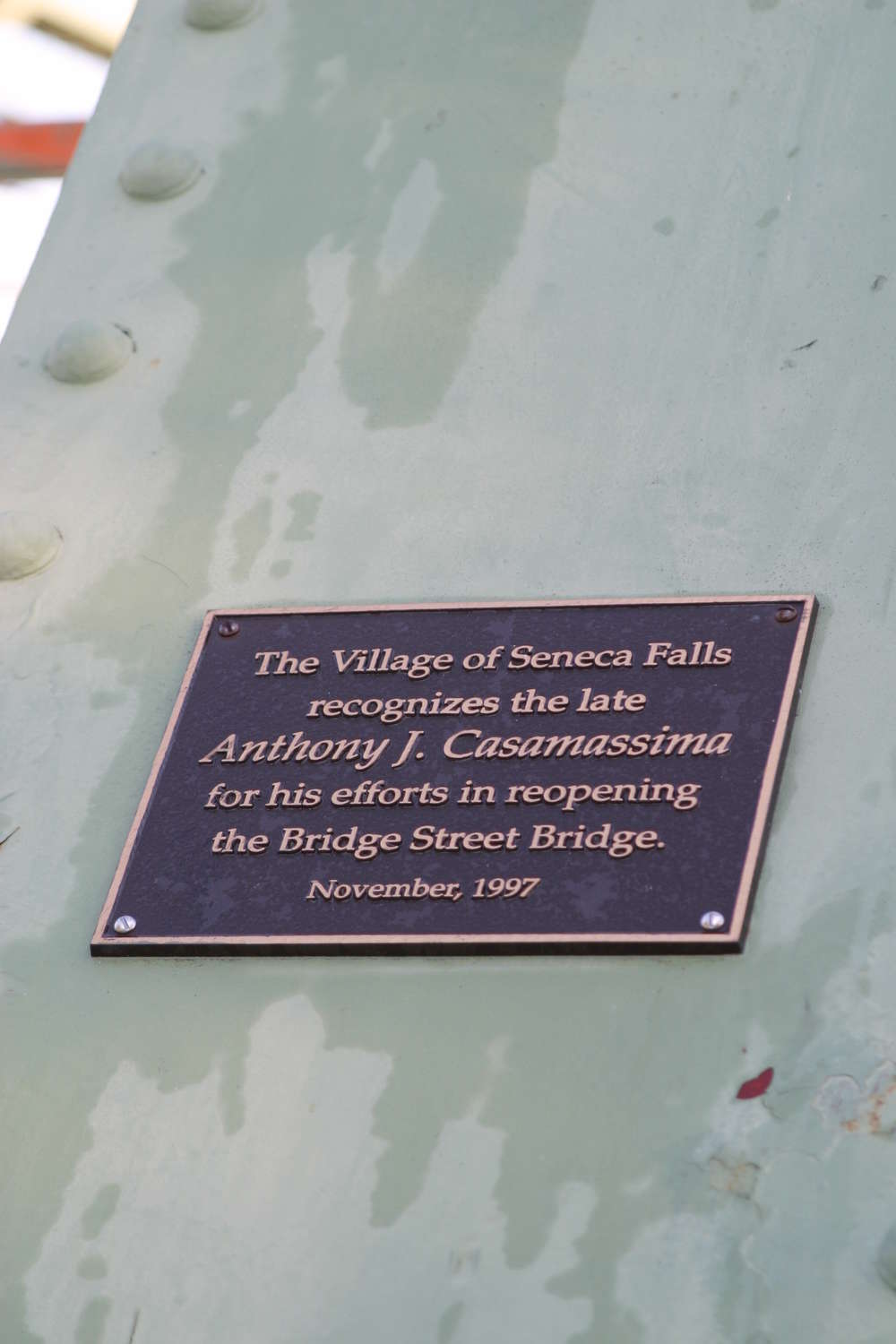 Wood said that eventually every road in Seneca Falls will have water. Furthermore, because his department did the work, the town will ultimately realize approximately $2.5 million in savings. Wood and his crew were the low bidder for the job with an estimate of $20 per foot, compared with the next lowest estimate of $45 per foot.

Although saving money is key, the town appears to be on a winning streak of some kind. Just like in the movie, “It’s a Wonderful Life,” streets and sidewalks appear to be neat and tidy. Turn-of-the-century village stores are occupied. Wood handles the town roads, some state roads, and a little sidewalk work while the village Highway Department concerns itself with downtown. The state takes care of the Erie Canal.

Seneca Falls just completed a $3.5-million recreation center. There is even an art-infused walking trail. “Because of the landfill [called Seneca Metals and located in the northwest part of town], Seneca Falls has a tax base of zero,” explained Wood. “If it weren’t for the landfill, we’d be paying a lot more in taxes.”

Although highway superintendents in these parts are not required to actually be on the job, they can just supervise, Wood enjoys the heavy work with a shovel, or climbing around down in an excavation pit, or helping to bust up an ice jam on Noble Road with a Badger. Along with his two crew members, Jim Peterson, who is deputy superintendent, and David Oslowski, the three men represent approximately 27 years of experience in highway work.

Off the job, they also all belong to the Conoga Sportsmen’s Club. Wood’s office is decorated with wild turkey and deer trophies as well as photographs of his wife, Sher, and his kids, Aaron (age 15) and Jennifer (age 13).

The Seneca Falls highway department uses outside labor for other chores, including mowing as needed on the department’s John Deere Tiger mowers. 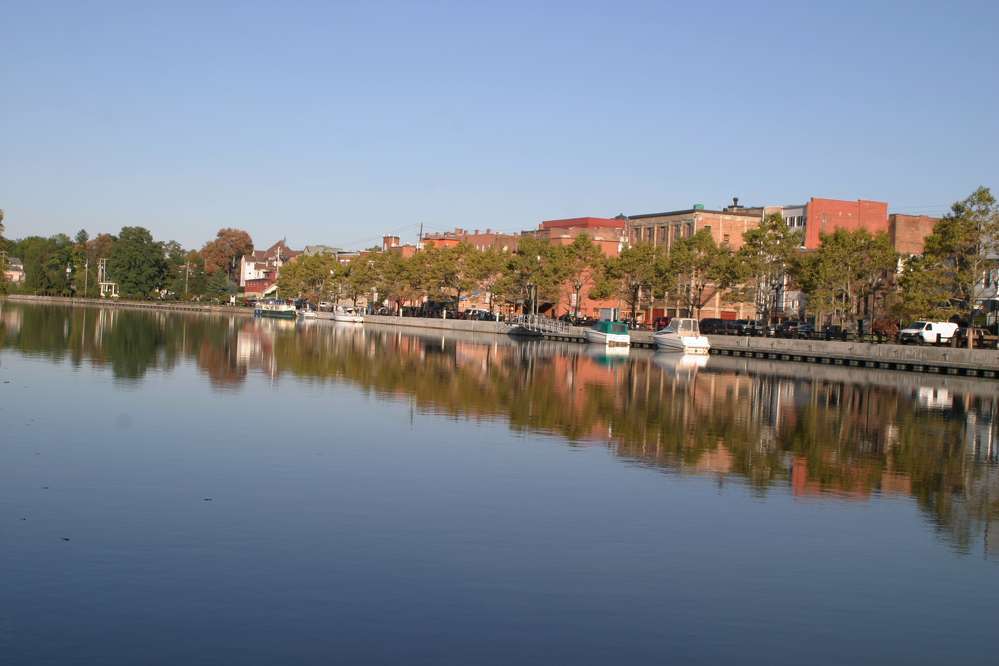 “When we rent equipment, we use Seneca Pipe and Paving for things like excavators, pavers, and miller machines,” said Wood. When core samples are needed they outsource the task to Suite-Kote.

The department of three enjoy what they do for people, many of whom they know very well. One good example of the department’s collective sense of humor can be found in the highway equipment garage, where many pieces of “art” that have been collected while cleaning the town’s highways have been hung for all to appreciate.

The subject matter for this roadside collection ranges from corny to religious and nearly all of it is poorly done. A note on the department’s blackboard reminds Wood and his crew to deliver the town’s voting machines. It seems appropriate in a town that started the practice of giving all women the right to vote.

The site features a homemade 32- ft. by 48-ft. pole barn with storage for Bobcat attachments, highway signs, safety cones, and trailers. They also constructed the 40-ft. by 20-ft.salt shed that can hold almost a year’s supply or approximately 1,200 tons of the stuff. They made a roof over the fuel pumps. The highway garage itself - a fairly spotless 80-ft. by 80-ft. building with a 24-ft. by 24-ft. bay, office, bathroom, kitchen and utility room —was built in 1995, before Wood’s time, and is named for the former superintendent who died just three months following his retirement.

“Things were pretty poor when I got here,” said Wood. “They were using an old Army truck for equipment. Trees were growing right up to the highway in most places.” 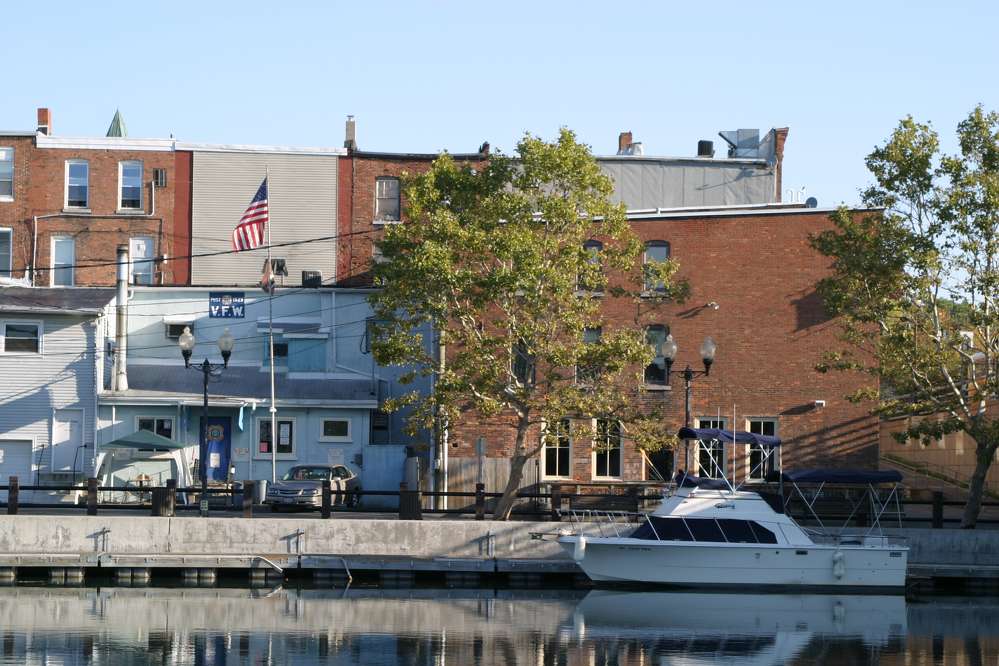 Clearing trees — for example the recent removal of 41 Osage orange trees, which the farmer who owned them later made into fence posts — makes the roads safer from deer hits to cars and easier to maintain. Recreation also has been addressed with a wider shoulder along many town roads for use by bicyclists and roller blade enthusiasts who locomote from the village of Waterloo to Keuka Lake State Park using the 1.5 miles of the Arthur Baker Bike Trail that runs through Wood’s territory.

Wood said his crew often addresses people’s needs, such as extending a snowmobile trail to help keep snowmobilers away from highway traffic. In the near future, Wood and his crew will help create a separate paved path for bicyclists, several feet from the highway. The path will follow what was once an old trolley car track, and Wood and his men have already unearthed some of the former trolley path’s metal spikes.

Once again Wood sees new energy influenced by older traditions, which is so characteristic of Seneca Falls. For Wood and the Seneca Falls Town highway department, it appears to be a wonderful life. P