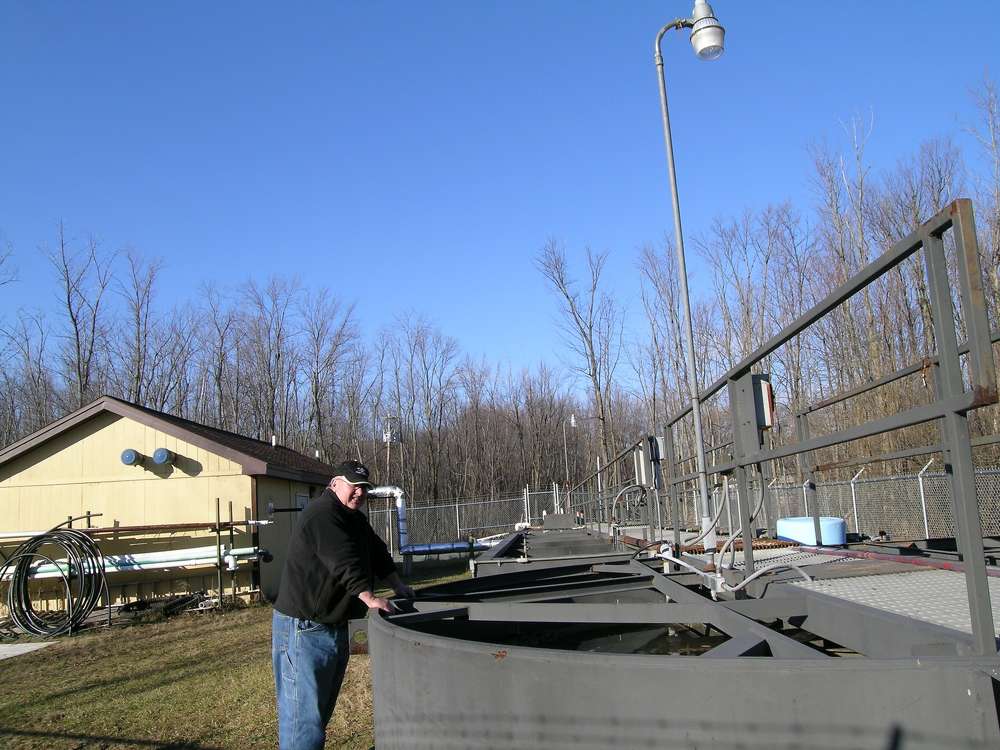 But that’s not a new emotion for Elwin Fisher, the superintendent of Highways of the Town of West Monroe, a tiny bedroom community of approximately 6,800 people.

As the West Monroe native wraps up his 27th year on the job, Fisher, 63, looks forward to traveling with his wife of 38 years, Joyce.

But he’ll always miss the good ole’ days and how his crew seemed to be more appreciated back then.

“It seems that 27 years ago, the work that we did and the hours that my people worked were very much appreciated by the residents. Now, it seems to be expected,” he said.

Fisher’s appreciation for the past sparked him and his department to maintain a 1958 Walter truck — the mere mention of which sparked a joyful sigh.

“I can’t just get rid of that truck,” he exclaimed. 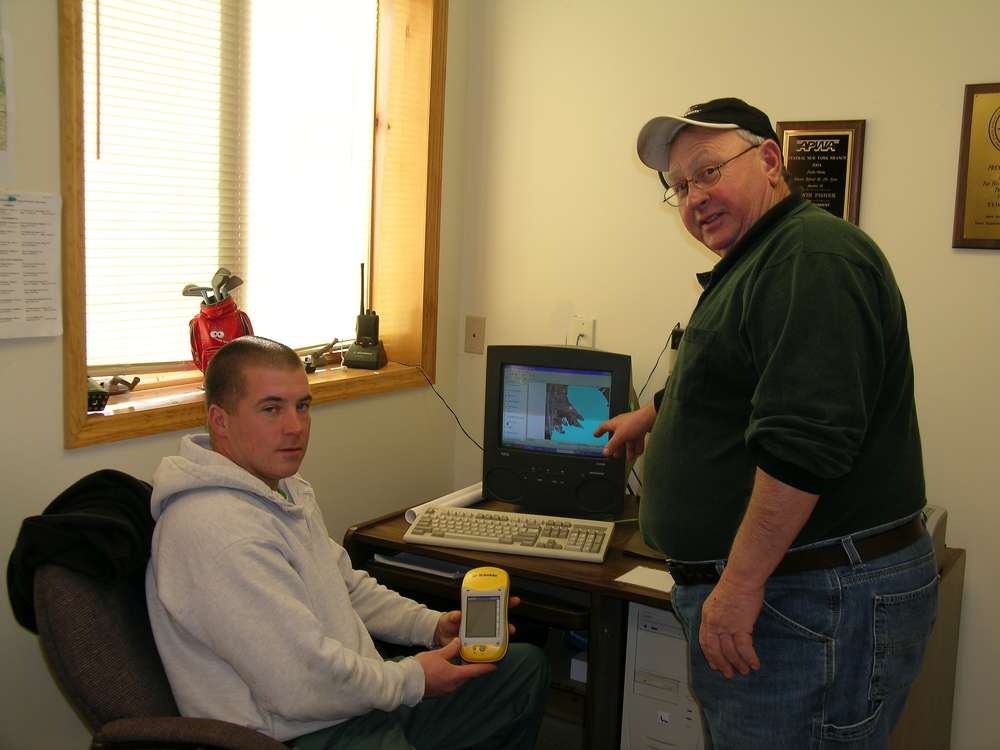 The truck was produced two decades before Fisher was first elected as superintendent, but he decided to spruce it up for West Monroe’s 150th anniversary in 1989. Once or twice a year, the road crew will bring it out of the garage and run some oil through the engine.

And on occasion, they’ll even put it to work during the biggest of snowstorms.

“God forbid if it broke down. I don’t think we could ever find parts for it,” he said.

The Walter truck, one of the first positive four-wheel-drive trucks on the market, was purchased by Donald Shaw, West Monroe’s superintendent from the mid-1950s to the late 1960s. Shaw also was president of the New York State Association of Town Superintendents of Highways in 1965.

“He told me I ought to get involved with the state association many times,” Fisher said. And, toward the end of his career, he complied.

Fisher served on the association’s committees since 1998, and was named its president in October 2003.

This position thrust him into the world of Albany politics, but he always thought of his job, even at the local level, as one with political ramifications.

“If people don’t like you, you’re gone,” he said. “It’s political whether you like it or not.”

Fisher said he was obligated to do the best job he could because his career was placed in the hands of the voters every two years.

He’s not sure if it’s because he performed his duties well or that nobody else wanted to take on his responsibilities, but Fisher’s name went on the ballot each time without an opponent.

When Fisher became active in the state association, he learned it was vital to get to know the representatives, since they’re the ones who control the money. He said there’s no magic trick to working with the state government.

“I wish I had the answer. Everybody’s going to do the politics differently.”

Through his work with the association, Fisher said he learned some valuable lessons. He said dealing with other superintendents from throughout New York taught him he wasn’t alone in dealing with the issues of his town and its 38.5 mi. of roads.

The job is the same in any size town; it’s just done at a greater or lesser scale. Good ideas born in small towns are just as likely to be used by bigger towns as the other way around.

In addition, he found his fellow superintendents to be a wealth of knowledge when it came to researching certain types of equipment. What works well for one highway crew would likely work well for another.

Fisher’s activism in his field started at the county level. He was vice president of the Oswego County Association of Superintendents of Highways in 1985 and 1986 and president from 1987-88.

His proudest moment as president of the state association can be summarized in two words — Alexandria Bay.

It’s not the location of a major roadway or any other project, but the place where he achieved a greater participation in the association. For many years, the association held its annual convention at a resort in the Catskill Mountains.

It had become quite obvious in recent years that participation and enthusiasm in the event had suffered. In an effort to re-spark the excitement that once surrounded the event, Fisher suggested it be moved to a different location each year.

Initially, the concept was met with resistance. Even with the lackluster attendance, some association veterans had become comfortable with the annual routine. Fisher was able to change their views and moved the October 2004 convention to Alexandria Bay, which boasted large numbers of attendees and exhibitors. It was the most successful event hosted by the association in more than a decade, Fisher said.

This increased interest in the association will likely create more clout at the state level for his colleagues. With more superintendents actively involved in the association, more of them will be talking about it with the state’s policy makers.

And the effects will be felt in their hometowns, too.

”If you’re more informed about what’s going on, you’re a better superintendent,” he said.

Fisher will be replaced as president by another superintendent from an upstate rural town, Herb Allen of Canajoharie, Montgomery County, the association’s current vice president.

His advice? “Be yourself. Get to Albany. And know your way around.”

The pride in his accomplishments also can be found in the form of a 60-by-100-ft. salt barn. It’s not like this is a special type of barn, but a physical reminder of how West Monroe has always come up with solutions to its problems — their salt and sand storage area is located near the banks of a creek. Built in 1993, it was one of the first salt barns in the area.

The salt in this shed is used each winter to help what seems to be a never-ending struggle with snow. On average, West Monroe is faced with more than 200 in. of the white stuff and it is not uncommon it has to deal with 5 or 7 ft. of snow during a week in the peak of winter.

Fisher said New Yorkers do not tolerate impassible roads throughout the state. People are satisfied with nothing less than bare roads, which means his crew will put in 14-hour days, seven days a week from the end of December to the beginning of March.

The demand for clearer roads has increased as the local work force has evolved. When Fisher first took the job, local farmers were happy just as long as the tanker truck could come to pick up their milk.

But as more women have started to work outside of the home, the increased number of commuters has put more of a demand on the road crew.

To meet those demands, Fisher has had to maintain a modern fleet of snow removal trucks — a far cry from that old Walter truck they now reserve for parades.

Their task each snowstorm takes the West Monroe crews beyond the municipality’s roads. The men and their fleet of trucks also are responsible for plowing the county-owned roads, another 21 mi.

The plows follow three routes, which take a total of approximately three hours to complete. While not dealing with the challenges of New York’s snowy winters, Fisher has tackled several off-road tasks, including the construction of a sewage treatment plant in 1989, a project that primarily used the talents of the highway department employees.

Also under Fisher’s watch, the highway department built a pole barn in 1985.

Its fleet includes: four 10-wheel trucks, a rubber-tire excavator, a paver, a roller, a bucket truck, a crusher, two loaders, a chipper and two tractor mowers.

They also are responsible for maintaining the sewer system and the town park. West Monroe’s road crew consists of seven people, who work with a $600,000 budget.

As Fisher enters retirement, he will leave an ongoing project to use GPS technology to map West Monroe’s underground utilities, roads and all of the town’s assets.

Approximately one-third of the project, paid for with a grant made possible by State Assemblyman Dave Townsen, is complete, with another two or three years left until its completion.

Fisher has a list of American destinations he hopes to see during his retirement, including Mt. Rushmore and the Grand Canyon. He’ll likely be able to spend more time on the links and with his children, Daniel, 42; Jodi, 36; Keena, 31 and Joyanne, 25.

Fisher said he’ll miss the residents with whom he has worked — some more than others. “Every superintendent’s got their complainer,” he said.

He has been on the receiving end of numerous calls from residents who suffered the loss of their mailbox.

But the good relationships far outweigh the negative ones. The time has come for this career as superintendent to come to an end.

He said he may think there’s not a better way to run the department, but “somebody else might have better ideas than you’ve got.”

Fisher isn’t sure how closely he will pay attention to this year’s election of his replacement, but he’s going to leave the new person alone.

“Once you are elected to the office of highway superintendent, it’s your ball. The only bad thing is, every two years, your job’s on the line.” P Staff