Superintendent of Highways Frank Gavin and the Town of Niskayuna 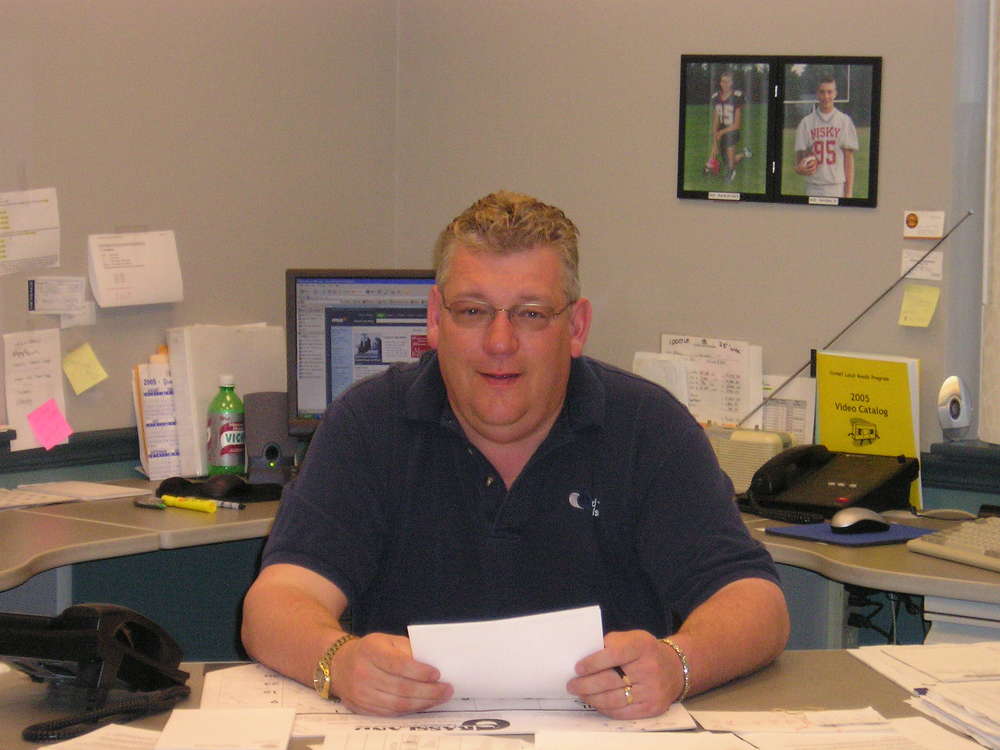 When you think of Frank Gavin, think big!

He is a big man whose presence fills up a room. He sits in a big office, behind a big desk. He is a big Buffalo Bills fan and he has a big job overseeing the Town of Niskayuna’s highway and parks departments.

Frank has lived in Niskayuna most of his life — 44 years to be exact. A 1976 graduate of Niskayuna High School, he worked as a seasonal employee for the town during summers in high school. After graduation, he had a choice: go to work for General Electric (GE) or go to work for the town. It was simple. He chose the town.

It was working with his father, however, that piqued Frank’s interest in the highway department.

“He [my father] worked at GE for years. The company was famous for being out on strike all winter and my father wanted a more regular income. He started with the highway department as a mechanic in the 1960s and then ran the landfill for years. He retired when I became superintendent.” With a chuckle he added, “We’ll leave it at that!”

Most of Frank’s experience for the superintendent’s position came from working with myriad people in the road maintenance field and attending highway and turf management seminars over the past 15 to 20 years.

“During the 1980s I was able to work closely with then Town Commissioner of Public Works Mike Mastropietro in planning many of the town’s larger drainage and paving projects. I held the position of road maintenance supervisor from 1988 to 1996, working under Superintendent Peter Zeltins.”

Frank had years of preparation before taking over the helm of the highway department.

“It took 12 years for me to become the assistant superintendent and another eight before I became super. I was appointed to the post when Zeltins retired in 1996,” Frank recalled. 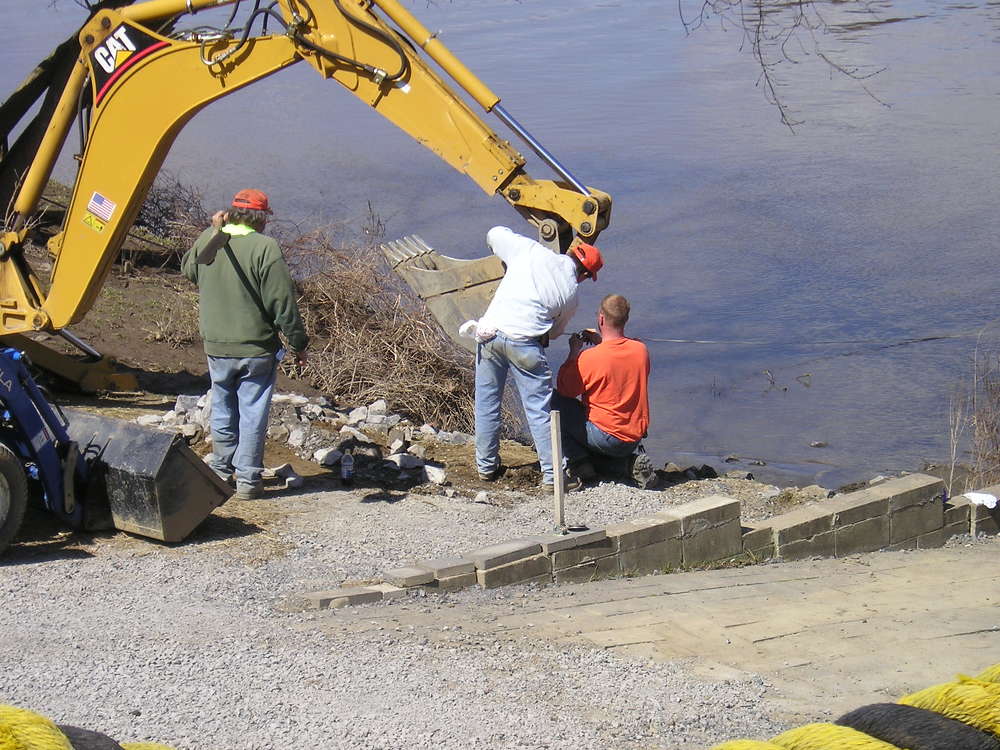 He and his wife, Vicky, have two sons. Trevor, 20, is a sophomore at Marist College in Poughkeepsie and a member of the football team. He works for the town of Niskayuna’s Parks Department during the summer. Derek, 16, is a sophomore at Niskayuna High School and plays football and lacrosse.

In his “spare” time, Frank enjoys golfing and attending his sons’ football and lacrosse games. He is a member of the local county municipal group and serves as vice president on Niskayuna High School’s Booster Club, which supports high school athletics.

During Frank’s tenure, one area that has experienced significant change has been his staff. What used to be a department of 14 employees has grown to 35.

“Now we have taken on the parks department, which consisted of two employees in the early to mid-’90s. Now, we have 10 year-round employees, which includes building maintenance. The highway department has 32 full-time employees that include crew leaders, operators and drivers.”

This time of year, Frank also is gearing up for the influx of summer help.

“We will hire 20 college students, most of whom are returning from last year. Summer help does just about everything except drive the big rigs that require a special license. A parks crew with a member with three years experience will take a 20-foot trailer with two-, six-foot mowers and a one-ton dump truck and a first-year kid and go out alone.”

When it comes to his staff, the superintendent is quick to give credit where credit is due.

“I am thankful my crew is committed to the town and the residents of Niskayuna. They take pride in being one of the best snow removal operations in our area. My department is what it is today because of their knowledge, talent and dedication.”

Even though Frank has more help these days, not much else has changed over the last 10 years.

“Processes are different but the work is pretty much the same. We do the same highway work — road reconstruction — just with larger equipment. Instead of staff on the road with a bulldozer and grader, the machine comes in and pulverizes it so it is gradable right away.”

As superintendent, it is Frank’s job to maintain the town’s 161 lane miles of paved road. That translates into nine plow routes that take between three and one-half to four hours to complete. There also are five sanding routes when only sanders are needed. Each of those routes takes approximately four hours to complete. Crews also are responsible for snow removal at six to eight other town sites, the county library and 22 miles of sidewalk located on state and county highways.

Under Frank’s watchful eye, the Town of Niskayuna’s highway department functions on an operating budget of $2.1 million for the highway and $500,000 for parks maintenance, which includes salaries and benefits for employees and an annual CHIPS allocation of $75,000.

“We are in the process of constructing two new pole buildings. One is 60 feet by 100 feet and will be used by our park maintenance employees. The other building, 130 feet by 72 feet, will serve as storage for all of our equipment,” explained Frank. “The long-term plan is to make the larger storage building our vehicle maintenance shop and turn the oldest building into a cold storage facility. Once the new buildings are completed the town will be able to auction off the off-site storage buildings.”

“We have a five-year purchase plan in place for all large vehicles. The town board has always worked well with us when it comes to updating our fleet.”

Over the past six to eight years the department has acquired:

Maintaining their inventory is a top priority for Frank and his crew.

“We have our own body shop so the sanders are sand blasted every other year. Every four years one of our mechanics fabricates everything. He goes through the dump body, cuts out all the rust and repaints it.”

The highway department also uses a Gas Boy system for fuel and maintenance. Two keys are needed to get fuel — an employee key and an equipment key — and the mileage must be punched in. Once a vehicle reaches 2,500 mi. the system prints out a message that maintenance is due soon.

“After that it will allow you one tank of fuel and that’s it,” said Frank. “No one is allowed to drive it until the vehicle is serviced. We have been using the Gas Boy system for 15 years. It saves us labor, time and maintenance. Any service that is performed is entered into the computer so when it comes time to replace a vehicle I can see what has been put into it each year.”

Over the past 10 years the highway department has:

• purchased a large property and remodeled the building, pool and pavilion for the town’s community center;

• built a town driving range and skate board park; and

• constructed building complexes with the town’s youth groups, which include soccer, baseball, softball, football and lacrosse.

“We have a drainage and road reconstruction project slated. The town has a contractor putting in sanitary sewers through an old subdivision. It is about 1.5 miles of road. Hopefully, that will be our first project once things dry out. We are looking at six to eight weeks for that,” said Frank. “Then we have another seven to eight miles of road to pave over the summer and we mow 500 acres per week in our park system.”

“We will grind the existing path, grade it, add stone and calcium, pave over it and redo the ditches,” Frank said. “About $100,000 per year is spent on that.

“We also have a large paving project at the community center with all new drainage going in there. Six tennis courts at Blatnick Park will be reconstructed, all of the parking lots at River Road Park will be repaved and there are plans for a town dog park and a tot lot.”

If that’s not enough, each year Frank and his crew reconstruct three to four miles of road — including new storm drains — and top pave the road that was reconstructed four years before in case there are leaks or failures.

With an eye on the future, Frank has started laying the groundwork for countywide unification on purchasing.

“Every town in the county bids stone, pipe, blacktop, etc. There are at least 50 items that, if the county went out to bid, we would get a better price. We would use the same person, advertise once and have one bid opening. Now there are six,” Frank said. “It would be cheaper because the county gets a better price. If you don’t like the bid, you would have the option to bid it yourself.”

“One of my goals over the next two years is to get the towns together and look at equipment that can be purchased jointly, the big stuff — graders, rollers. We each would use it for three-week periods and save some dollars.”

Niskayuna is one of the five towns and one city, Schenectady, which makes up the county of Schenectady. Niskayuna lies in the northeast corner of the county, bounded on the west by the city, on the south by the town of Colonie and, separated by the Mohawk River, by Clifton Park on the north and east. The town is approximately 15 mi. northwest of Albany. Its principal points of entry are from Route 7, the Troy-Schenectady Road, and Route 5, the Albany-Schenectady Road, continuing north along Route 146, Balltown Road, at Mohawk Commons.

The town is predominantly a residential community, consisting of 6,372 single-family homes, 1,415 apartments and a modest number of town houses and condominiums. Although much green space has been preserved, there are few large tracts of land left for future development. Approximately 80 percent of the town’s 1.2 billion assessed valuation is residential. Only a small part of its 20 percent commercial development is devoted to retail use, most being general office and medical or health care facilities. A strong zoning ordinance regulates residential and commercial development.

By population, estimated to be 20,295 as of 2000, Niskayuna is only the third largest of the five Schenectady County towns. Rotterdam and Glenville are each approximately 50 percent larger. Niskayuna, however, having only the relatively small land area of 14.1 square miles, is the most densely populated of the five towns.

Niskayuna ranks 72nd of the 932 towns in the state by population. Of the 46 towns in the nearby Capital District — those in Albany, Rensselaer, Saratoga and Schenectady counties — Niskayuna ranks seventh. If Niskayuna were a city, it would rank at just above the midpoint of New York’s 61 cities.

The center of the town lies at the crossroads of Balltown Road and Nott Street. The newer part of Nott Street, east of Balltown, is called Nott Street East. In that vicinity lies the Town Hall, the county’s Elizabeth Harriman Bean Branch Library, the post office, Niskayuna High School, WRGB-TV and banking, grocery and retail establishments.

More than 99 percent of the town’s properties have access to a public water supply. The water usage rate, currently $1.52 per thousand gal., is one of the lowest in the northeast United States. Approximately two-thirds of the water is drawn from wells on town property and approximately one-third is purchased from the city of Schenectady. All but approximately 4 percent of Niskayuna properties are served by one of two sewer districts. Effluent District 1, which lies predominantly to the west of Balltown Road, flows into the city of Schenectady treatment plant; effluent from District 6, which serves the rest of the town, flows to a town Wastewater Treatment Plant.

The town is home to four major parks, one of which houses the town pool, a skateboard park, driving range, 20-acre soccer complex, a baseball complex with seven fields, four girls softball fields, one football field and approximately 9.5 mi. of bike path that follows the Mohawk River from the Town of Colonie to the City of Schenectady. P