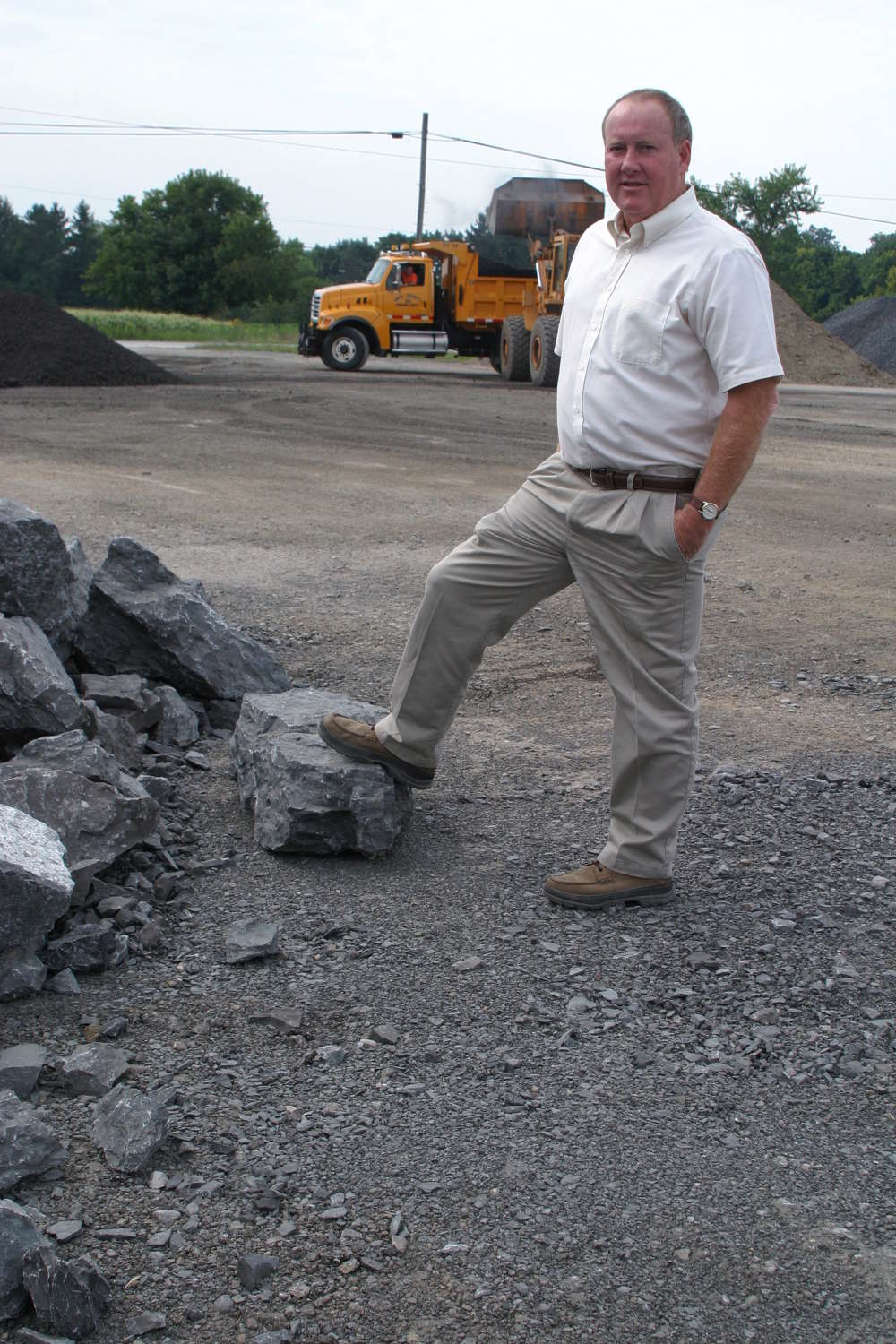 Yates County, which borders three good-sized lakes and where many of its 25,000 citizens still use a horse and buggy on the roads, manages to deliver first-class road rehabilitation and maintenance programs. It’s pretty much a straight-up highway job — they don’t even have a traffic signal — in addition to taking care of the department’s own buildings and grounds.

Agriculture and tourism drawn to the lakeside wineries are the county’s two biggest industries. Yates County is one of the state’s smallest counties both in population and size.

Dave Hartman, Yates County highway superintendent, credits a great crew (29 full-time people), the judicious use of various software programs for data management, and a lifestyle so enjoyable that many Penn Yan natives like him grow up, but never leave home for long.

The department services a total of 45 bridges (five closed). Six of the bridges have condition ratings of less than 5; none are rated below 4. Federal “pass-through dollars” are being used to upgrade two of them right now.

“Do you hear that?” Hartman asked as he drives down Route 14, which, along with Route 14A, provides the major north-south corridor of macadam in Hartman’s territory of 181 lane mi. of two-lane roads.

The hum in the road that is bothering Hartman is a result of the county’s population of Mennonites — an agricultural-based religious sect that still uses horses and buggies to get around, and metal, herringbone-patterned metal cogs on their tractor wheels. They don’t use rubber. Mennonite farmers can put pads over the metal cogs, which tear up the roads when they are on the highway, but they don’t always do so. Where tractors pass from field to field and vertically to the roads, the surface is clearly scarred. Hartman said it’s harder to identify vehicles going with traffic — the ones that cause friction on the brand new 61.5 mi. that the department has done major rehabilitation and reconstruction on. 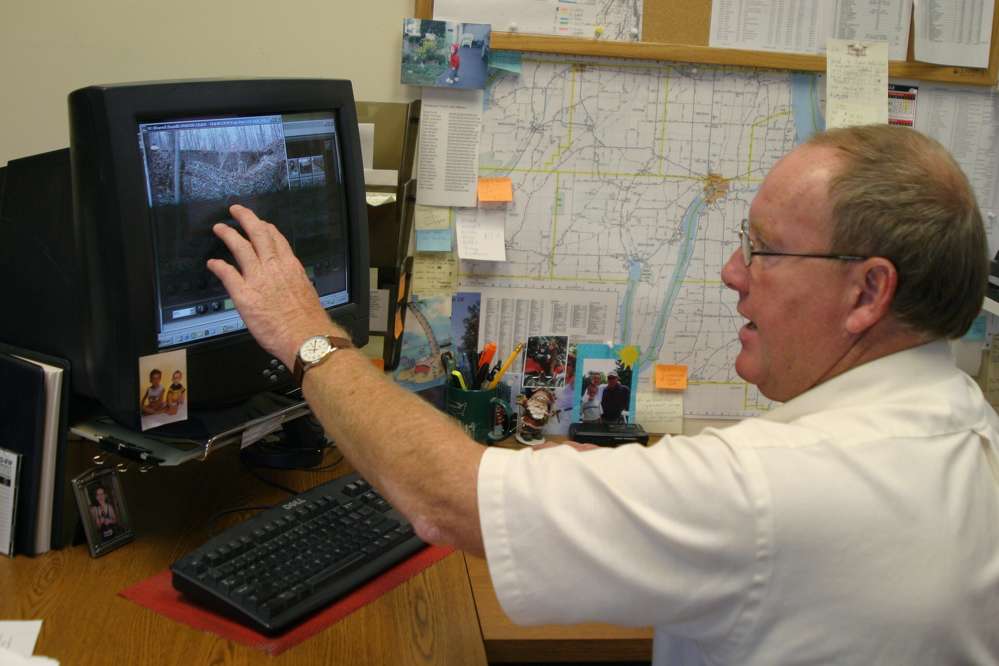 As he does with all challenges in his department, Hartman meets this one head-on by talking to the Mennonite’s religious leader, who agreed that Hartman’s department could fine violators who didn’t use pads on their metal wheels while on the road and, once the word gets out, the leader said to anticipate much greater compliance.

We’ve got some of the fastest growing dairy industry in the state,” said Hartman, “And a lot of that is definitely due to the Mennonites. With their large families, everybody helps out. They lead a very simple life. They pay property and school taxes, even though they have their own schools. The Mennonites have certainly helped the county’s economy.”

Mennonite schools in Middlesex look like scenes from Norman Rockwell artwork with girls in long dresses and bonnets and young boys in flat-brimmed hats and suspenders playing softball in the yard of a one-room schoolhouse. They ride bicycles everywhere. Many Mennonites have fresh produce stands and quilts for sale. Their farmhouses are easily recognizable from the road by their large and elaborate flower gardens.

Highway — Then and Now

“They say timing is everything,” said Hartman. “I was fortunate in 1998 to become deputy on this job to Gordon Mills, who held the position for 15 years. Mills was out for awhile with medical problems, so I was thrown into it. I found I really like the work.”

“Grief counselors came in,” said Hartman, “But nobody here will ever forget that he swerved to avoid hitting someone else.”

Hartman’s background in the Navy, survey work, sewer and water assignments, building roads, and even dams, helped him meet the challenges as highway superintendent. Over the years he also has come to rely on software programs for data management. Staff fills out detailed job tickets on all department activities and materials used. Number crunching, he said, is critical to making good decisions year in and year out.

Back at headquarters, data entry is done by Sue Kurz, administrative assistant, and Donna Kjar, assistant clerk. The result is that within minutes Hartman can determine exactly what his department has spent in time, people and materials, and how much is left for the remainder of the budgeted calendar year.

He uses asset management tools including Carte Graph and Fuel Master for fuel distribution. The Middlesex County Highway Department purchases and provides the gasoline and diesel fuel for the entire county’s agencies including the Sheriff’s Department, public health and social services.

“By looking at four- to five-year averages, I can anticipate how much fuel we will need and about how much it will cost,” he said. He even anticipated the late summer of 2005 rate spike.

Hartman’s office door, marked with a few signs that say “Gone fishing, golfing and NASCAR racing,” is always open to employees and to residents.

Sometimes he said it’s the lack of complaints that can lead one to the belief that he or she is doing a good job, but his drivers report getting thanks, including brownies and pizza, from grateful residents.

Crisis communication is key to how people live their lives these days. And Hartman, building on the state’s and county’s plans and recommendations for crisis communication, is developing a plan for his own department of 29 employees.

It’s one thing to simply resurface an existing road, but in Hartman’s department they go much deeper than that. Before any work begins, letters go out from his department to affected property owners, alerting them to the work that’s about to take place.

In describing his department’s core structure in the field, Hartman said, “It’s me, the deputy, the highway maintenance foremen, four working supervisors, and two sign guys.” The western part of the county is hilly, and road shoulder wash-outs are common during flooding, especially in the Italy Valley and Guyanoga areas.

“When we reconstruct, we do everything including the signs,” he said. Typically the department changes all the pipes in problem areas with pipes up to 5 ft. in diameter.

“Where we’ve done this, we’re not seeing the floods and shoulder washouts anymore,” said Hartman.

Besides installing bigger pipes, his crew removes trees and brush when needed and digs out debris from the ditch itself, followed by hydro-seeding. Hartman said his department has found that if they cut the ditches, making it easier for homeowners to mow, the department saves time and money when the homeowner voluntarily assumes the chore of mowing around the ditch. Sometimes farmers provide efficiencies by leaving some critically placed corn rows to provide a “living snow fence” in addition to 3,500 ft. of the traditional variety used.

Hartman said highway department employees will help hand-harvest the corn so that the stalks remain.

Hartman cites the county’s cutback on the use of highway salt without sacrificing safety as yet another area where data management has led to improved conditions. Paying attention to temperature plays a big part. Hartman and his team all have road temperature gauges in their vehicles to better track Upstate New York’s notoriously fickle weather conditions. Highway salt, after all, is only effective within a certain range and becomes a menace when used improperly.

“We often pre-wet at the spinner,” said Hartman. “That lowers the working temperature of salt and takes it down to about zero.” He said that ground speed controllers help tell drivers what’s being applied per lane mile, but admits that changes embracing moderation didn’t come easily.

“We had guys who were used to looking out the mirrors and seeing gobs of salt coming out of the spinner. They had to learn to trust technology and these units.”

Hartman said that sharing each driver per lane mile usage of highway salt has helped all of them become more critical during applications of salt, sand and the salt-sand mix. He said, “Once they understood what we were trying to accomplish, they bought in.” His department’s efforts help cut their application rates. He said they “were up to a 4:1 mix [sand to salt]. Now we’re at 1:1.”

The “guys,” Hartman refers to by the way, in addition to office staff, includes Robin Merritt, a part-time summer mower and an affable woman who grew up working with heavy equipment on her family’s farm. Hartman said she can cheerfully outwork anybody in the department, including Dave. P