Superintendent of Highways William Masterson Jr. and the Town of Southampton 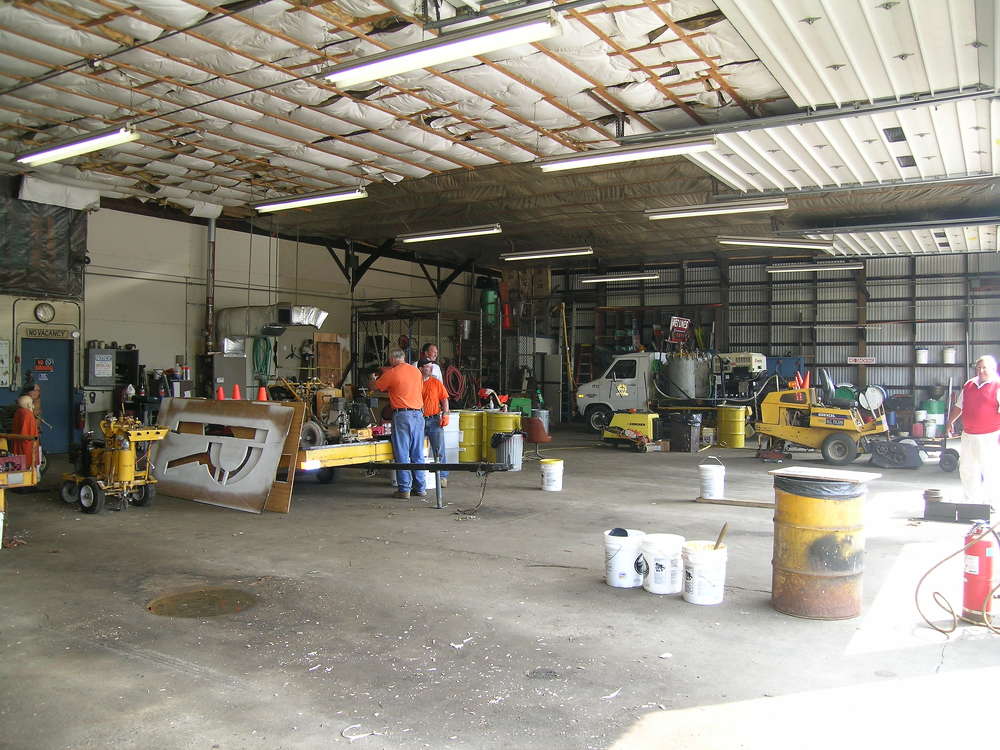 At 62, William Masterson Jr. may have seen his last Election Day with his name on the ballot come and go, but there’s plenty of work left to be done.

As he enters what could be his last term as the superintendent of highways for the Town of Southampton in Suffolk County, Masterson wants to continue on with some projects he helped to initiate.

The 2005 election ended up being a lot closer than he expected — Masterson received 52 percent of the votes — but, he said, “a win is a win.”

Masterson won previous elections by substantial margins, so the close race was a new experience.

A Republican, Masterson said the results reflected a backlash against the Bush Administration and a heavy Democratic push throughout the state of New York.

He credits the way he and the others in his department work with the public for overcoming party politics.

Southampton was the first settlement in New York, a history proudly displayed in its emblem. Under its founding date – 1640 – a pilgrim stands as a ship sails in from the Old World filled with people hoping for a new life. 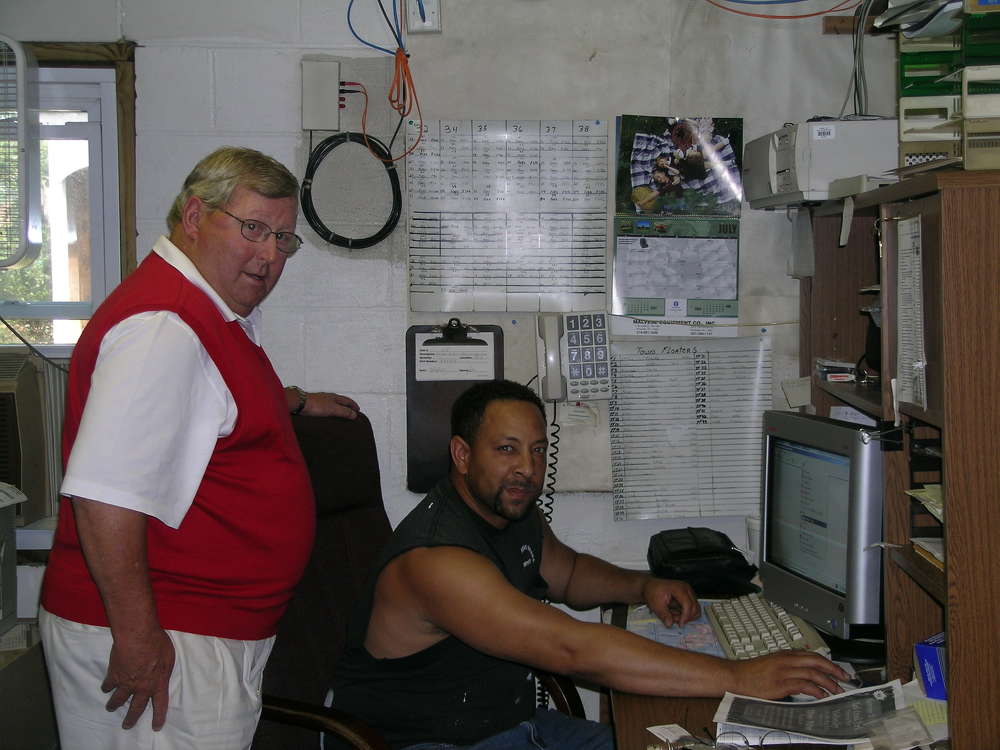 It’s now home to 55,000 year-round residents and another 70,000 people who make their own pilgrimage there each summer.

But even that population continues to evolve. There used to be a definitive wave of people who moved from their New York City homes on Memorial Day and boarded up and packed their things on Labor Day.

Now, there’s more and more New Yorkers who spend their weekends at their Southampton homes.

Masterson was a general sales manager at South Fork Asphalt, a paving contractor in East Hampton, before he was elected as superintendent in 1990. The previous superintendent decided to retire and encouraged Masterson to run for the position. He has been superintendent ever since. 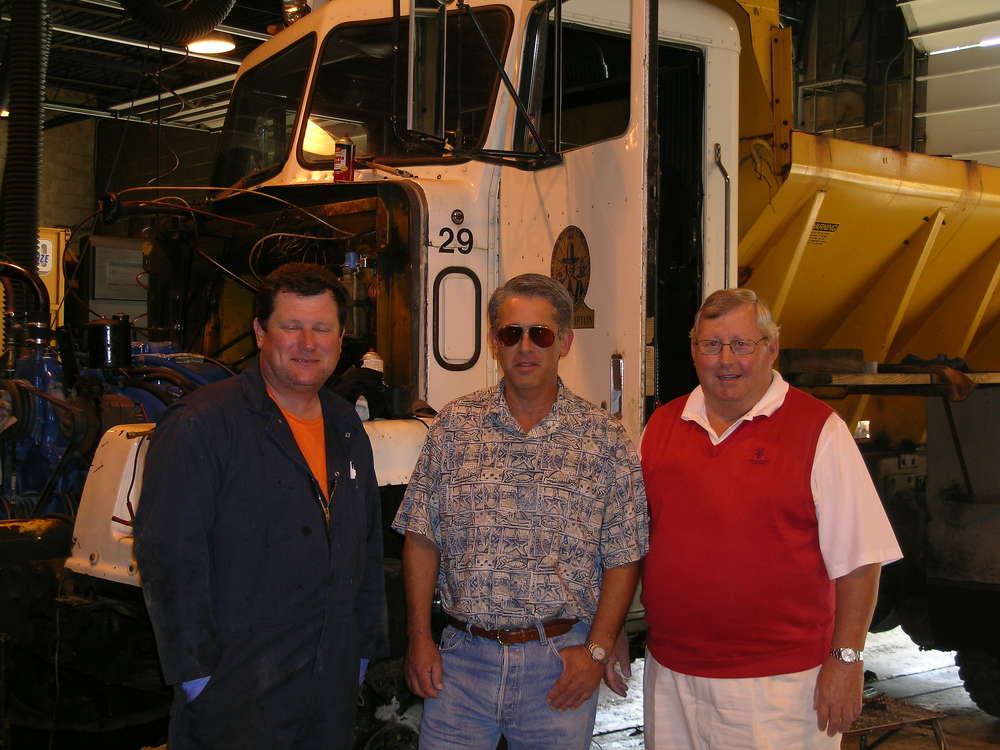 “Fifteen years of experience in road reconstruction and dealing with various types of people brought me great negotiating skills,” he said.

The department has evolved under Masterson’s watch.

“Since first taking office in 1990, my department has come a very long way in every aspect of the highway office,” he said. “In 1990, when a resident called to request work on a specific road, the foreman of that district was given a phone message. Now, we have a computer program, Work Manager, that keeps track of all our calls and all roads within the town, even if they fall within the village or county jurisdiction.”

The 75 employees of the highway department are in the midst of a monumental task that began with one of Masterson’s biggest victories.

In 1999, he acquired the services of a consulting firm, Pavement Services Inc., who helped him convince the Town Board to approve a $50 million bond to repair every one of Southampton’s 900 lane miles.

Masterson said the roads were not constructed to handle the massive amounts of traffic that go through the town.

At the start of each year, his staff sits down to plan how to spend the $4.5 million for that year on roads that need to be totally reconstructed, paved or patched.

Prior to the bond issue, Masterson was allocated just $750,000 a year.

Now four years into the project, Masterson said his crews are on-schedule and under budget.

With all of the roadwork under way, the Southampton highway department tries to maintain communication with the residents about to be effected by the construction.

“Two weeks before any road resurfacing jobs begins, we send all the residents on that particular road a letter about the impending work,” he said.

In addition to recreating Southampton’s roadways, the road crew has been working to improve its stormwater management since 1992, a project that has earned awards from the governor’s office.

The area’s roads were designed years ago so that rain would drain into local streams and bays. He said the designers never considered the fact that this would cause pollution.

The efforts, according to Masterson, have assisted in cleaning up local waterways.

With the additional funds, the department also has installed sidewalks in school zones, reworked intersections and improved parking areas.

With so much on the department’s plate, Masterson credits a solid staff for its success. Among the key player are: Lance Aldrich, deputy superintendent of highways; Mike Rewinski, highway labor crew leader; Labor Crew Leaders Mark McBurnie, Cort Raynor, Mike Merker, Art Webb, Paul Granger and Rich Ross; and John Berdinka, mechanic crew leader. They work 7 a.m. to 3:30 p.m. during the winter and 6 a.m. to 2:30 p.m. in the summer.

The municipality uses the engineering firms of McLean Associates and Cashin Associates.

The Town of Southampton’s highway department has five garages that house the equipment required for each district, although one houses equipment for two districts.

In addition, the department has two tractor-trailers, a bulldozer, a flatbed, a paint machine, a wrecker, two vacons and a reclaimer.

In total, the repair shop, which is housed in its own building and employs seven people, is responsible for maintaining a fleet of 167 machines.

The department’s oldest machines date back to the late 1980s and early 1990s, but the fleet also consists of 18 new trucks purchased in the last four years.

The overhaul of the fleet began approximately six years ago.

“Now, we’re starting to trade in machines that are worth something,” Masterson said.

Asked to describe his best and worst days on the job, Masterson reveals his passion for what he does with a simple response: “There has never been a worst day. I love this job.”

Not to say there hasn’t been challenges along the way, though.

Toward the end of each year, Masterson hopes Old Man Winter makes a late arrival to allow time for the fall leaf pick-up, “a very time-consuming and labor intensive” project.

“There are days where my crews are picking up leaves in the morning and plowing all night,” he said.

But no matter what the weather brings, Masterson and his crew have to get the job done.

If the weather cooperates, all of the leaves are picked up by Jan. 1. In 2004, when the snow started in mid-December, the task wasn’t completed until February.

And speaking of snow, Masterson’s crews are responsible for 64 plowing routes. During a 4- to 6-inch storm, it takes approximately six hours to complete one full loop.

While Masterson won’t have to make a decision to retire or not for a couple of more years, the thing that could keep him at the job is making people happy.

“Sometimes it seems it is such a small thing that will make a resident happy. There are times where their request is out of my hands and I am unable to help them with their problems,” he said. “But when I can help, and they appreciate it, I am thrilled.”

If he chooses to walk away in four years, “my only regret will be leaving behind a staff that has been the biggest asset in the department. They have been there for the town through snowstorms, nor’easters, hurricanes and any emergency that has come our way. They are tireless in their commitment to this town,” he said.

Masterson and his wife, Laura, have three children, Kathleen, 36, and twins William and Ellie, 34.

The Town of Southampton is one of 10 townships in Suffolk County. It is located approximately 80 miles from New York City on the South Fork of Long Island.

Encompassing an area of 128 square miles, or 81,947.9 acres, Southampton is the largest and most populous of the five East End Towns of Suffolk County. Southampton is bordered by the Town of Brookhaven on its west and the Town of East Hampton on the east. To the north are the Great and Little Peconic Bays and the Town of Riverhead. To the south are the great bays of Moriches, Shinnecock, and Mecox, the barrier beach island and the Atlantic Ocean.

Southampton is home to nearly 55,210 persons on a year-round basis. The summer population can swell to twice that number or more. The Town of Southampton is considered a popular seasonal resort area drawing thousands of visitors and seasonal residents. Tourism and the vacation home industry drive the economic development engine of the town.

Southampton’s communities of Remsenburg, Speonk, Hampton Bays, Westhampton, Quiogue, Flanders, Riverside, Northampton, East Quogue, and part of Eastport lie on the west side of the Shinnecock Canal. The communities of North Sea, Bridgehampton, Water Mill, Sagaponack, Noyac, Sag Harbor, Shinnecock Hills, Tuckahoe, and the unincorporated area of Southampton lie on the east side of the Shinnecock Canal.

The Shinnecock Nation is a self-governing, State-recognized Tribe. This special population of 375 persons is located in Shinnecock Hills. The reservation covers 750 acres of land.

(The information in this section, “About Southampton,” was provided by the town’s Web site at http://www.town.southampton.ny.us/.) P