Superintendent of Highways Chris Foley and the Town of Castile 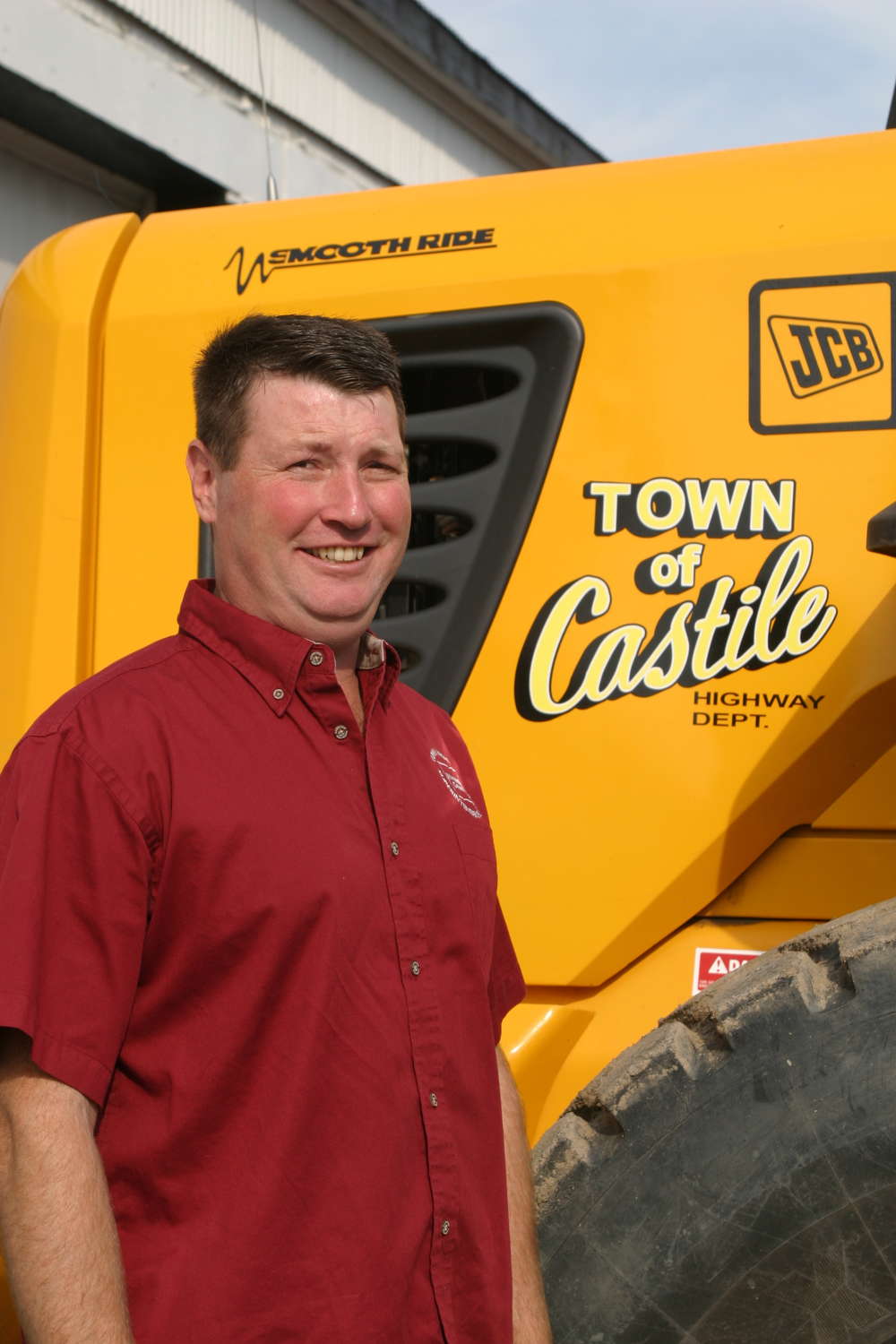 If the name of the town makes you think of the town of the same name in Spain (in Spanish it’s pronounced Kas-TEEL), you’re on the right track. Founding pioneers included Sally Hurd, who in the early 1800s is credited with having named the town Castile (pronounced Kas-TILE) due to her fondness for things Spanish.

“I never really thought about it,” said Chris Foley about the name of the town. Chris has been the appointed highway superintendent in charge of town roads for the past six years. He has lived “all around the lake all his life.” The lake being Silver Lake.

Before becoming superintendent, Chris had worked 14 years as an equipment operator with the Wyoming Highway Department.

Chris lives with his wife, Mary, and five children — Dustin, Blake, Alex, Nolan and Collin — in Gainesville, a few miles outside of town. He grew up in Coleville and went to high school in Attica. His parents had a cottage on the lake.

Chris works a part-time second job because he has a big family, and he is living in upstate during a tough economy in a money-strapped profession caught up in a national crisis.

While the highway buildings look a little old, the equipment inside, which is what matters most, is up to date and well maintained.

The Town of Castile is responsible for 40 center lane miles of its own, and almost 25 miles are maintained for Wyoming County in winter. 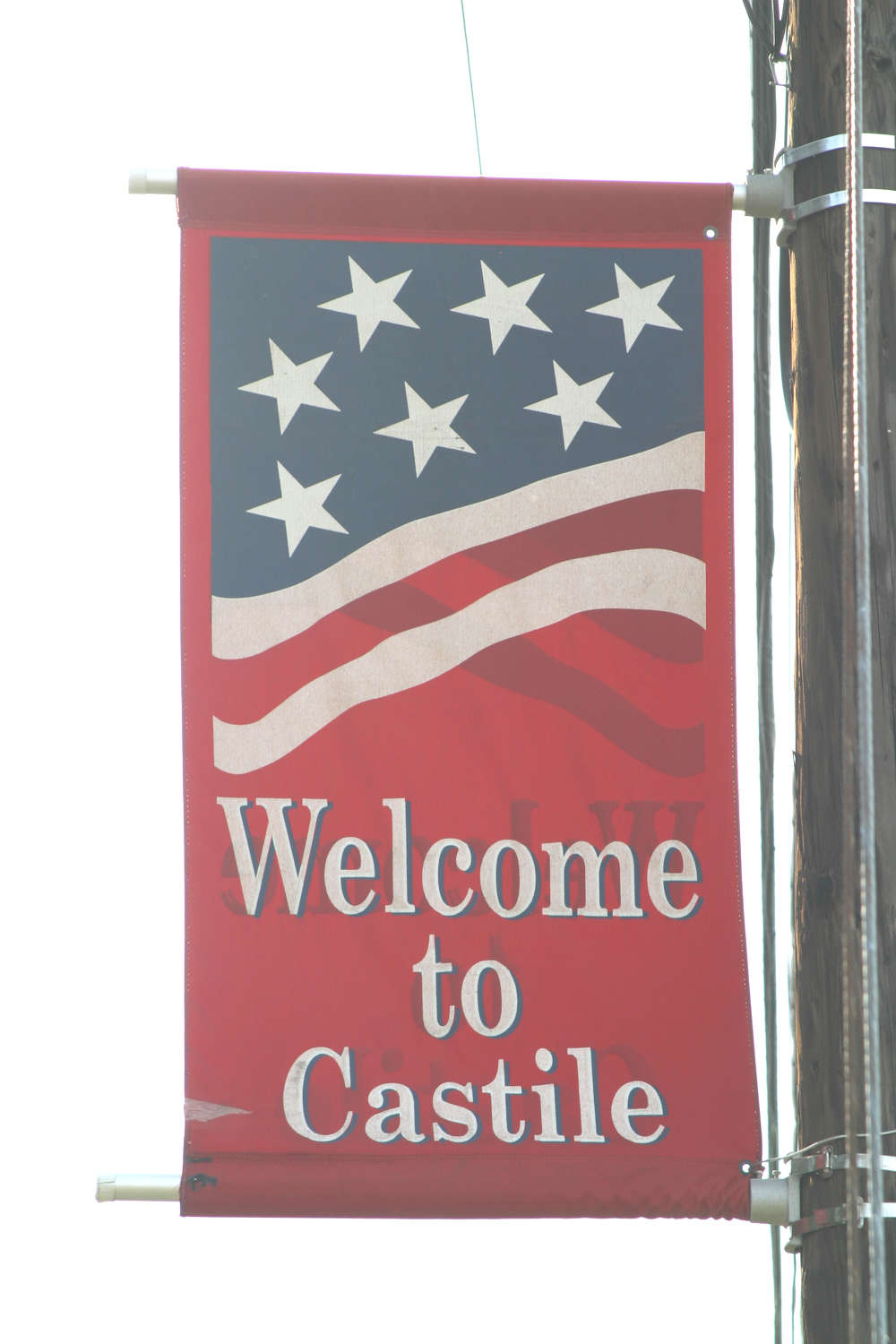 “About 18 people applied for this job,” Chris explained. “It’s an appointed position and the town board wanted to fill from within. That didn’t happen.”

When asked if being an outsider at the top was difficult, Chris wouldn’t say. He was 33 years old at the time and still remains the youngest person on the team. Chris became the “new broom.”

“It took some getting used to,” he said, “that the buck was going to stop with me. I think for any new superintendent it’s going to take a couple years for things to work out. We’re getting a lot of work done now, compared to the old days. People notice that,” he said with the confidence that comes with proof in the way the roads and drainage issues are maintained.

“When I first started we had some flooding, and that’s when I learned where all the problems were. We’ve been working on them ever since.

“I’m in the shop most of the time, or out on the roads. We are doing things differently, that’s for sure,” said Chris, whose crew includes full timers Darryl Nourse, Jim Loomis and Cliff Scott. In summer an “older gentleman” helps with mowing. 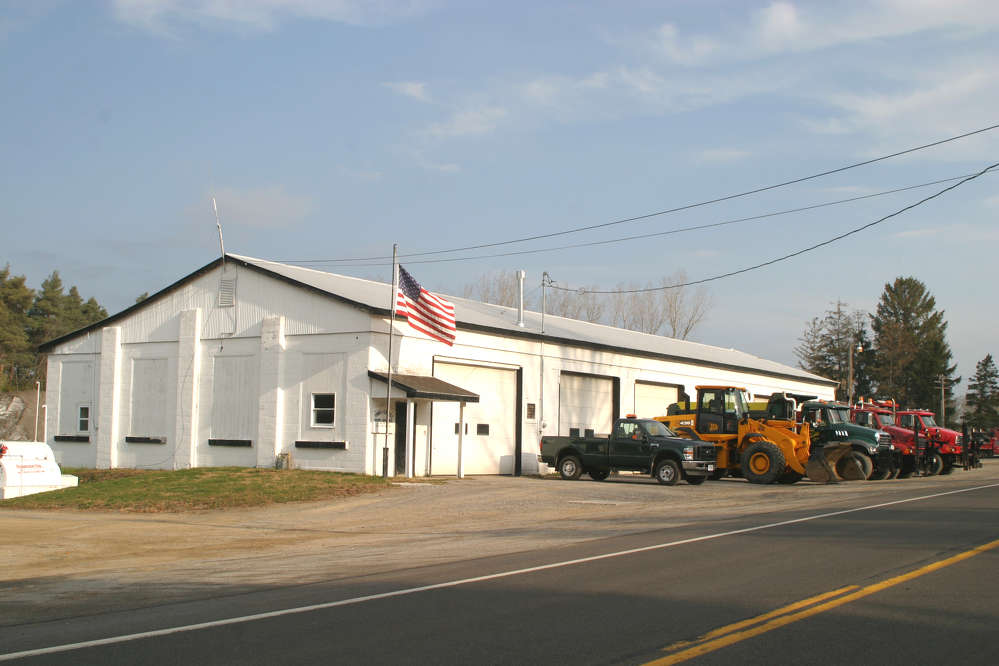 He would like to hire a fourth employee, but budgets are tight.

“It’s hard to work with only three because if somebody is out, you can’t get as much done. Another person here would be a godsend.”

He also would like to see the outdoor salt pile under some kind of protective structure.

Chewing Up the Roads

It isn’t just the 18-wheelers avoiding Thruway tolls that lumber through the town. Castile is bound on one side by the magnificence of Letchworth Gorge (called the “Grand Canyon of the East”). Letchworth Park is the jewel in the state’s park system with three distinct waterfalls, a gorge and views at every lookout. Letchworth draws thousands of visitors year-round. Much of the park is located within the town of Castile, although its roads are maintained by the park staff.

Castile also is home to some of the largest dairy farms in New York State. In fact, Wyoming County leads the state in dairy production. Caring for herds requires lots of heavy equipment to haul the milk to market every day, provide feed and water, and remove waste. In addition, fields are planted and harvested with big equipment, creating feed for the livestock.

“The biggest employer in town is the farms,” Chris said. He estimated five farms are milking more than 1,000 head of cows, and several more farms have half that size herd. He added, “That makes our roads a little different. This is not a densely populated area. Outside of trucks coming through, our roads are mostly used by the dairy farms and for a few cash crops.

“You don’t see new homes going up around here because the land is so expensive; farmers just eat it up. They need it. There’s no land to build on.

“We’re always working with the farmers. I think they try not to do damage,” he said. “The equipment is so heavy that it beats down the roads.”

Chris said farmers also like to plow right up to the edge of the road, fighting for every inch, which causes more erosion.

Silver Lake and the Watershed

Castile sits in a major watershed, with Silver Lake dead center. Drainage issues occur all around the lake, and the repetitive hammering from heavy farm equipment doesn’t help road surfaces one bit.

Silver Lake, three and a half miles long, is one good reason why Castile developed where it did. The other is a sanitarium (now used as a residence) that once received patients from around the world because of its reputation for healing using “water cures” and traditional medicine.

Strangely, the inlet and outlet to the lake are very close to one another. A plan to dredge the area, to help rid the lake of weeds, has hit resistance. The settlement of the Silver Lake Association (180 homes, half of which are summer people) is an unusual, somewhat restricted community in a sort of protected paradise of private ownership.

On the shore of Silver Lake is the Silver Lake Institute, a once-gated community in a turn-of-the-century utopia, similar to another lake-based religious camp — the Chautauqua Institute, but on a more modest scale. Silver Lake has a removed population center all its own with several textbook examples of Victorian cottages. The town is known for the Eastlake School style of cottage — a kind of Victorian/Arts and Crafts hybrid. At least one community building has landmark status.

Think of the Silver Lake Association as a reservation unto itself. Although nearly all of the roads and driveways for residents and their guests are cared for by the association, there is one town road that Chris is responsible for that runs right through the community.

“We got different sorts of situations,” he said of the town roads.

“More cottages mean more people. People with lake properties don’t want drainage in their yards. Sometimes they have two or three outlets in one yard. Most of the pipe and culverts were installed in the 1980s during a growth spurt. All of it is bad. In some cases pipes have been cut through during renovations. I just know that if we don’t get to fixing them now, there are going to be some real problems,” Chris said.

It is often during Chris’s daily routine of driving for 50 minutes down both sides of the lake and through the main part of Castile where he finds inspiration for the work schedule priorities.

“It’s weird, but we have two to three different kinds of conditions from wet stuff, snow and ice, and it accumulates in different areas all around the lake.”

This spring he noticed an older home up for sale. As soon as the building was demolished, Chris was not surprised to see that a drainage issue was getting worse due to the excavation. So, even before the new owner began serious construction work, Chris and crew began ditching, digging, piping and screening the outlet near what was to become a high-end driveway. They used lots of rocks to prevent erosion.

Chris’s crew was done with the drainage upgrade in a couple of days before the new owner began preparing his new building site.

“The lake is kind of a headache,” he said. “A lot of people can’t afford to live there anymore so you get new people with some money who don’t understand why the roads are the way they are.” In Silver Lake, as elsewhere, budgets drive everything.

Where Does the Water Go?

Dealing with drainage issues in town is what Chris does most these days. He is genuinely enthusiastic about the improvements his crew has made, in part, because better draining is immediately evident to everybody, town board and residents alike.

“We’ve come to be responsible for about 500 to 700 feet of new drainage systems each year,” said Chris. If Castile were a bathtub, Silver Lake would be in the vicinity of the plug, and Wolf Creek would be the spigot.

“We do more depth drainage work than they ever did before. Part of it is having much better small and more powerful equipment. We’ve been updating all of the equipment since I got here six years ago.”

Chris said catch basins, pipes of the correct diameter and special wire mesh cages to hold rocks in place in certain situations all give him and his crew a feeling of accomplishment, when done right. It takes a total understanding of the landscape to help direct water with the right pipes, set at the correct angle, in a properly prepared ditch, and heading in the right direction, to drain effectively.

Caring for the Roads

This year for the first time, Chris secured sufficient funding to do some in-place recycling. He said, “With in-place recycling you have to have the right amount of black top there, but it’s a lot more effective than a hot mix.”

Chris has a wait-and-see kind of attitude.

“It seems to be working real nice,” he said. “We’ll know for sure in the spring.”

For other roads it’s a treatment with graders that counts, followed by the paver.

“On several roads we’ll do the grinding and grading and come back the following year to seal them.”

They also try to widen all roads.

“We’re pushing for 24 to 26-foot-wide roads,” because as Chris said, “The 18 to 20-foot trailers coming through take their toll on the roads.

“We’ve all kinds of situations here, and a lot of our roads are in pretty rough shape,” Chris said.

Last year the town used 30 tons of coal pitch to improve the roads. This year Chris said the price of patch is “out of control” because of the price of oil.

Chris, who has his Class D water license (earned from the Town of Tonawanda training), said that drainage is key to good roads. His town has some shale and gravel, which drains well. “As long as your drainage is good, you got it made,” he said.

It’s inevitable that in towns this small there would be some sharing. For Castile, the town it shares with is Perry. Chris explained, “The Perry entrance to Letchworth State Park is in Castile, and the Castile entrance is in the town of Perry.” Go figure. Furthermore, Castile’s water comes from the village of Perry while Castile’s sewage is pumped back, causing Chris to joke, “Perry gets us coming and going.”

The highway crews also share a roller and labor when needed, especially when trucking materials.

“I may not be overly mechanical,” Chris said, “but I do enjoy doing the drainage work a lot. Being outdoors and working as a team is great. We are getting a lot of quality work done now. Our finished work is real nice.”

Chris’s second job, a part-time position in property maintenance management, helps him anticipate the needs of his kids — all five of them under the age of 16. He credits his wife, Mary, with being the family “rock.”

“She’s real good with the kids,” he said. “That makes a big difference. There is never a dull moment.” He said his family loves visiting the highway garage and, because the kids are young, they are especially impressed that their dad gets to drive large pieces of equipment.