Highway Superintendent Steve Lollman Sr. and the Town of Marshall 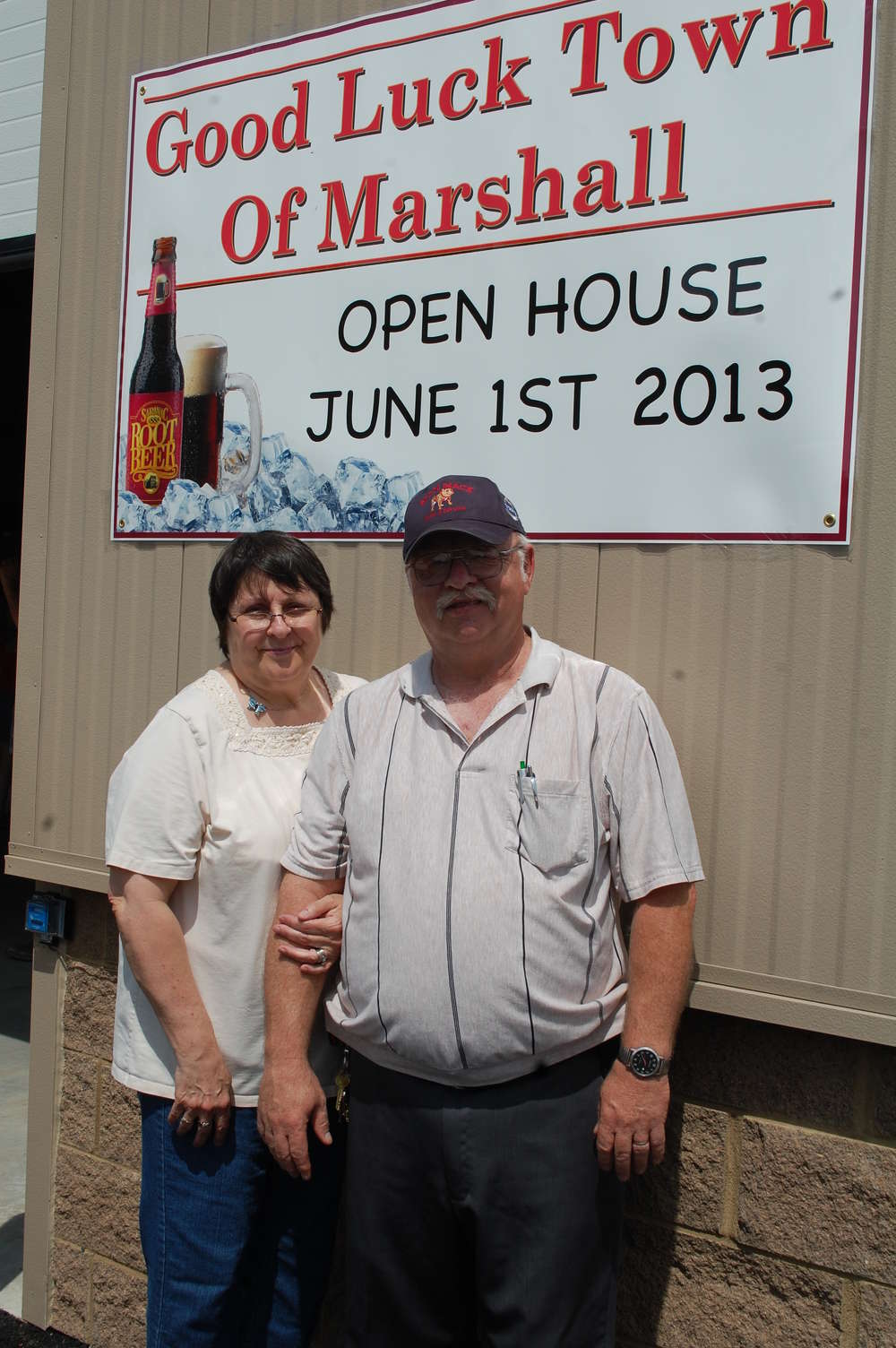 “Ever since I was a little kid I wanted to grow up and drive trucks,” he said.

And that’s exactly what he did as the owner/operator of K & S Trucking LLC. Unfortunately, a few years ago the opportunities for hauling aggregate and blacktop for the local quarries dried up, although he still owns a couple of Mack dump trucks that he hires out for local hauling of aggregate and blacktop.

Steve’s experience with trucks wasn’t limited to K & S trucking, however — he also worked for a period of time hauling milk in a large tanker truck.

Steve gained experience working for highway departments in the early 1980s when he served for a period of time as the deputy superintendent of the town of Madison.

He returned to working for highway departments in 2008 when he became the highway superintendent of the town of Marshall. The position became available when the former Highway Superintendent, Brad Davies, who had been in office for eight years, passed away. Steve is now in his third two-year term and is facing an election in November. He is running against Bob Welch, the town’s deputy superintendent.

Steve’s years in office have been anything but routine — the town has been hit by hurricanes, floods and the total loss of the town’s garage in a fire.

“Our most recent challenge was this summer’s flood. All summer long we had daily rain events and the ground was completely saturated. On June 28th and 29th we received five inches of rain. We started to get phone calls around 4 a.m. that the creeks were rising. As our infrastructure started to break down [culverts washing out, ditches overflowing] we had to start closing local roads. We closed Canning Factory Road, Earl Manor Road and West Hill Road. Our two most significant creeks, Oriskany Creek and Big Creek, literally turned into raging rivers. The erosion was so dramatic that the paths of these creeks in some cases changed by a couple of hundred feet, destroying anything in their paths.

“On January 2, 2011, we faced our biggest challenge. I was entering a funeral home in Waterville, N.Y., to pay final respects to an acquaintance when the scanner went off. Initially the scanner indicated that it was the highway barn for the town of Augusta, but it corrected to indicate that it was the town of Marshall highway barn. When I arrived, our entire garage was engulfed in flames. They were literally unable to get anything out of the garage. It was a total loss. It was the beginning of January, the heart of our snow removal season, and all of our trucks and plows were gone. “ 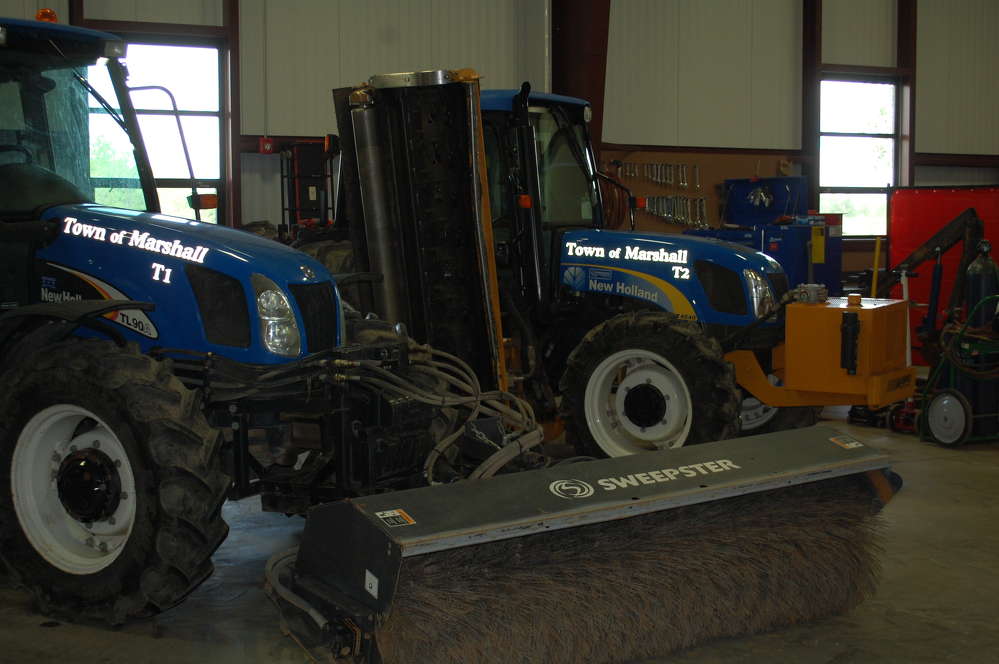 Oneida County also made a truck available for the town.

“Someone was looking out for us. From the day of the fire we had great weather with no snow for several weeks, which certainly gave us some time to get organized,” Steve said.

“The insurance company secured the entire fire site, so even if there was anything that could be salvaged from the fire, we were not allowed to do so. We did have a second building measuring 50 feet by 100 feet on our property that was used for cold storage. It typically held some of our older equipment or equipment that being stored in a heated garage would not benefit. Items like our motorgrader, compaction equipment and those types of things.”

The highway department now needed to concentrate on permanently replacing its equipment fleet. Over the course of that winter it picked up a John Deere 644 loader and also placed orders for two new trucks, which were delivered in the fall of the following year. A third truck was ordered and delivered a little over a year later. The highway department purchased two new New Holland tractors for mowing and its final purchase, a new chipper, was just delivered in August.

Once the crisis management period was over and spring arrived the town of Marshall started the planning process for its new garage. Architects came up with a design that included a 64- by 150-ft. garage area and a 60- by 30-ft. office space area.

The layout of the new building is exactly the same as the old one with the exception of being a little wider and, of course, a lot of design changes had to be made to bring the facility up to code, like adding a sprinkler system and a waste water collection system. Radiant floor heating was included, which helps the trucks dry off much better and the heat distributes more evenly.

“It used to be that the temperature ten feet off the floor was fifteen degrees warmer than the floor area during the winter months. That’s not the case anymore. The new break area for the employees is much nicer than the old one. The lighting system in the garage is much brighter than the old one and leaves very little shadowing to deal with.”

On June 1, 2013, the town held an open house to give the community an opportunity to see the new facility and, just as important to Steve, representatives of the neighboring highway departments were all invited as a show of appreciation for the support they gave during the town’s crisis.

A part of any highway superintendent’s job is working with disgruntled local residents.

“All you can do is address people’s problems as they arise. When they call I try to go see them in person, talk to them face to face, and see if there is a solution. The most challenging part is trying to balance the needs of the resident with the needs of the town board and its employees.”

Steve’s least favorite part of the job is dealing with labor issues.

“We have had some union issues here and it creates a tremendous tension in our workplace. Also, dealing with issues between the employees and the town board, things that I have very little control over, is also very challenging. Also, knowing at times there are roads out there that need fixing and not having the dollars available to immediately fix them.”

A complete history of the town of Marshall can be found at www.marshallhistsoc.org.