Highway Superintendent David Dopp and the Town of Perth 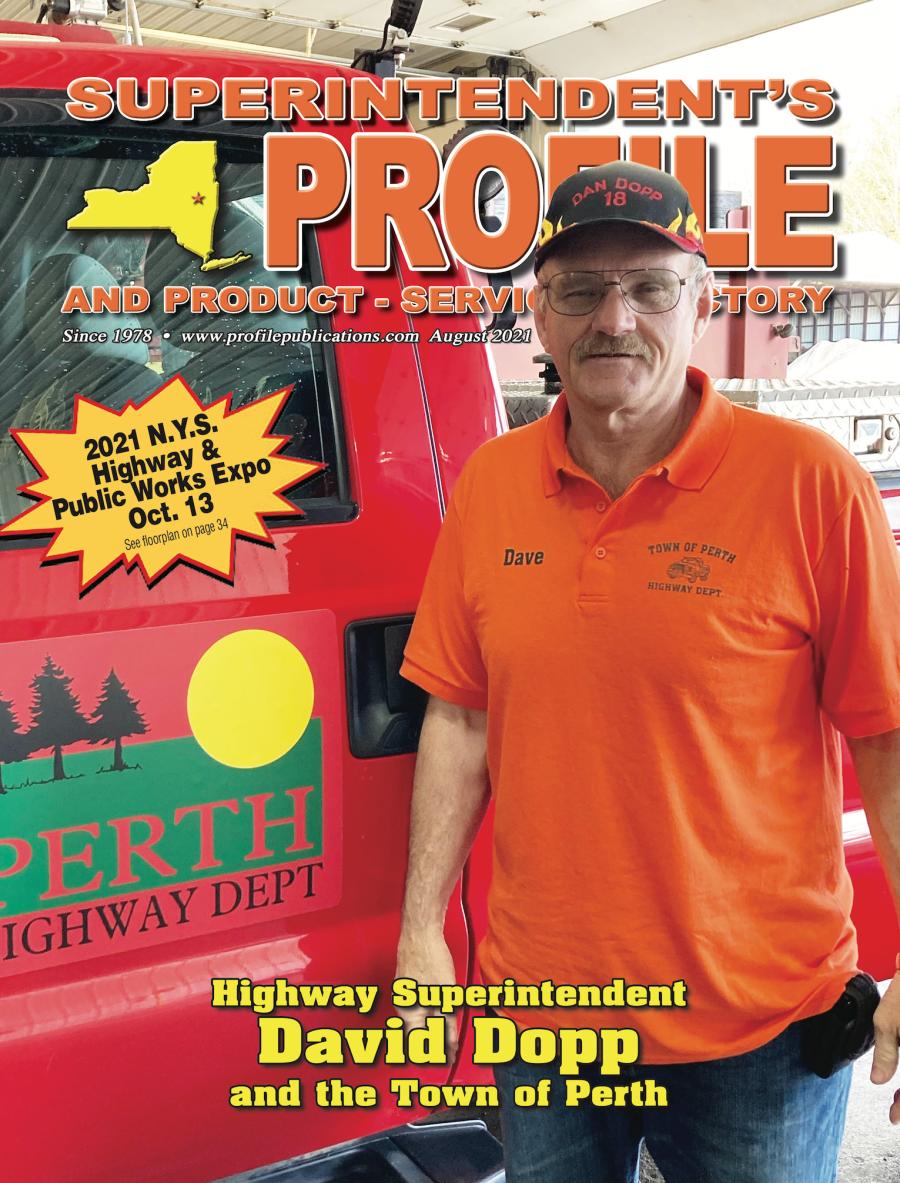 Lifelong Perth resident David Dopp is the town's longest-serving highway superintendent, clocking in at 26 years and counting — counting, because he intends to run for office again in November, an election he anticipates winning, as he is expected to run unopposed.

Winning Over the Town

It doesn't hurt that since his first day in office, he's maintained a good working relationship with the Fulton County highway department, Perth Volunteer Fire Company, Perth town board and the town of Broadalbin highway department.

"When the county ‘does their gravel down' for shoulders, we work with them," he said. 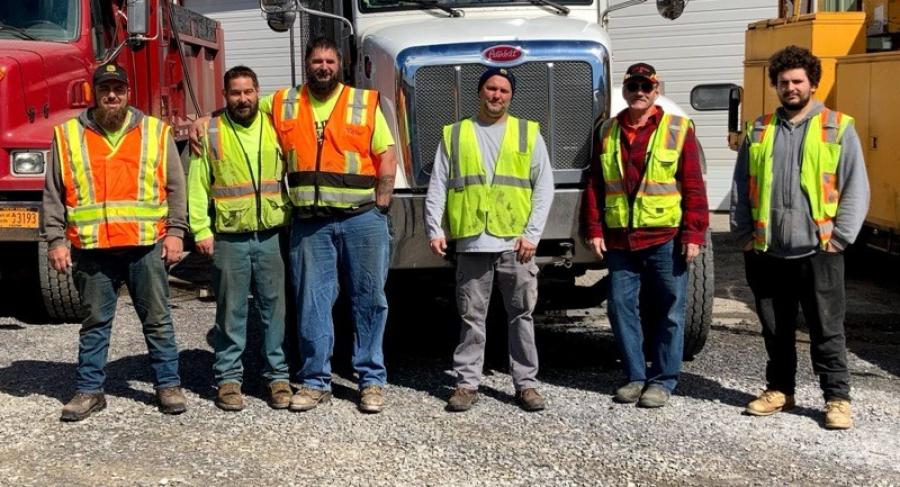 The county uses a shoulder machine that the town dumps gravel into so it can be spread out. His highway department also has hauled the ground-up millings from a county road that the county was grinding up and stockpiled it at the garage.

To save the town money, the highway department did all the groundwork — digging the foundation and backfilling with gravel to create a natural drain — for the Perth Community Senior Center.

Similarly, they did the groundwork and inside painting for the department's new garage. "We built up the site, poured concrete and installed a septic system," David said.

Over the years, the highway department has torn down the original highway garage and helped tear down the old fire garage. Under David's leadership, they've done a lot of work for the Perth Volunteer Fire Company, such as installing six dry hydrants throughout the town. A dry hydrant is a regular hydrant that requires a sucker pump on a fire truck to pump water into the truck to fill it up.

Whenever it snows, David plows the fire department's parking lot, and if there's a winter fire, he'll salt and sand the road in the area so the water doesn't freeze and make the road dangerous. "It keeps the area safe for travel," he said.

"My husband is very dedicated to the town of Perth," said his wife of 42 years, Rebecca. "He has always been very concerned about the safety of the town roads, especially in the winter. I have personally seen him go outside in the middle of the night — on the road to see if it's slippery — to make sure the roads are safe for school buses." 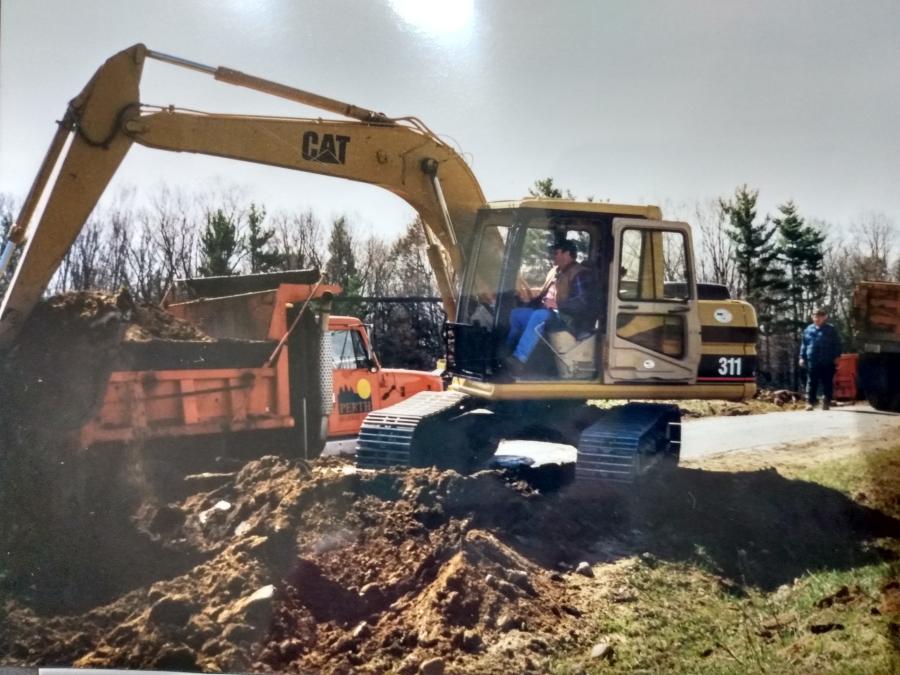 Safety is this superintendent's top priority.

"I'm always concerned about the children's safety on school buses and people going to work," he said. He takes a lot of satisfaction when residents comment on winter road safety.

To help drivers by improving visibility at the intersection of Noonan and Opalka roads, he "took a dangerous hill down" during his first term in office, in 1997.

Less dramatic safety measures he more commonly takes center largely on road paving. During his tenure, every road in Perth has been paved twice and every crossover road culvert has been replaced. Do the math: he's been in office 26 years and the lifespan of a road is 10 years. "It's a revolving circle." A cross-over road culvert lasts a bit longer — approximately 50-75 years — which is why he hasn't had to do them a second time.

They are responsible for 36 lane miles. Together, they plow all that plus an additional 3 miles for the county. Divided into five routes for snow removal, each of which takes approximately two hours to complete, 33 miles of the roads they clear are paved.

The department is currently paving 6 miles of Opalka, Noonan, Voorhees and Morrow roads. Unfortunately, paving led to David's worst day in 26 years. "I had to flag." The crew members who usually flagged were busy collecting trash because it was garbage day, so the boss stepped in. He may regret that decision now. "I was spit on, swore at, almost got in a fight and had nasty messages on my machine."

In addition to the roads, David and his crew maintain five bridges: Mosher, Calderwood, Midline, Morrow and Stairs. The Stairs Road bridge needs paving and replacing. "Last year, the shoulder side of it was caving in," he said. They poured concrete to hold it up temporarily, but they plan on doing a more permanent fix.

This project is still in the planning stage. Fulton County Water and Soil is taking the lead by overseeing the project. "They will help take the old bridge away and replace the old bridge with galvanized pipe to turn it into a cross-over road culvert," David said,

However, their current budget of $6,000 isn't enough for the project. He estimated that it will take $40,000-$50,000 to do, but he seems confident that they'll find that money to make the bridge safe once again. "If things go according to plan, it will be completed by this fall."

Back in 1996, David said he "felt it was time to run" for the superintendent's office. His background prepared him for the role. 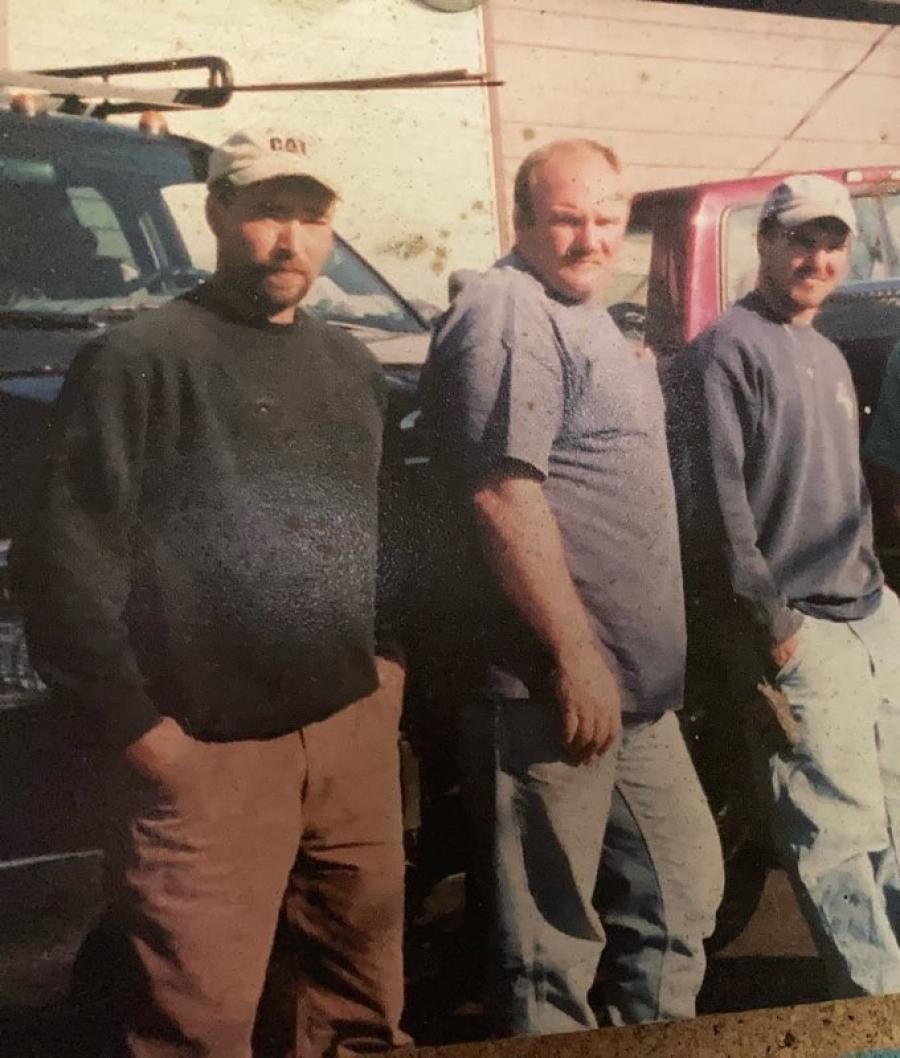 After graduating from high school, where he was tri-captain of the football team, he attended Perth Central School and the Board of Cooperative Education Services (now Vocational Technical Education Center) trade school, where he learned about conservation.

He then worked for local contractors before starting his own business in 1985. As owner of D.D. Contractor, David was a builder and handyman who moved into "just concrete work," pouring house foundations, slabs, sidewalk forms and retaining walls.

He kept the business going after he became superintendent, with his son and nephew in charge. But, after his son passed away in 2005, it was too hard for his nephew to continue, so David decided to close his company in 2011. He simply didn't want to run it without his son.

Fortunately, the knowledge of conservation and construction he had gained through his studies and his jobs was helpful once he became superintendent. Not only was that training an asset when building the new town barn, but knowing how to run the equipment and how to shoot grades (a simple process of testing the elevation of a construction project in order to level or slope it for laying pipe, setting footers, pouring foundations and doing excavation) has been a benefit on the job.

Being very knowledgeable about equipment enables him to maintain the highway department's fleet, which includes:

He hopes to get two more tandem dump/plow trucks. Meanwhile, his crew does basic maintenance on the equipment they have: oil changes, alternators, tires and other things they're qualified to do, David said. "Major repairs go to the local garage: Frank's Heavy Duty Truck Repair."

Regardless of the pitfalls — or spit falls — of the job, David likes what he does most of the time. "I love my job! I enjoy getting up every morning to go to work."

With an operating budget of $799,049 ($146,193.91 of which is his CHIPS allocation), David has managed not only to pave the roads, but to stripe them as well. It's one thing his constituents like. "People are very pleased with the lines; it helps on foggy, rainy nights." 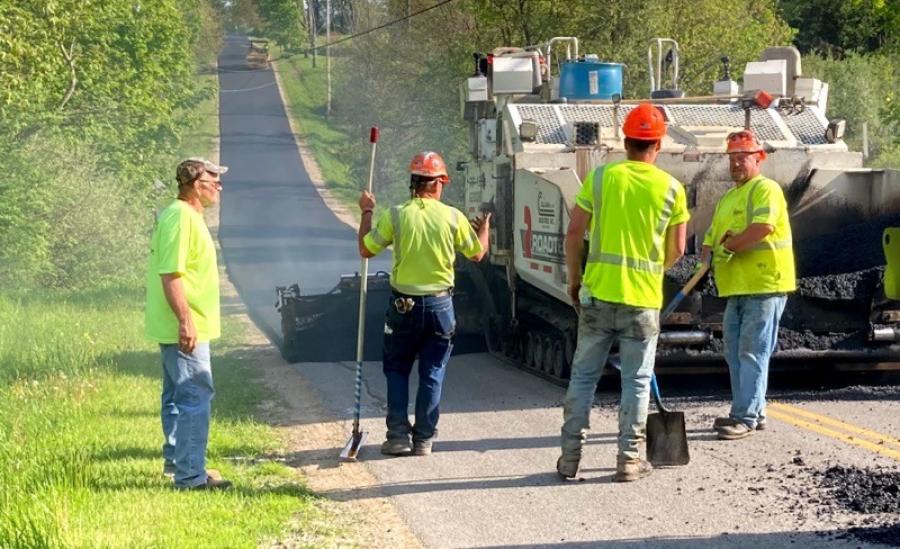 A member of the Fulton County Highway Association, David is challenged with communication. He and the crew are able to converse via Motorola CB radios in all equipment, the office and the garage, and he meets with the town board monthly to keep them apprised of the highway department's plans and accomplishments. But when it comes to conveying important information to the residents, he's relegated to calling them on the phone or knocking on doors because the town board can't justify the expense of computers for his office, he said.

It's that extra effort that has made him so successful. "I always try to do the best I can," he said modestly. But going door-to-door may become even more of a challenge as the town grows. There have been seven new housing developments built since he took office.

First settled in 1772 by pioneers from the Scottish Highlands, who named the town after Perthshire, Scotland, the town of Perth was formed from part of the town of Amsterdam in 1838, the same year Fulton County was created. Four years later, Perth acquired land from Broadalbin and Mayfield, increasing its size. Nevertheless, it remains a small town in east central New York at 26.1 sq. mi. and with a population of around 3,500.

Located in New York's Mohawk Valley region, Fulton County itself is named in honor of Robert Fulton, developer of the first commercially successful steamboat. The land consists of gently rolling hills once covered in virgin pine. Limestone and slate emerge from soil consisting of a clay loam.

With more than half of the county lying within the scenic Adirondack Park, it's no surprise that outdoor recreation is a key part of life in the area. Fulton County has 33 lakes, including the Great Sacandaga Lake, which measures 29 mi. long and 6 mi. wide. Boating, fishing, hiking and snowmobiling are popular activities. The 10-mi. FJ&G Rail Trail offers opportunities for off-road multi-use recreational use.

As rich as the area is in natural attractions, the community is very cognizant of its history and culture, which are presented in historic sites and markers, art galleries and community theatre. In the post-Revolutionary era, the county became known for manufacturing gloves, with two other towns (Johnstown — the county seat — and Gloversville) gaining notoriety as the world's glove and leather capitol. While it was the region's primary industry for 200 years, initiating the largest rise in population, there are few tanners and glovers there today.

Healy Kill, the area's longest waterway, running from Perthshire at Perth Center to the Chucktenunda in West Galway, supported many businesses in the early days of water power, such as Harrower Sawmill, founded in 1845 by Walter Harrower.

One hundred years later, another kind of business was launched when Veron "Butch" Robertshaw settled in Perth after a long career as a drummer to start a bar known as Butch's Drum. He introduced the catchy saying, "It's heaven on earth to live in Perth," which is still spoken by residents today.

The Quieter Side of Life

Amidst this idyllic setting, David grew up with two brothers and three sisters. A few years out of high school, David got married and started a family in the same town where he grew up. 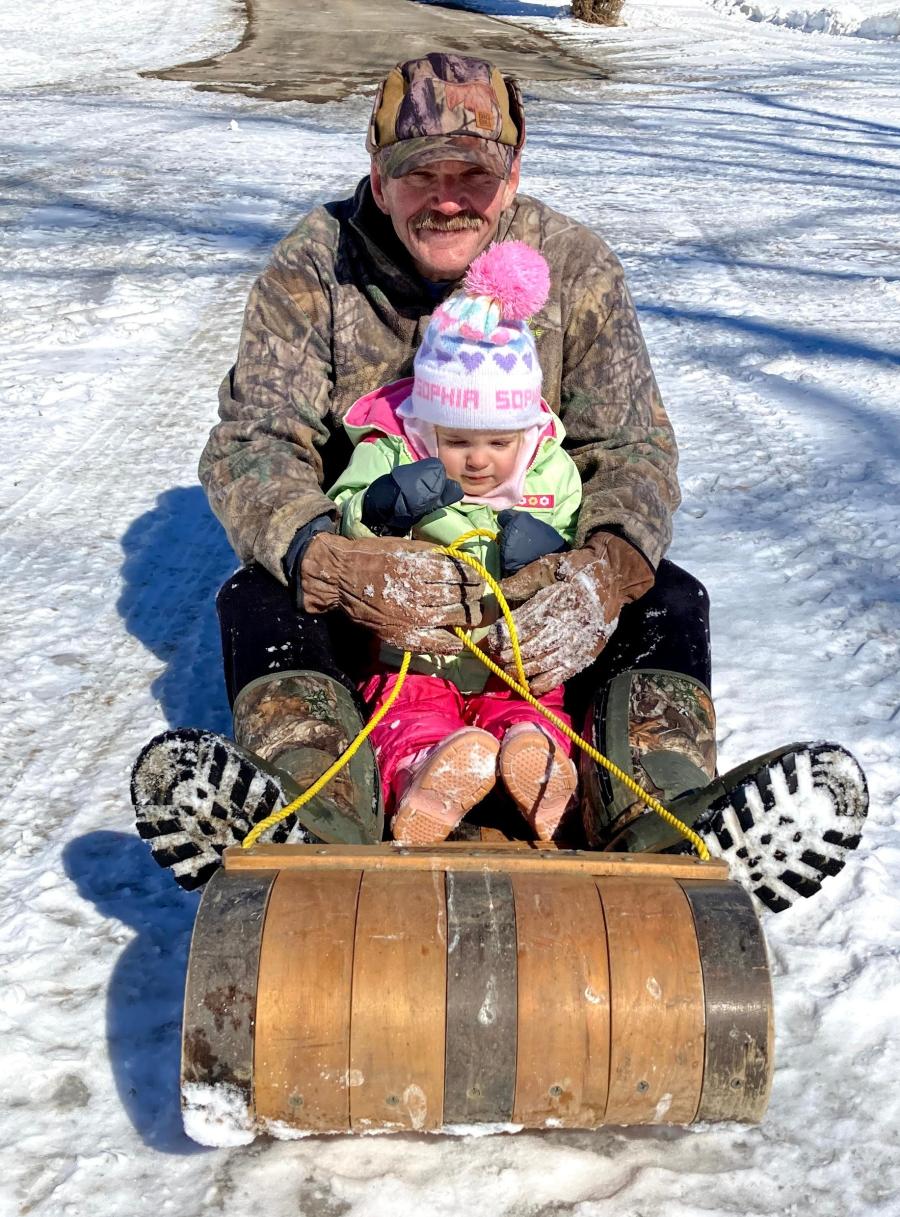 Sadly, his son, Daniel John, died in 2005 in a one-car accident, but daughter Kathleen Chestnut, 35, is director of the pharmacy at St. Mary's Hospital and mom to 2-1/2-year-old Sophia, also known as Grandpa's pride and joy.

When David isn't making sure the town's roads are safe for its residents, he can often be found mowing his 20-acre property or sitting by the pond he and a crew, including his late son, dug. The one-acre pond is 10 ft. deep, and because it's fed by three natural springs, had to be dug in one weekend. David also enjoys playing with his granddaughter and his dog, Dozer. His four-year term ends in 2021, but he's running for another. For a guy who said his first day in office was his best "because I knew what I wanted to accomplish," there still seems to be a lot of good days and goals ahead in a career that appears to be far from over. For the foreseeable future, he plans to "continue to do what I'm doing: provide good, paved roads for the people of Perth." P