Highway Superintendent George Dimler and the Town of Marbletown 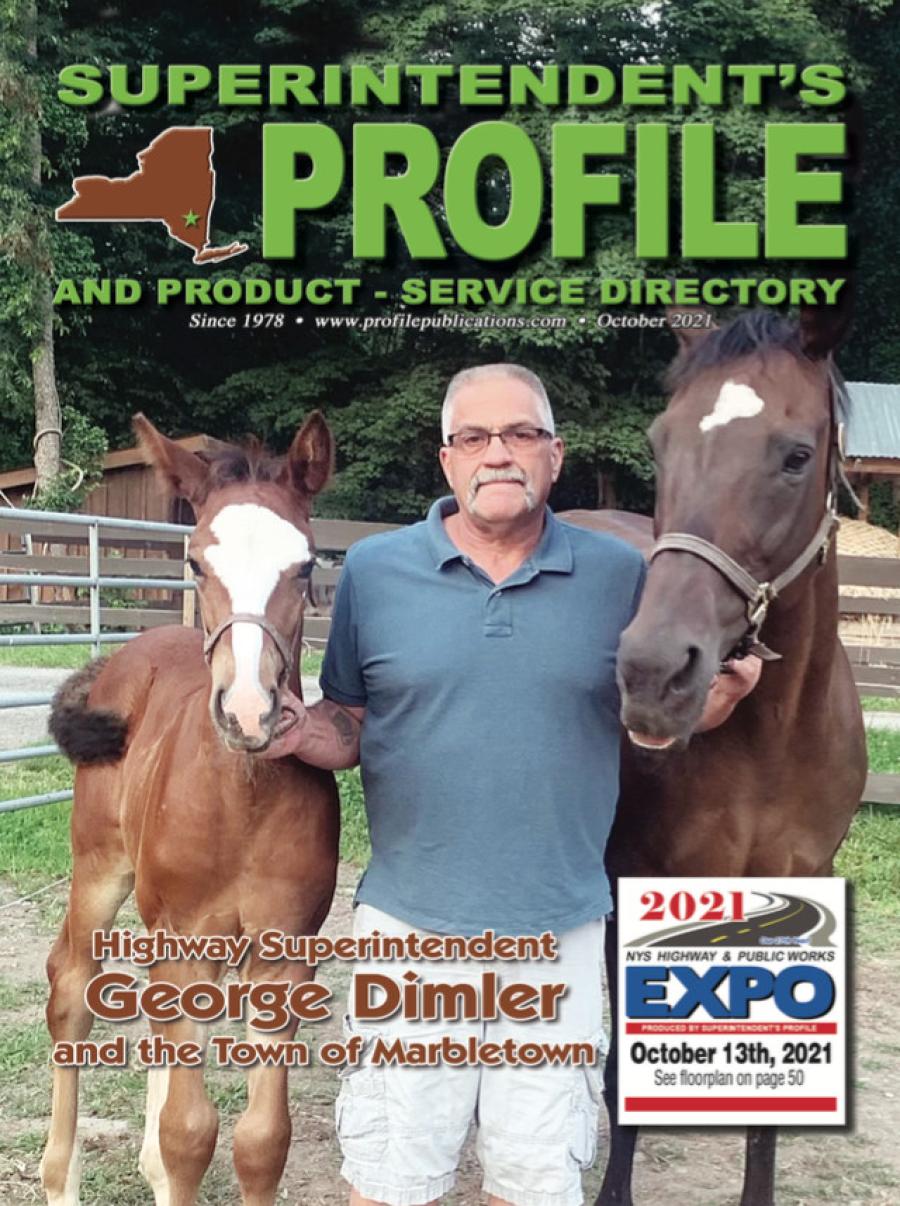 From saving lives as a fire fighter for 42 years to rescuing animals to redeeming the town of Marbletown's roads and highway equipment, George Dimler has spent his life preserving whatever he's around.

As Marbletowns's superintendent of highways since 2014, George has focused on fixing the equipment and roads that were in major disrepair when he took over.

"When I took office, there was a big complaint about the equipment," he said.

The trucks had bald tires; their lights and heat didn't work. "I have improved the trucks and equipment. There was not a good maintenance program in place," he said.

George changed all that. He went to the board about the situation and he started triage on the equipment, much the way he previously performed triage on fire victims.

"I found two or three good used trucks from Vermont. One town rotates its fleet, so I was able to get these to get us through."

"With new equipment," he said, "we have lower maintenance costs — especially with the new trucks under warranty. We can put that money into other things."

He also launched a preventive maintenance program, with computerized records that track oil changes, lubrication, brakes and all work performed.

"We do most everything in-house with maintenance and repair." That includes cleaning and repainting the truck frames after every winter.

He purchased a good used loader but admitted that his equipment inventory could use a little updating: a backhoe and a mini-excavator when the budget allows. He doesn't lease equipment. He prefers to rent or borrow anything they don't use regularly because he considers it more cost-effective.

One purchase was a hydraulic hose-making machine. "It saves time," George said.

Instead of having to wait on ordering hoses, the crew can make any size they need, whenever they need it — and get back to the job. Other items have to be kept in the inventory. George likes to keep filters and wear parts in stock so there's no lag time with ordering.

Undecided about running for re-election after his term expires in 2023, George is already expressing concern about whether a successor could keep the equipment going.

For 22 years, George was a career firefighter for the city of Kingston, N.Y. Just as he was thinking of retiring from the fire department, he was approached about running for highway superintendent. His experience managing people in the fire service, as well as his business acumen gained from owning an excavating business, are assets that benefit the department.

Over the eight years he's been with the highway department, George has fulfilled three two-year terms and is currently halfway through a four-year term. He ran unopposed in his past two elections. At the end of his current term, he will have completed 10 years with the department. It sounds like a good round number to end on, but he still has goals on his mind — like getting a new garage built.

The garage they currently work out of is a metal building in the middle of town that used to be the combined town hall and garage. Built in 1976 with a 25-year life expectancy, George said, "It has outlived its usefulness." Scott Davis at Peak Engineering did a study confirming that it needs to be replaced.

The town is hoping to build a new 100 x 200 building in 2022, but the estimated $5-6 million price tag means they'll have to issue bonds to pay for it. According to Wicks Law, George explained, any job done with municipal money must be done at the prevailing rate (union scale). "That makes the costs go higher." Cost aside, they are in the planning stages and have a site plan for new facility.

Ongoing work includes paving: either laying blacktop or re-sealing with a chip seal. After paving season comes plowing season. The highway department is responsible for clearing 86 center lane miles in the winter, four of which are gravel, and four bridges. The 10-plow routes take 3-1/2 hours each. With an average annual snowfall of nearly 45 inches, the crew has to do a lot of plowing. To keep roads clear, they store 2,500 to 3,000 tons of sand/salt mixture.

Replacing crosspipe culverts is another ongoing job. The older metal crosspipe culverts have reached the end of their life expectancy, much like the town's garage, and one is of inadequate size, so it needs to be replaced by a concrete box culvert and have the road raised. That one culvert alone will cost $700,000. With an annual budget of just $1,590,000 ($190,000 of which is CHIPS money), it's clear that they'll need some help paying for this project. George has applied for a Bridge NY grant. If the money comes through, this project will be let to bid because "it's too big of a job for us," he admitted, and requires permitting for streams.

An additional responsibility adding to the highway department's workload is mowing at the park, community center, four small town cemeteries and the town transfer station. They also have to maintain and mow along the sides of the town's rail trail system. The old O&W railroad tracks have been converted into a popular hiking trail.

As if all that isn't enough to keep a highway superintendent busy, George still volunteers as a firefighter and he owns a lawn maintenance and landscaping business largely managed by his foreman. He also is part-owner of an excavating business that works with residential building contractors on site clearing and prep, foundations, septic, driveways and finish grading. "Luckily," he said by way of explaining how he manages his time, "the superintendent is not required to be there all the time."

When they're paving, the crew gets help from other towns with hauling blacktop, as part of a county-wide shared service agreement.

Because cell phone service is spotty in their area, crews working out on the road rely on an 800 mega hertz radio system, mobiles in all the trucks and equipment, plus portables for flagging.

It was his deputy who was responsible for George's best day on the job. While Scott Hikade was out plowing, a yellow Lab jumped off a snowbank and got stuck in the snow under his plow. Fortunately, she was unhurt — but she appeared to have been abandoned.

Scott called his boss, who allowed her to ride in his truck with him while he finished his route. After checking for a microchip and knocking on doors to find her owner, it became clear that she had been left to fend for herself.

"We think someone dumped her," George said. "I ended up keeping her and named her Stormie. She is a family member."

Stormie joins three other dogs on the Dimler farm: a Jack Russell Terrier and two street dogs George and his wife, Cathy, rescued and adopted from Aruba. Also on their 12-acre farm are eight rescued mini donkeys, seven horses, a rescued pony, some goats, several chickens, a few barn cats and a goose. "I enjoy our animals," he said. "I enjoy spending time with my family and all our dogs."

Although the farm keeps him busy with fence repair and other chores, George likes to slip away to his second house near Tug Hill Plateau, an upland region in New York east of Lake Ontario renowned for heavy snows. "It gets 6 to 10 feet of lake-effect snow every year," he said. "I love snowmobiling, so I try to get up there as much as possible. They have several trail systems."

Unfortunately, his wife isn't as fond of winter as he is. The two met through a friend in 1981. They've been married 38 years and have two children: daughter, Brinn, 32, and son, Collin, 27, who gave them their first grandchild. When Cathy, who also is an animal lover, isn't helping with dog rescue and transport, she works at home.

George grew up in Stone Ridge, a hamlet within the town of Marbletown, in Ulster County, that features the Main Street Historic District, which is listed on the National Register of Historic Places. George Washington was rumored to have slept in one of the houses on Main Street.

History abounds in the area, first settled by white colonizers around 1638. The town of Marbletown was formed in 1788 and briefly became the state capital after the British burned the city of Kingston during the Revolutionary War.

As the hilly town with valleys and streams grew, it divided in 1823 when the town of Olive was formed, and again in 1844, when the town of Rosendale was formed. Marbletown still shares a town hall with Rosendale, located in a former elementary school. Today, Marbletown's population is approximately 5,600 and the town encompasses just under 55 square miles.

Situated on the eastern edge of the Catskills and the northern edge of the Shawangunk Mountains in the scenic Hudson Valley, Marbletown offers picturesque mountain views. Surrounding farmland helps the town retain its rural flavor, while four nationally registered historic districts pay tribute to its architectural heritage and its Revolutionary birthright.

Outdoor recreation is highlighted in the area. In addition to the O&W Rail Trail, residents avail themselves of the town park for organized sports, summer camp and casual fun on Esopus Creek beach. High Falls, another hamlet, offers the Five Locks Walk along the former Delaware and Hudson Canal.

When residents can tear themselves away from so much natural beauty, many of them get an education. According to George, Ulster County Community College was ranked the #1 community college in New York in 2020.

George pursues a different kind of education by attending highway school every year at Ithaca College. This three-day seminar is put on by the association of towns to provide information and training for its highway superintendents. Recently, it featured speakers on drainage, a presentation of a new asphalt product with polymers, lectures on equipment safety and flagging, and a legal panel for questions. The school also offers classes in safety.

Unsurprisingly, as a firefighter, George has a background in safety. "It's an important part of the job," he said. He is a New York State-certified safety trainer, with a Hazmat specialty.

That's why his worst day on the job was when an employee was injured on a job site. A severe leg injury prevented him from returning to work.

In an effort to prevent future incidents, George changed some safety procedures after the accident. He established SOPs for flaggers: no cell phones, no ear buds, always face traffic. He schedules flagger training, as well as wood chipper training and training on mowing and using the weed whacker. In addition, he said, the New York State DOT provides in-house training, such as one-man plowing classes and loader safety.

George is midway through his fourth term as Marbletown's highway superintendent. While he said he will never fully retire and "do nothing," it remains to be seen if he'll run for re-election in 2023. Instead of spending days cleaning up downed trees and powerlines after summer thunderstorms, he may be wishing to spend more time on his farm or at his Tug Hill home. He and Cathy also considered moving south, but with a new grandson in Connecticut, they're tempted to stay close by.

"George is a people person and enjoys working with the town residents," Cathy said.

He communicates important information with them on the town website, Facebook and social media, but said he still uses person-to-person contact. The proud wife believes that her husband is "great for this position," due to his multi-tasking skills and knowledge of roads and excavation.

For now, George, a member of the Ulster County Highway Superintendent Association, seems content with his job and focused on continuing to update equipment and improve roads and culverts. P