Highway Superintendent John Keleher and the Town of Potsdam 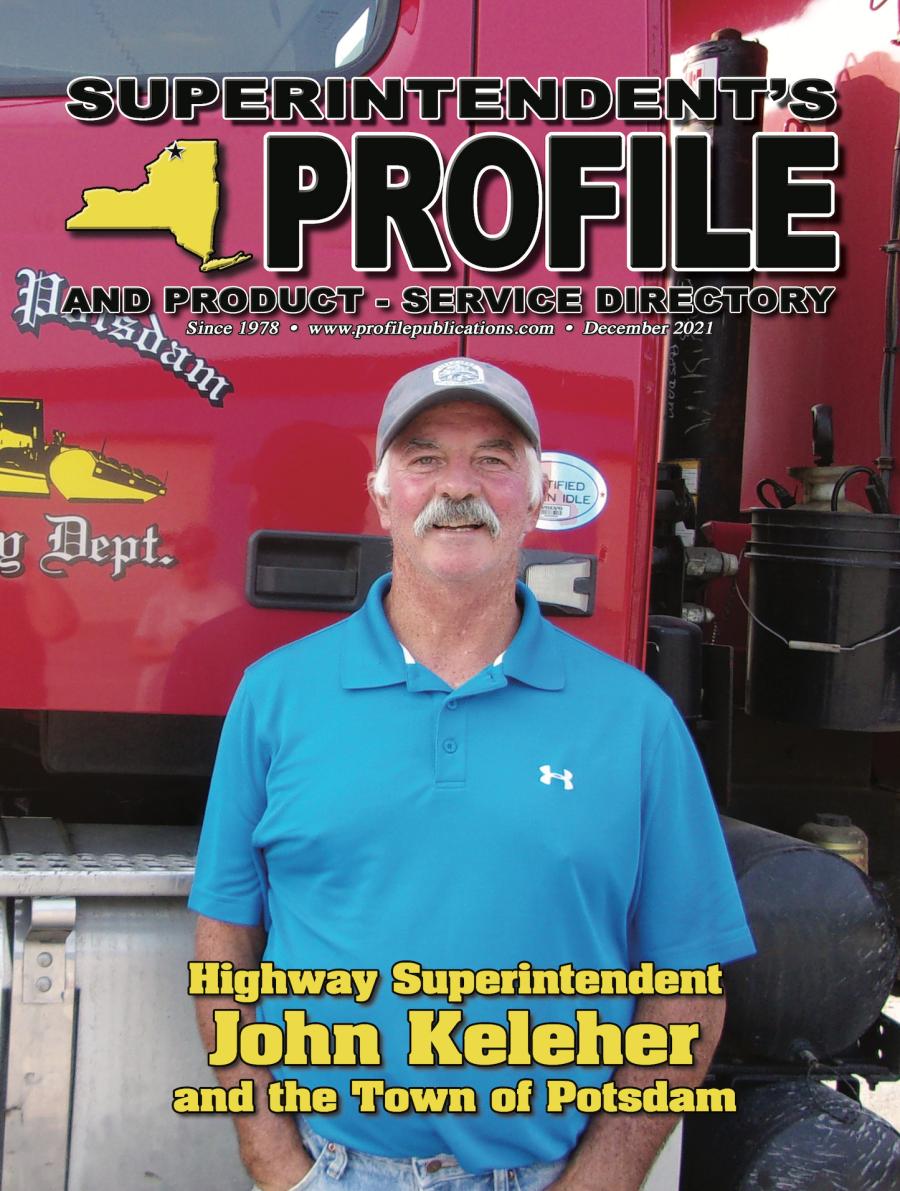 For town of Potsdam Highway Superintendent John Keleher a job well done is reward enough for his toil.

Whether it's keeping the streets safe in the winter, cleaning up after a storm or doing more with less money, those are the best days on the job for this super.

Born in this history-laden town, John has been a resident of Potsdam for 58 years. He grew up with three older brothers and two older sisters while attending Potsdam central schools. After that, he attended North Country Community College in Saranac Lake, where he studied business administration for two years. "Then I came back to SUNY Potsdam, where I studied industrial labor relations for three years," he said.

John worked every summer during college.

"In 1987, I was here for the summer. Highway superintendent Don Jones [who'd been there for 34 years] asked me if I wanted to come on full-time because three guys had retired that year. So, I stayed and I've been here ever since.

"I worked as a labor for one year. Once I was an MEO, I became interested in plowing the roads, working outside doing drainage work and being involved with the water and sewers. My biggest interest was staying with the outside working construction.

"I worked as an MEO from 1987 until I ran for the [superintendent] job in 1995. At that point, it used to be a joke between me and Don. When I first came here, I didn't think I wanted to become highway superintendent. He basically gave me every opportunity there was to learn everything about being superintendent. He'd give me different jobs, like doing the labor and the MBO. We had a small water and sewer plant and he'd send me down so I could learn how to do different things like that, including construction. When I become a superintendent, I found I learn something new every day."

John is married to Kelly, his best friend and wife of 30 years. She's owned her own florist shop for 15 years. The couple have four children. Cory, 29, is in Special Forces in the Air Force. Married to wife Megan, they have two children, Luke, who's four, and Jasmine, six months.

Sarah, 27, has her own childcare provider. Then there's Grace, 24, who works for Kelly, and Michael, 17, who graduated from high school this year.

"He'd like to come to work here. He's worked summers here for three years, but he really wants to do new construction," John said.

What does this super like to do in his spare time?

"I like to hunt, fish and play modified softball twice a week. I play outfield. I've been doing that since I've was 18. I played the younger group where they had the bunting and stealing. Now, I play the 35 and over group, which is what they call the old timers. It's fun. We play every Friday night. The season goes from May till August 1 then we have the playoffs."

He also loves to travel.

"We have a family-owned hunting camp in Hopkinton, which is roughly nine miles from where I live. Nowadays, we only travel occasionally. This year, we went to my son's house in San Antonio, Florida. We were on the Air Force base right on the Panhandle. We love it there."

John's retirement — whenever that may be — will close the curtain on nearly 40 years of service to the residents of Potsdam.

The highway department barn was built in 1950. The main garage is 40 ft. by 180 ft. and has eight bays. It includes a parts and lunch room and an office on one end.

As highway superintendent, it's John's job to maintain the town's 240 center lane miles of road, 17 of which are gravel and 105 are paved. That translates into seven plowing routes that take approximately 3½ hours to complete.

"Ours are pretty well spread out through the township. We're kind of unique because we actually have two villages in our town. We have the village of Norwich and the village of Potsdam in our town. So, we're spread out quite a ways. It used to take us about four-and-a-half, five hours. Once we started getting better equipment and could keep one of our plow trucks, I broke everyone's route into another plow route, which took off about an hour-and-a-half of plowing. Now, we're down to about three-and-a-half hours."

"The town of Potsdam's crew is one of the greatest in New York State," John said. "They all work hard, summer and winter. It's comforting to know you can count on your employees when you need them the most — snowstorms, a storm in summer. Without a great crew, my job would be difficult. I'd also like to add the town's part-time and full-time clerks Peggy Brusso and Sally Boslet. They both help me develop my budgets and keep track of all expenditures. Without them, the financial part of the job would be way more difficult."

The department has experienced little turnover since John took over as highway superintendent.

"The older fellows that were here are pretty much all gone. Since then, only a few guys retired since I started. That's mostly because they turned 55 or 60. I hear all across St. Lawrence County or different parts of the state that everybody's having a hard time getting people to work and I have all kinds of applications with good people in them. I've actually shared my applications with different people and places here if they want to hire people. I've shared them with the village. I've shared them with a local construction outfit that owns the blacktop plant here. Last year, I gave them eight applications because they were looking for people to work.

"Because ours isn't a big turnover, I've had someone from New York State DOT right here in Potsdam. I sent two people to him to go to work. One guy I hired this spring worked for the state for 10 years, then he switched over. He was happy to come here. Says they're having a lot of problems with the state."

"You can roll those funds over to the following year but we've never done that," he said.

The department gets the job done using a modest fleet of equipment.

"What I've been doing and what's been a help to the taxpayers in my budget is when we purchased our dump trucks. Most every superintendent has what they call a municipal lease. You're actually leasing to own it. Say the vehicle is worth $200,000 when it gets to you. We put it in the budget and pay $50,000 a year for four years. Then we pay $1 at the end and we own it. Basically, instead of saying we're putting $200,000 in there and raising the budget up to $4,000, we're leaving $50,000 in there. What I've been doing is when that's done, we buy another one and sell the oldest one. You're still keeping the budget at $50,000. It never goes up or down. The only thing I told the board was if it happens to take a big jump, instead of four years, we'll have to go to five and keep it right at $30,000. That way, we're not raising the budget up too high.

"I applied for one of the grants for a dump truck and the state gave us about three quarters of the money and the town gave us the rest, which allowed us to get to that point where we're getting better on equipment. Orange County was getting all kinds of equipment through the state. So, I said to myself, ‘How the hell are they getting it?' Well, I found out how they did it and approached our senator on it. I wrote him a letter asking if we could get the whole thing, the whole $190,000. I didn't hear a lot from him. So, I wrote another letter. Then, one Friday night, he called me when I was on my way to a Clarkson hockey game and asked me what I wanted. So, I told him.

"He said, ‘I don't know if I can give it all to you.' I replied, ‘If I didn't ask you, I wouldn't be getting anything.' He laughed and they sent me the paperwork. And it's a lot of paperwork. Instead of me giving them one signed contract, they asked for 12. Why not just take one contract and give it among the 12 people who are supposed to get it? But the town, the representatives, the lawyer all had to sign 12 different ones and send it back."

What's your favorite part of the job?

"To be able to work with my sons during their part-time summer positions."

"Trying to keep the budget balanced while managing the changing demands of the residents."

"Keeping the roads safe during the winter months and upgrading roads."

"When my crew completed my first grant award project (industrial access project) in 2000."

"The ice storm of 1998. I had to be the highway superintendent and chief of the volunteer fire department at the same time."

Most memorable part of the job?

"For the first time in 15 to 20 years it was frustrating to keep the old equipment running, obsolete parts and things wearing out. The last eight to 10 years the department has managed to replace most of the older equipment. Only a few of them remain."

What surprised you the most?

"How easy the job has been with a great crew who takes pride in their work and keeping our township looking good. I can send them out to do a job and I know it'll be done right."

"That would be keeping my position for the last 26 years and never having anyone run against me in an election."

Looking ahead, how would you like to be remembered?

"I'd like me and my crew to be remembered as hard-working guys who were always out there. We kept the town looking nice for the residents and made the residents proud to live here."

About the Town of Potsdam

The town of Potsdam is located in the Adirondack foothills, in the center of St. Lawrence County, N.Y. It's home to two villages, the village of Potsdam and the village of Norwood. The town hall is located at 18 Elm Street and the Town Court 35 Market Street, Potsdam, N.Y.

Since its formation, Potsdam has been considered a cultural and educational center. It is rich in education and technology, hosting the State University of Potsdam and Clarkson University, two exceptional learning institutions. Potsdam also is proud to have one of the state's finest public school systems and a progressive medical facility, St. Lawrence Health System.

A square 10 miles on each side, the town was established on Feb. 21, 1806, upon an Act of the Legislature. David Clarkson and Associates purchased this land in 1802. In 1803, land agent Benjamin Raymond was one of the first settlers to the region. He built a hut on the banks of the Raquette River and his charge was to sell land, build dams, businesses and lay out roads and streets.

Today, the roads and streets in Potsdam are mainly as Benjamin Raymond laid them out, as straight as possible to every town near here. Someone once asked Raymond if he planned to have all the roads lead to Potsdam. He replied, "If anybody got onto one of these roads, he could come to Potsdam." The catchphrase was born "All Roads Lead to Potsdam. P