Highway Superintendent Steve Hart and the Town of Parishville 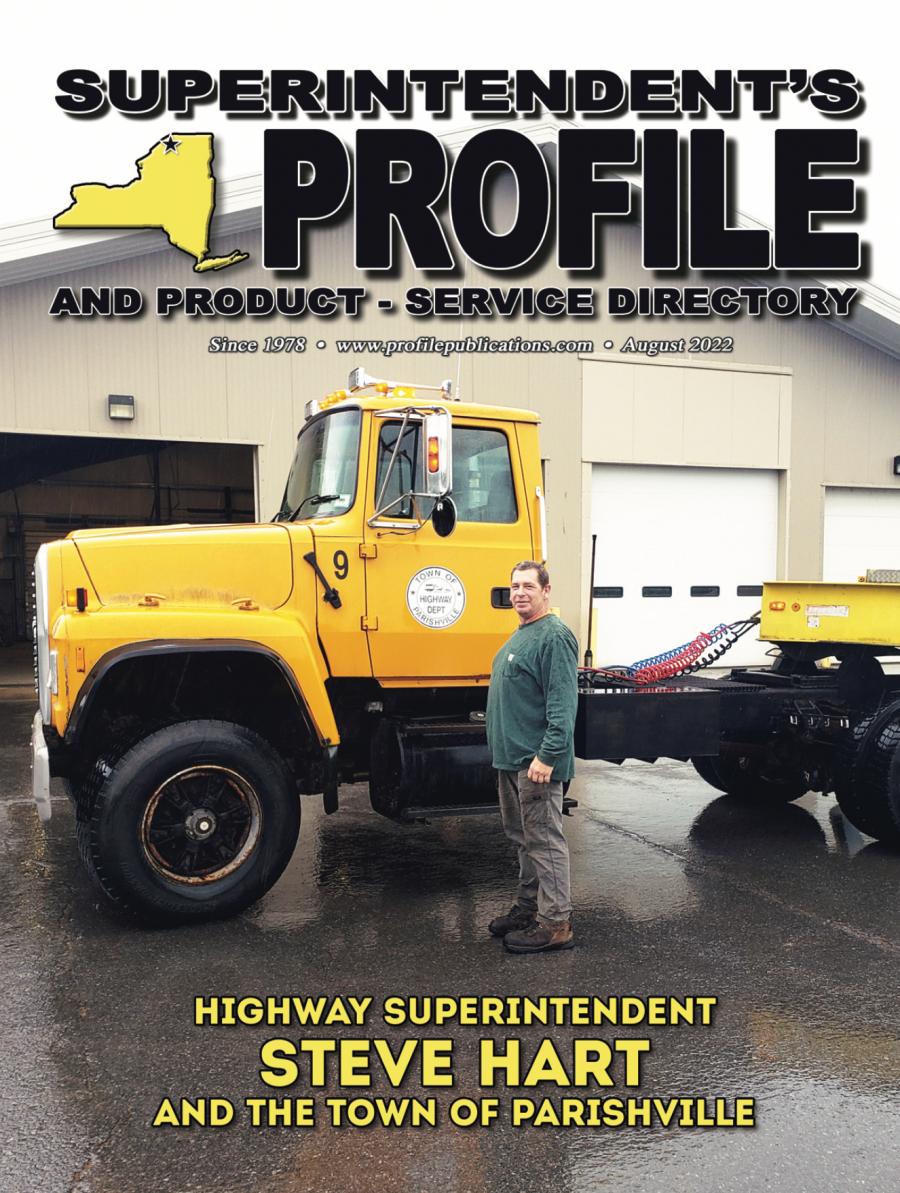 Steve Hart is a man on the move. Whether struggling to keep the town's budget in the black, providing the best services for the residents or running a part-time logging business, he's always doing something.

For the past five years, that something has been serving as the highway superintendent of the town of Parishville.

"I've lived here my whole life," he said. "I started working when I was seven years old at the neighboring farms for $2 a day. I was feeding the cows, cleaning the barn and helping to cut the wood. I began selling it when I was 13."

Steve finally saved enough money cutting firewood. Before he graduated, he was able to pay his way through college. After college, Steve went into criminal justice.

"I wanted to be a police officer but at that time, there weren't any openings in the area. By the time I started getting job offers, my logging business was doing pretty well. I did that until I was 32."

"All the roads were closed. I went to the highway superintendent and asked if he wanted help clearing the roads. He did, so I jumped right in. They left and I wanted to stay and keep clearing roads. Part-timers did that.

"During that time, one of the regular highway employees retired. That's when I started working for the town. I worked for the town for 20 years and then ran for the highway superintendent's position in 2017. I started my four-year term in 2018. I was the deputy for four years prior. I knew everything about the job before I took over, so there weren't any surprises."

What was the real story behind wanting to become highway superintendent?

"When I was a kid, I spent a lot of my time hanging around town hall listening to politicians. Back then, I used to think someday it would be nice to run and be the highway superintendent. Not thinking that I would, but I did.

"After working here for 20 years, I knew everything about the job. I figured by running for highway superintendent, I'd make sure I got those things done.

"So, I ran against the prior highway superintendent. He said he was going to retire. Before the elections, when it was coming time to file the petitions, he decided to run again. I'd already been telling people for two years that I was going to run.

In his "free" time, Steve still runs his logging business part-time. He also enjoys fishing, four wheeling and snowmobiling. Living in a rural area, the trails are "right outside my door," he said.

When it comes to facilities, Steve has a garage, eight truck bays and eight bays for the plow trucks.

"It also has three work bays for maintenance, fixing and fabricating, a parts room, break room, my office and a welding room. It's a fairly new garage that was built in 2010. The salt shed holds 400 tons of salt. We maintain the remaining section of State Route 72, which is 17 miles long. There's also a new cold storage building with six overhead doors for storing equipment, tools and things we want to keep undercover but don't need to be heated."

As superintendent, it's his job to maintain the town's 177.54 lane miles of road — 22 miles of which are gravel and 46 are paved. That translates into five plowing routes that take about 3.5 to 4 hours to complete.

When it comes to his men, "I'd like to see my guys get some recognition. I'm the highway superintendent, but they're the guys with the boots to the ground. They do a fantastic job. We work well as a team. If not for that comradery, we wouldn't get nearly as many projects done in the short window we have."

Under Steve's direction, the town of Parishville's highway department functions on a total operating budget of $1,462,500. That includes salaries and benefits for employees and an annual CHIPS allocation of $270,084. The town also receives $71,527 for PAVE-NY and another $61,178 for Extreme Winter Recovery.

The department is currently getting a new auto truck about every three years.

"It used to be every two years, but with the cost of trucks now, we're having to stretch it out a little more. As far as budgeting for new equipment, the town board supervisor put $75,000 a year into a separate account for buying equipment. Then, I do a five-year plan and try to use the money effectively. With that money, it takes three years in order to have enough to buy a new truck. Most of my money right now is going toward new trucks or keeping the fleet updated. A price tag for one truck is somewhere around $240,000.

What's Steve's piece of dream equipment? "I'd like to get a new grader next year and an excavator three or four years after that."

Steve also shares services with other counties, so if he needs something they have, he can borrow it.

"We work with six other towns back and forth. Most of the services are helping with paving, putting up their sand or if they need extra trucks. We're more fortunate in that we have a bigger crew and enough trucks."

Steve has his eyes on several projects in the future.

"The first one is White Hill Road. It's rural and quite a ways away from town. It hasn't seen a lot of paving maintenance because of a small population out there. It still has to be filed. There's about 14 miles up there. I'd like to start paving next year. It's going to take several years to complete. The last year of my term, the one main road in town milled Potsdam Parish Road. I'd like to see it paved from end to end."

Now, five years into the job, what's been Steve's favorite/least favorite part of the job?

"My favorite is knowing that you're helping people and making it safe for them to travel. We're actually doing a public service. My least favorite part? Always the winter."

"You barely get to touch on the roads and they're starting to pair up and then it starts snowing again. You have to make the call of whether to keep the trucks out or send them home. You have to time all that in between the school buses."

"Being able to do all my own work on the computer. I can do it now."

"Trying to get everything done that needs to be done. It's hard to get five miles of road ready to pave every year along with doing the other work. You're scrambling to get things done so you have your roads paved for the next year."

"There really hasn't been any big disappointment. It's only my fifth year and I had everything figured out what I was going to do. Everything's been going pretty well. Other than a few minor accidents with the men, I haven't had any big upsets."

"Making sure the roads are kept plowed so the school buses and the people can travel safely."

"Five months into my first term we had a big rainstorm and one of our roads washed out. It took 167 loads of gravel and five culvert pipes to fix it. Two other towns — Hopkinton and Lawrence — came to help and it was fixed in two weeks."

"When a taxpayer tells you how good a job you're doing."

"When your men work all day and everything works like clockwork and you don't have to micromanage. It feels good to know that they can all go out and do their jobs by themselves."

In the end, I asked Steve if the job was everything he'd hoped for.

"It's exactly what I thought it would be."

About the Town of Parishville

Parishville was once inhabited by the Mohawk Indian Tribe. New York State made a treaty with the Mohawk Indians on March 29, 1791, in which they surrendered title to their lands. As soon as possible, these lands were to be put up for sale according to an act of the legislature. The principle purchaser was Alexander Macomb.

After selling several of the 10 towns, Macomb dropped out of sight, but he turned over or sold the property still in his possession to William Constable who sold it to de Chaumont on July 24, 1804. He in turn sold it to David Parish on Dec. 2, 1810, and the town was named after Parish. Before a single settler had begun to build a house, careful plans for the town and industries had been made. A Mr. Crary had surveyed the region in 1809, which met with Parish's approval.

There is a possibility that the Russell Turnpike had already been cut and that Hoard's Road or path was connected with it. In 1810, Mr. Hoard, with workers recruited from Vermont, enlarged this path into a road wide enough to permit horses and wagons for hauling building materials. In the meantime, the town of Parishville had been surveyed and cut into lots.

The first settler was Luke Brown. He and several others came from Springfield, Vt., to work on the above-mentioned road. Parish let him choose land for a farm. In March 1811, he brought his family to the farm (which is now owned by Gary and Jane Snell) located now on Route 72. They immediately tapped the nearest maple trees to begin sugaring since white sugar was very expensive.

The following March 30, 1812, the first white child was born and christened Luke Parish Brown. Parish gave the child 50 acres of land for his name. The township of Parishville was formed March 18, 1814.

Parishville once had 14 mills located by the Gorge in the hamlet of Parishville and several others outside but still in the township. The Industrial Era lasted only about 35 years. The residents are proud of their Parishville Hopkinton Central School and the town hall, which is in good condition and houses the town offices. There also is a newly constructed Parishville highway department building on Rutman Road and the Kunoco Food Mart with gas pumps is located in the hamlet of Parishville. There are two fine restaurants, The Silver Café and The Timber Tavern. There are sand and gravel businesses and logging is still going on in the South Woods, town of Parishville.

(History courtesy of https://www.parishvilleny.us/history.html and all photos courtesy of the town of Parishville highway department.) P