Superintendent Jeff Martin and the Town of Mayfield Highway Department 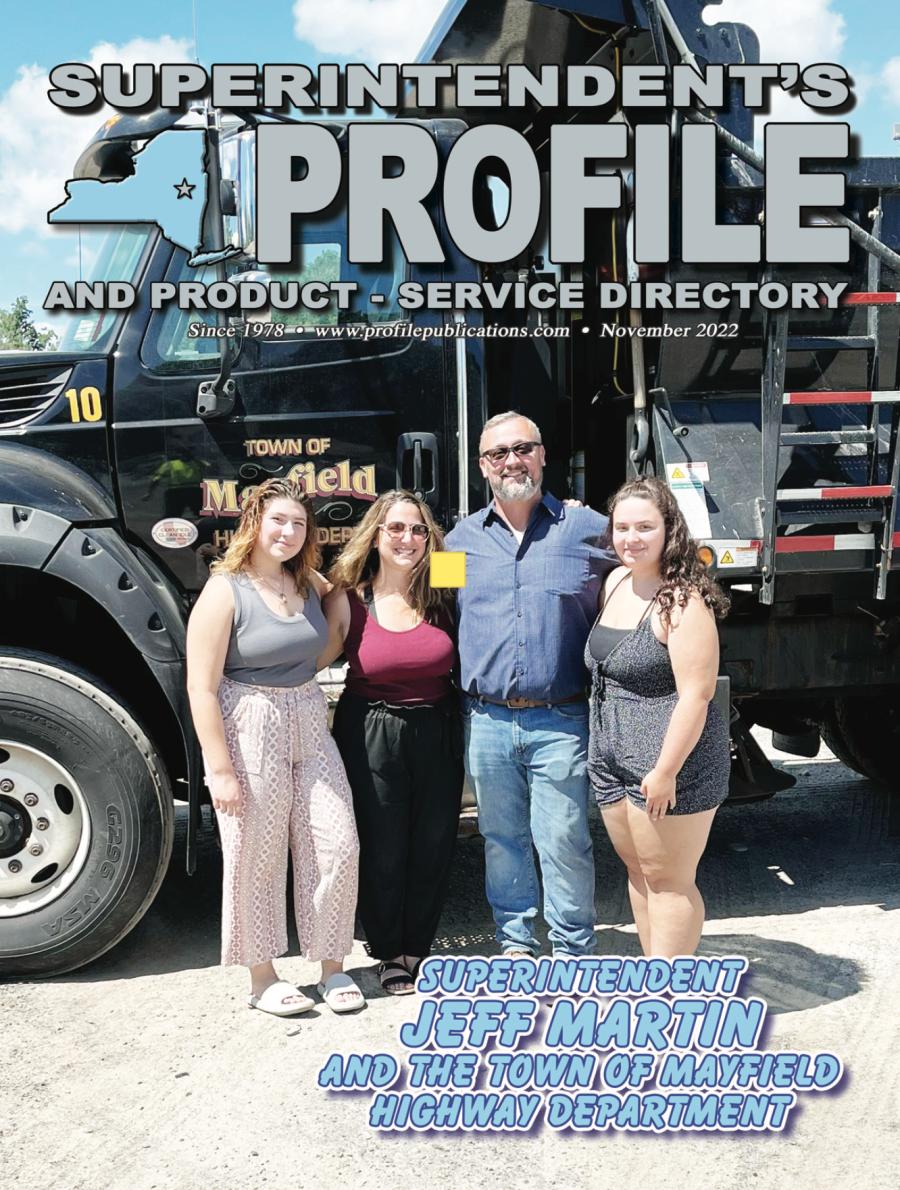 Jeff Martin, superintendent of highways of the town of Mayfield, is a straight shooter, dedicated, hard-working, in-your-face (in a good way) kind of guy. Not one to shy away from controversy, Jeff is known for speaking his mind and getting things done.

Born and raised in this history-laden town, Jeff graduated from Mayfield High School in 1998.

"That's where I met my wife," he said. "She was a senior and I was in the 10th grade. I also had a best friend who lived on a farm. I worked there from when I was 12 to 16 years old. During that time, I'd be on the farm driving tractors, bulldozers and loaders. I'd also bale hay, mow, milk cows and pick rock. They were like my family. I bought property off them and now I live on the farm I grew up on.

"What's interesting about that is that several of the more recent superintendents all have backgrounds in farming. You learn so much at a young age like when there's a problem and you can come up with a solution. You learn lots of different things. Never doing the same thing all the time. It's like being a jack of all trades and master of none."

After graduation, Jeff went to work for his father-in-law's business, Towns and Leather.

"Now, it's my wife's business. I retired because I got dilated cardiomyopathy. My heart should be four centimeters. Mine was 8.9 and my pump function was down to 10. I go to Cleveland Clinic every six months because I was on the heart transplant list. Not anymore. Now it's up to 45. My folks like to hear that."

Jeff worked full time for Towns and Leather for 21 years. Starting from the bottom, he worked in the factory cleaning, plowing and taking care of the maintenance. Then, he went through each process of manufacturing leather. In 2008, he became senior vice president of production facilities while supervising 90 people in a factory that sent him all over the world.

So, how did he end up in the super's chair?

After retiring from Towns and Leather, Jeff became the highway superintendent for the town of Mayfield in 2020.

"It was like a dream come true. I love this town. I've always wanted to do something for my community at some point when I got older. That's why I had to run for office."

Jeff and his wife, Tricia, have been married for 20 years.

"She has a business degree from Siena College and is the vice president of customer service for Towns and Leather. She's my best friend. I wouldn't be half the man I am without her."

Tricia added this about her husband's job.

"I couldn't be prouder of Jeff doing something he's passionate about. I can tell he found his calling helping people, making safer roads for his family and friends, running large equipment and being outside in the beautiful Adirondacks."

The couple are proud parents of two daughters. Kendra, 18, recently graduated from high school. She wants to study creative writing in Orlando, Fla. Kayden, 14, is a high school freshman.

In his spare time, Jeff loves hunting, fishing and riding snowmobiles around his house.

When asked about retirement, Jeff says it's too early to tell. "I like things the way they are … for now."

"The town of Mayfield is the second largest town in Fulton County," Jeff said. "Our department's facilities include 12,000 to 13,000 square feet of garage space and another 9,000 square feet in storage. There also are eight bays; a salt shed that holds roughly 500 tons under cover at one time; my office; and a lunch/break room."

As highway superintendent, it's Jeff's job to maintain the town's 57 lane miles of road — two are gravel and 55 are paved. That translates into six plowing routes that take approximately 3½ hours to complete.

"I'll say one thing about my group of guys. They're all from the town except one. They care about what they do and want to make it a safe, better place to live. They're amazing. There may be moments when there's not a lot going on, but when it comes time for an emergency, they're there, making my job easier."

Under Jeff's guidance, the town of Mayfield highway department functions on a total operating budget of a little more than $1 million. That includes salaries and benefits for its employees and an annual CHIPS allocation, Pave New York and Extreme Winter Recovery of $517,000.

To fulfill its responsibilities, the department uses a convoy of equipment. When it comes to his fleet, "The town has always bought new," Jeff said. "The first thing I bought used was a bucket truck from someone in town. I paid $2,500 for it. It's from the ‘80s but still works great. We don't use it all the time. So, it doesn't wear as quickly.

"The last year or two, I bought a $190,000 garbage truck. It was a bigger one than what we had before. The other one was broken down all the time. Our 2008 one got pounded on. They're stopping and going on and they were going right through the day. It made it so much easier buying a new one because we were breaking down and being late for picking up."

What would Jeff's dream piece of equipment be? "We have everything we need to do our job safely."

Like most highway superintendents, Jeff admits that technology can be a good thing.

"The only computer we really use is when we're salting the roads. There's a computer inside the truck that tells us how much we're putting out per lane mile. A lot of supers do that or have that piece of equipment and many are moving toward that. I just upgraded mine last year because it saves us a lot of money and salt and it's handy. You can put GPS on them and there's lots of things you can do with that computer inside the truck."

When it comes to the job, Jeff admits it's "everything I expected. I love it. I love being outside. I was made to do this job. I should have done it a long time ago."

What would he say it's the worst part? "The paperwork. It's crazy. I do everything on my own — the payroll, everything. Most superintendents are doing it themselves these days. I had a secretary at Townsend whom I truly miss. Sometimes us guys definitely need one. Women pay more attention to stuff than we do."

What's been the most difficult? "Making everyone happy."

The most important? "Making the town safe."

Your proudest moment? "Finishing a job."

What led him to seek the position? "I always wanted to do something for my community that made a difference."

What does he love the most? "Working with the guys. I'm down in the hole. I'm proud of that. A manager who gets down in the hole and gets dirty with his crew. How they work together, our team and they're always willing to help. No matter what."

What has he changed? "The atmosphere just by talking to them, treating them like humans and asking for their ideas."

What experiences from his background have proven helpful in Jeff's current position? "Experience in managing large projects, people and machinery and responsible for finding solutions to problems."

When asked to describe his job in one word, Jeff hesitated for a moment before answering, "Satisfying. I literally love what I'm doing. That's what makes it worthwhile. Every day is a new adventure. You come in and think it's going to be a quiet day then all hell breaks loose. A tree's down, everything's flooded. You never know."

Like most highway supers, when it's all said and done Jeff wants to be remembered for "doing a good job, helping people and keeping the roads safe."

The Town of Mayfield

Mayfield is a town in Fulton County, northeast of Gloversville and Johnstown. The town also contains a village named Mayfield.

The land that is now the town was part of the Mayfield Patent of 1770. The town was established in 1793 from the town of Caughnawaga in Montgomery County before the formation of Fulton County in 1838. It was one of the first three such towns formed. Part of Mayfield was taken in 1805 to form the town of Wells (now in Hamilton County). An additional part was added to Wells in 1812. Mayfield was reduced once again in 1842 to form the town of Perth. The early economy was based on lumber and leather production. The Oliver Rice House located on Old NY 30 was listed on the National Register of Historic Places in 1995.

(History courtesy of the https://en.wikipedia.org/wiki/Mayfield,_New_York). P