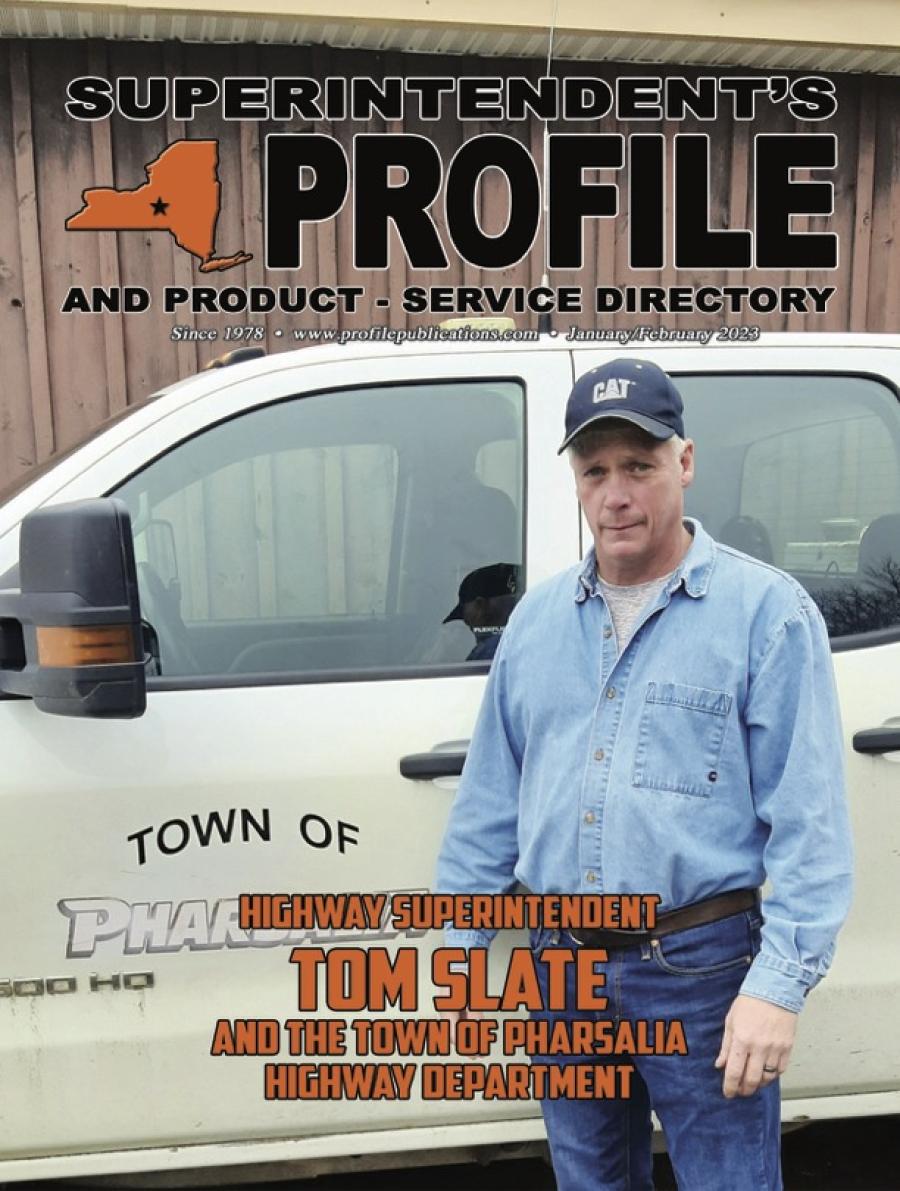 It doesn't take long to realize that Tom Slate is the right man for the job. Obviously a man comfortable in his own skin, Tom exudes confidence as he tells of his journey to become the highway superintendent of the town of Pharsalia.

Born in Norwich Hospital, Tom grew up in Plymouth, a neighboring town of Pharsalia.

"After graduating from North High School in 1991, I worked in a body shop nights and Saturdays until 1995," he said. "Then, I got my CDL license. After that, I drove for my brother's trucking business, Wayne Slate Excavating, for 1996 and the summer of 1997."

Then, things began to change.

In the winter of 1997, the former highway superintendent asked Tom about working part-time winging and helping out plowing and other things.

"I said yes because with the trucking business and excavating, I didn't have a job that winter anyway. I went back to work for my brother in the summer of 1998."

After all that, how did Tom make his way to the super's seat?

"In October, my boss said a full-time position was open if I wanted it. So, I took it. I worked for the town from 1998 to 2010 as everything from a truck driver, equipment operator and laborer. When my boss retired, I ran for his job in 2009 and took over in 2010. Knock on wood, I'm still here."

On a Personal Note

Tom is married to wife, Brenda, a former aircraft assembler at what used to be General Electric.

"She had a bout with cancer," Tom said. "But everything is good and now she's a homebody."

This super is the youngest of five siblings: Chuck, Doug, Jenie and Wayne. He also has two stepchildren, Matt Meyer and Kristie Meyer.

In his spare time, this homebody likes "cutting firewood, logging and working in my garage. Those are my off-time stress relievers."

He also has his own personal garage at home. "I do a lot of work there, fixing my neighbors' stuff and mine."

When it comes to retirement, Tom has five more years to go. "That'll give me about 30 years. I'll be 55. Hopefully, if nothing happens, I'll get my 30 in and then see what happens after that."

The highway department's facilities were built between 1966 and 1967. The main garage is 40 x 60 in a single-story building and the cold storage, which was built in the 1970s, is 40 x 50. The town hall sits on the property where they hold court and have board meetings. Four or five years ago, the highway department built a pavilion at the town park, approximately a half-mile from the town barn.

"There's no cover salt shed, only sand," Tom said. "We use hardly any salt unless there's a bad ice storm. Then, we'll use it on the dirt roads. You really can't use salt because it warms the roads up and it turns into mud and flop in the middle of winter and that's bad."

Tom also has what they call a satellite for the county highway.

"They keep some salt and sand mixture here because we're so far away from Norwich. They're out there plowing in the middle of the night and run out of sand. They don't want to go all the way back to town to get more sand to plow the roads. They stop in here and load their piles. Then, they keep plowing and sanding. They call it a satellite so you could say it's a satellite for listening on the county highway. They keep some salt sand mixture here for their roads."

As the highway department's "commander in chief," Tom is responsible for maintaining the town's 83.98 lane miles of road and 47.65 of center line miles.

"Most of our roads are still gravel while roughly 10 to 12 miles are paved. That converts into three plow routes that take about 2.5 hours each."

Tom knows the importance of having a good and loyal staff. His crew consists of two part-time employees, Art Grover and Carmon Lazaro, and full-time employee Raymond Clapper, who help him serve the town's 593 residents.

"My staff makes coming to work worthwhile just to see their level of experience and dedication. That's one of the strengths this department brings to its residents. I've seen these guys do some amazing things when the chips are down."

"I broke my leg pretty bad last December," Tom said. "I had surgery and a rod inserted. The towns of Plymouth, Octselic, McDonough and Pitcher were a big help. In the wintertime, me, Ray and a seasonal worker have plow routes. When I went out with a broken leg, it was going to be pretty near impossible for them to do it with two trucks. So, I called those towns. Actually, I was in the North Hospital emergency room calling in town for help the next day because they'd never been able to do it by themselves."

To fulfill its responsibilities, the town uses a modest fleet that includes:

Who's responsible for maintaining the equipment?

"We do all we can in-house," Tom said. "If we have the time and the room in the garage, we do 90 percent of it, including our own tires, brakes, oil changes. If it comes to anything more major, we use our local truck shop that specializes in heavy equipment.

"I'm probably the most mechanical one," he added. "Ray Clapper's the only full-time guy I've got. He's been here 22 years. He's 66 and was going to retire in November, but I think he'll wait and put it through in April. I've got part-timer Art Grover. He's 80 years old and been here as long as me. I have another very, very part-timer, Carmen Lazaro. He's 70.

"That's all I have for help right now. Art cut his thumb really bad on a table saw accident at home so he's in the process of healing. Carmen broke his foot at home working on a deck project and Ray was out all summer with a hip replacement. So, it was pretty much just me. Thank God for the other towns."

When asked if the job is everything he expected, Tom said, "Knock on wood. It's been pretty good. It's a small town and I don't really get many complaints about anything. We do the best we can with what we got and people understand."

If he could change anything about the job what would it be?

"I don't know if it's a job or not, but just getting younger people interested in this kind of work for towns and highway departments," Tom said. "That's a challenge right now. It's not just for me but others too. We're all down people and it's taken its toll."

What's surprised him the most?

"I don't know if I've had a lot of surprises. I pretty much knew the job well before I ran for it. Like I said, I worked here for 12 years and near the end, I was pretty much running the place."

What's the most difficult part of Tom's job?

"Keeping the older equipment going. That has nothing to do with being old. They're simply outdated. We don't budget for it too much. I know if something came up, I have money in reserve that I could use. I try to put as much money as I can into the infrastructure.

"A newer vibratory roller would be nice," he added. "We have one, but she's getting pretty old. I'd also like a deck over equipment trailer to move equipment, like an excavator. That would help instead of driving the roller from job to job. You can put the roller on the trailer and take it from one job to another. Now, we try to start on one end of town and work our way back to that spot. Then, bring everything back to the barn at the end of the season."

Favorite part of the job?

"Taking on an old dirt seasonal road or something and making it into something that looks and rides nice."

The most important part?

"Keeping the residents happy and keeping the roads as best as we can."

"Keeping everything running and working as it should."

Every job has good days and bad. For Tom, a good day is when he can look around at all he's accomplished as well as receiving positive feedback from the public.

When the time comes to turn over the superintendent's reins to his successor, how would Tom like to be remembered?

"As someone who always gave a fair and honest opinion, whether they agreed with me or not."

About the Town of Pharsalia

Pharsalia is an interior town of Chenango County, located in the western half of the county, northwest of the city of Norwich. It has a population of approximately 570 people as of 2017. The town was named after a commonly accepted name of the decisive battle in the Great Roman Civil War, where Julius Caesar defeated Pompey in 48 BCE.

The town received its first settler in 1797. Pharsalia was founded from part of the town of Norwich in 1806 as "Stonington." In 1808, the town was renamed "Pharsalia," meaning goddess of war in Hebrew.