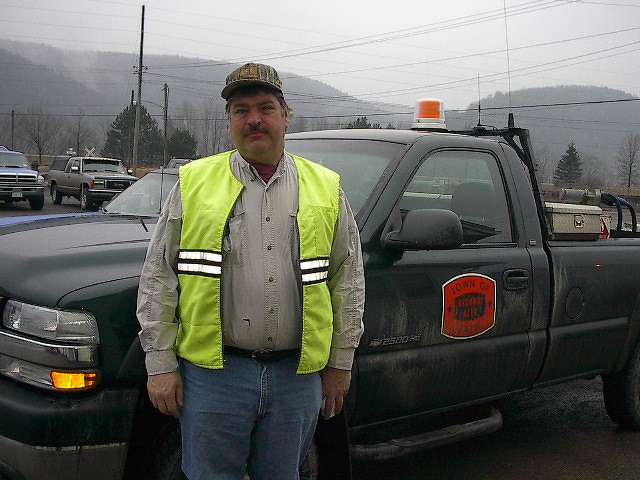 At first glance the Town of Bath’s highway department may not be what you would expect. In a world overrun by technology, this do-it-yourself kind-of-town believes in doing just that.

Under the direction of Superintendent of Highways James McGlynn, the town’s highway department does everything from developing its own cold patch to making its own hydraulic hoses.

For McGlynn, well, he is just doing his job.

A resident of Bath for 51 and a half years, McGlynn had years of preparation for taking over the helm of the highway department. He spent 33 years working for the town – 14 of those years he served as deputy highway superintendent and three and a half months as acting super before beginning his tenure as superintendent in 1997.

As McGlynn remembers, being appointed acting superintendent was a bittersweet moment. “For me, it was my worst day. It was June 4, 1985, when I took over for my father, Sheldon McGlynn, who was superintendent when he died on the job. I got it in my head that I was going to do the job, live through it and then retire. Sometimes I have my doubts.”

His wife, Karen, is proud of the work her husband does. “He shows concern for the town’s residents and for the safety of his crew. But I do worry about the long hours he keeps and I don’t like that he often has to work on holidays. Jim takes his job very seriously.”

Being the highway superintendent isn’t without its perks. Karen recalls when the couple’s sons, Kenneth, 33, and Thomas, 25, were young, “their friends always wanted them to talk their dad into not getting the roads cleared so early so they could have snow days.” 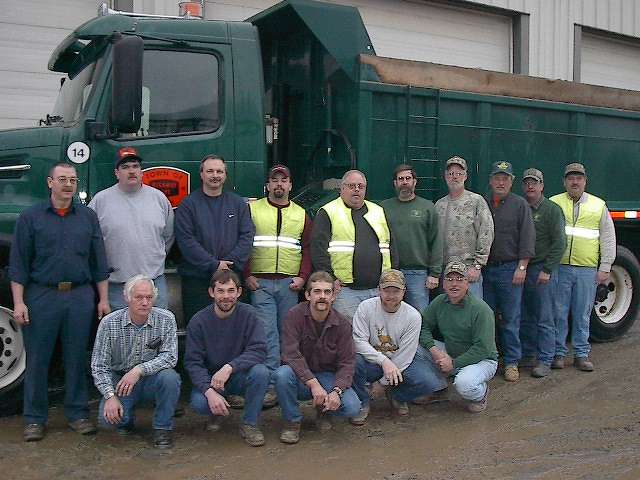 McGlynn is a member and former president (2003) of the Steuben County Highway Superintendent’s Association. In his off-hours he can be found hunting, shooting, camping or dabbling in photography. McGlynn’s term ends in 2005.

As superintendent, it is McGlynn’s job to maintain the town’s 144 miles; 90 of which are gravel (about twice that of other townships in the county) and 55 are blacktop. That translates into nine plowing routes that take three and a half hours to complete. During the winter, calcium is used to stabilize the roads’ cold areas. This procedure keeps ice from building up on the roadways. In the summer salt brine is used as a stabilizer.

In the spring the crew keeps busy working those roads with two of their graders. “We get the gravel off the shoulder and back in to the middle of the road. Then we stone rake it and roll it and our third grader does the patching.”

Unlike many of his counterparts, McGlynn and his staff developed their own “cold patch,” rather than purchasing a pre-mixed version at a local quarry. 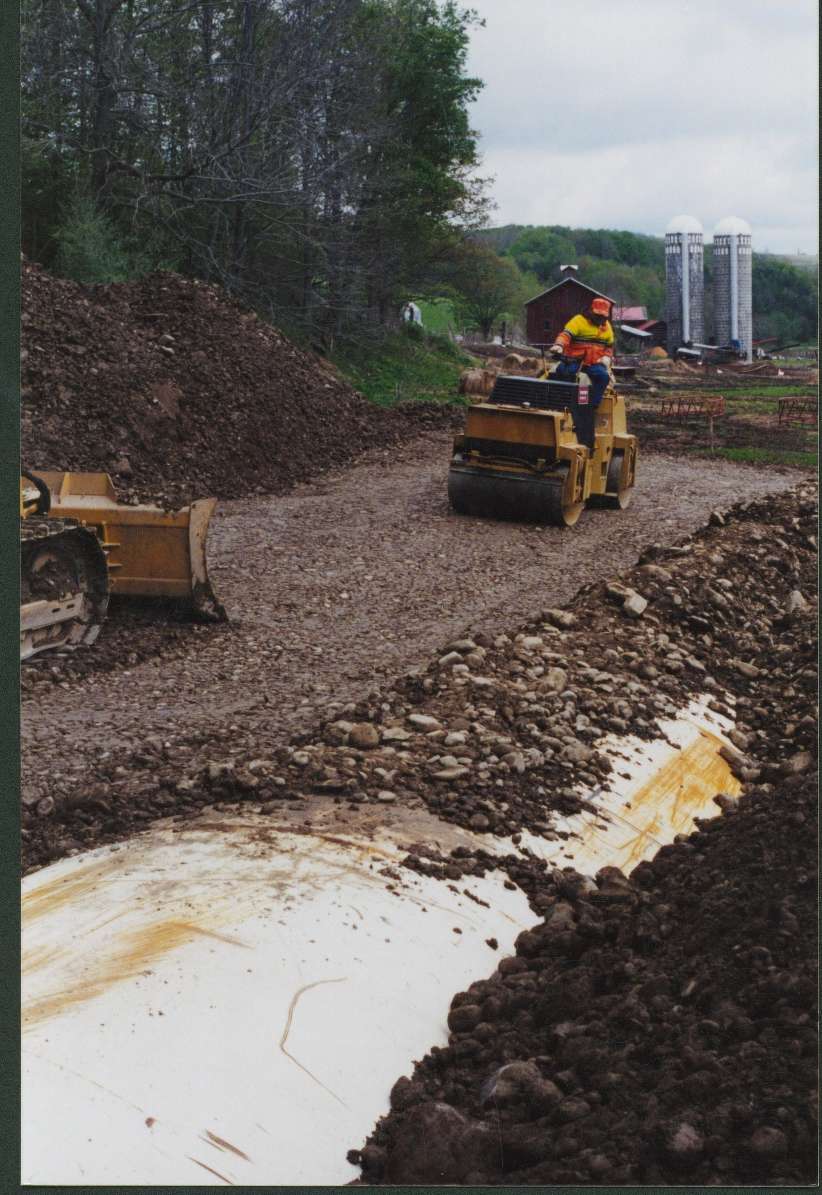 “We have been mixing our own right here for about 4 to 5 years,” he asserts. “The oil is brought in and then we bring the stone and mix it with the loaders. It works better than what you buy. I’m not sure why that is – maybe a better quality of oil that stays in the holes. We run 80 percent 1A stone to 20 percent sand and 13 gallons/ton of oil. The oil is adjusted depending on how clean the stone is. The main reason we began mixing our own was because it’s cheaper. Counting the clean up it generally costs $20/ton. Patch at one of the quarries would run about $45/ton. Another plus is it also can be graded like gravel. It’s rolled in rather than patching a bunch of holes by hand.”

Other responsibilities of the highway department include maintaining the town’s 18 cemeteries and 14 bridges. If that’s not enough, during McGlynn’s tenure as super he has worked on four floods that were declared natural disasters.

“Those floods caused a total of $1 million in damage,” he reports. “The first one in 1996 was over $400,000. The one in 1998 was responsible for $200,000 in damage; one in 2000 caused $55,000 and the last one in 2003 caused $350,000. That has all been in the last eight years, in spite of the considerable improvements we’ve made to the roads. We put in rock, lock-line ditches. Some of the places that washed out the first, and maybe the second, time are finally getting taken care of but it’s frustrating. You work hard and get to where you think you are going to get ahead on things and then you are right back doing it again. We are still working on cleaning up after the latest one.”

But McGlynn’s efforts do not go unnoticed. One of the most rewarding parts of his post is found in the appreciation of the townspeople. “People say thank you all of the time. They support my staff and me and appreciate what we do. Residents will call to say, ‘Hey, did you know there’s a problem here?’ I appreciate that because with almost 150 miles of road it is tough to cover them all and know what’s going on.”

Under the watchful eye of McGlynn, the Town of Bath’s highway department functions on a total operating budget of $1,573,000, which includes salaries and benefits for employees and an annual CHIPS allocation of $100,000.

All of the department’s covered facilities are under one roof. The shop is the center and oldest section, measuring 105 ft. by 60 ft. It is equipped to perform most of the department’s repairs in-house. In addition, a 130 ft. by 80 ft. cold storage area was built in 1996, and the 60 ft. by 30 ft. office/lunch room/storage vault combination was erected in 1997.

“Our shop is well equipped to repair and fabricate parts for our equipment — from the newest to the oldest,” explains McGlynn. “We have built several gigs to hold parts for removal and installation. We also make most of our own hydraulic hoses with a machine that is set up to be totally portable. We have moveable stands for our snow wings for quick hookup and easy storage.

“The plows are equipped with removable jacks and we have a heavy-duty tire changer that is used to change all but the very smallest tires we use. With the amount and variety of tires in our fleet this machine saves us a great deal of money each year. We also have a fleet inspection license that allows our licensed inspectors to inspect all of our trucks. This program also saves money and keeps our fleet in first-rate shape from a safety perspective because the equipment is checked over more than once a year.”

As highway superintendent McGlynn has a lot on his plate, not the least of which is maintaining the town’s extensive fleet of equipment.

“Trying to keep up with the equipment is the most frustrating part of the job for me,” McGlynn admits. “Bath is a small town, but we have a huge highway system. If we don’t purchase a large piece of equipment every year we get way behind. Our trucks are 20 years old when we take them off line. The loader we are trying to get rid of was that old last year when we first wanted to unload it. You can’t work with old apparatus. If it doesn’t end up breaking down you usually end up spending more money on it than it’s worth.”

When all is said and done what would McGlynn like to be remembered for? “Leaving the roads better than when I found them but, like my predecessor, the town’s financial condition controls what I can do to achieve that goal. There are many old pipes in the ground and boxed culverts that were built when the roads were one or one-and-a-half lanes. I have been attempting to eliminate all of them and put guardrails on some of the steep hills. I have also been trying to get some of the heavier traveled roads shaped to hold the traffic.”

The Town of Bath is located in New York’s Conhocton Valley at Exits 38 and 39 on Interstate 17 of the Southern Tier expressway. Founded in 1793, it was named for Lady Bath, only child heiress of Sir William Pulteney of London. This is disputed by some historians who believe it was named Bath because of the similarities of the land with that of Bath, England. The Indian name for the location was Tanighnaguanda. Bath was formed on March 18, 1796. The town was incorporated on April 12, 1816.

The first court of common pleas held in and for Steuben County convened on June 1, 1796. The first court of general session was held in 1796. The first clerk of the county was George C. Cooper, formerly of Rhinebeck on the Hudson River. Making Bath the “county seat” alone was a sufficient inducement to attract settlers and professional men, merchants, mechanics and agriculturalists alike hastened to the town, hoping to be the first in their class to become early established in general favor and popularity. The courthouse was completed in 1797.

In 1796, Colonel Williamson, in an attempt to attract settlers to the area, had a one-mile racetrack built about one-half mile from the town. The idea worked and many people traveled to Bath to participate in the races or to watch. The big event was advertised as the “World’s Fair.”

The town’s surrounding landscape is a rolling plateau cut by numerous streams and steep sided valleys. Today it is dominated by farms and woodlands and boasts a great scenic charm.

The area is host to many leisure attractions. Fishing and hunting are popular favorites during trout, bass, deer and turkey seasons. Privately owned campgrounds and Stony Brook State Park provide additional recreational activities. Craft festivals, local wineries, the Corning Glass Center, Watkins Glen NASCAR races, water activities on Keuka Lake and band concerts in the park are just some of the activities in the area.

Bristol Mountain and Swain Ski areas are also close by for winter sports enthusiasts. Tying its past with the present, Bath has numerous listings on the National Register of Historic Places and serves as home of the Steuben County Fair, the oldest continuously running county fair in the nation. Corning, Elmira and Rochester, are within one hour’s drive, allowing access to metropolitan activities such as large sporting events, museums and