Highway Superintendent Mark Premo and the Town of North Greenbush 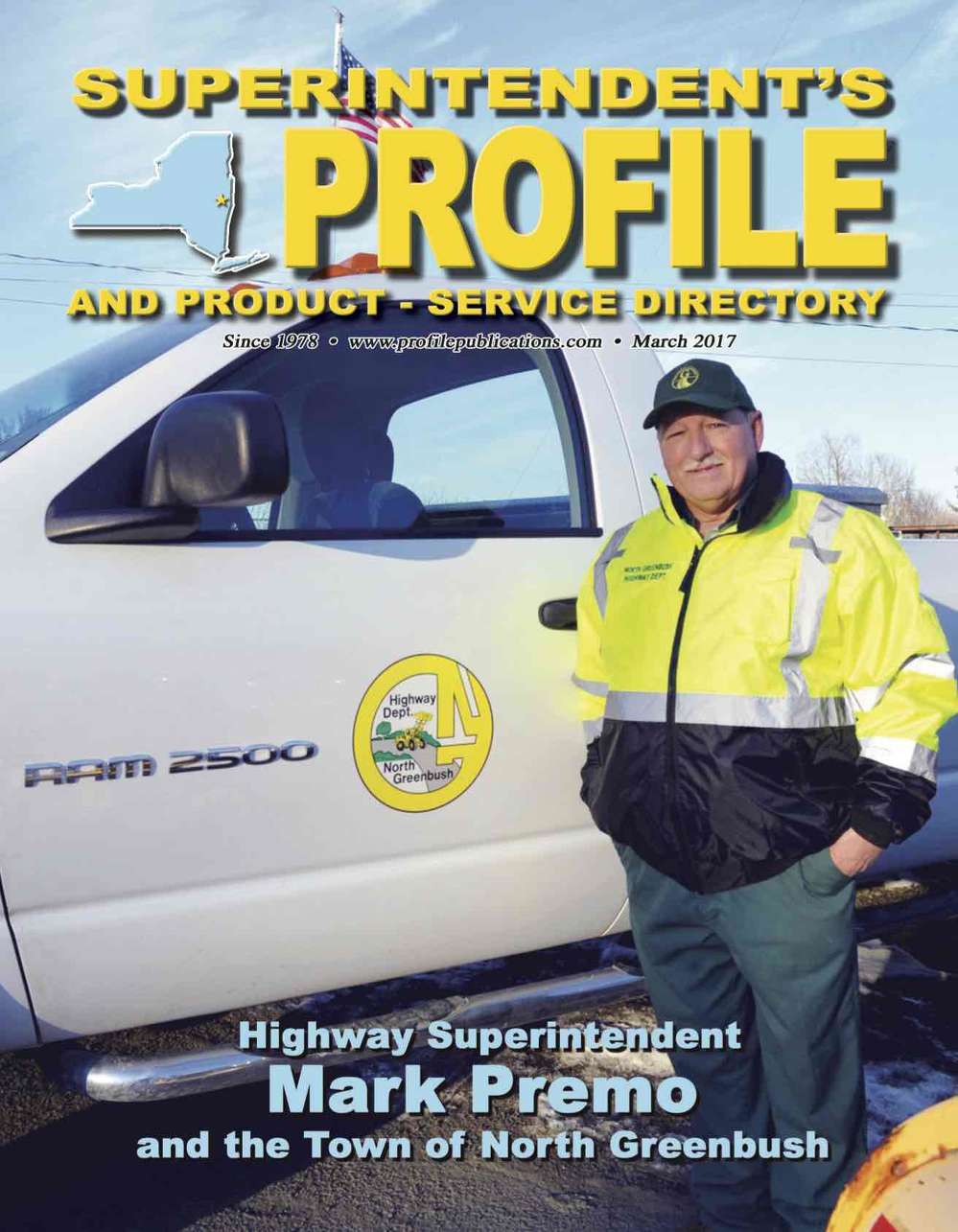 He sits behind a metal desk in the corner of the room. There is nothing pretentious about the man and his surroundings. With North Greenbush Highway Superintendent Mark Premo, what you see is what you get: a down-to-earth fellow who takes great pride in what he does. He loves his family. He loves the town where he spent all of his 59 years and he loves getting up every morning and doing his job.

Born and raised in this history-laden town, Mark graduated from Averill Park High School in 1975. After graduation, he held numerous jobs before making the highway department his home.

“After high school, I went into the auto body business,” he said. “I started at BOCES in North Troy. Then I did body work for Hedley Cadillac during high school. I was the first Averill Park student to get on-the-job training. After Headley, I went to Keilens Auto Body shop in Latham for a year and then to Webb's Garage, near Hudson Valley Community College, for eight years. I did auto body work in all those places. After Webb's, I went to Fruehauf Trailers, a worldwide tractor trailer company. My job there was a Class A mechanic, but I also drove tractor trailers. I was there 10 years before leaving in 1989.”

So how did he end up behind the super's desk?

Mark started as a heavy equipment operator with the town of North Greenbush highway department.

“After 12 years of it, things were pretty bad around here. It was either quit or run for supervisor. That's how I became highway superintendent. I ran in 2003 against my boss, Dick Roberts.”

Mark recalls the time when the town took over all the party lines and weren't going to give him a party to run on. 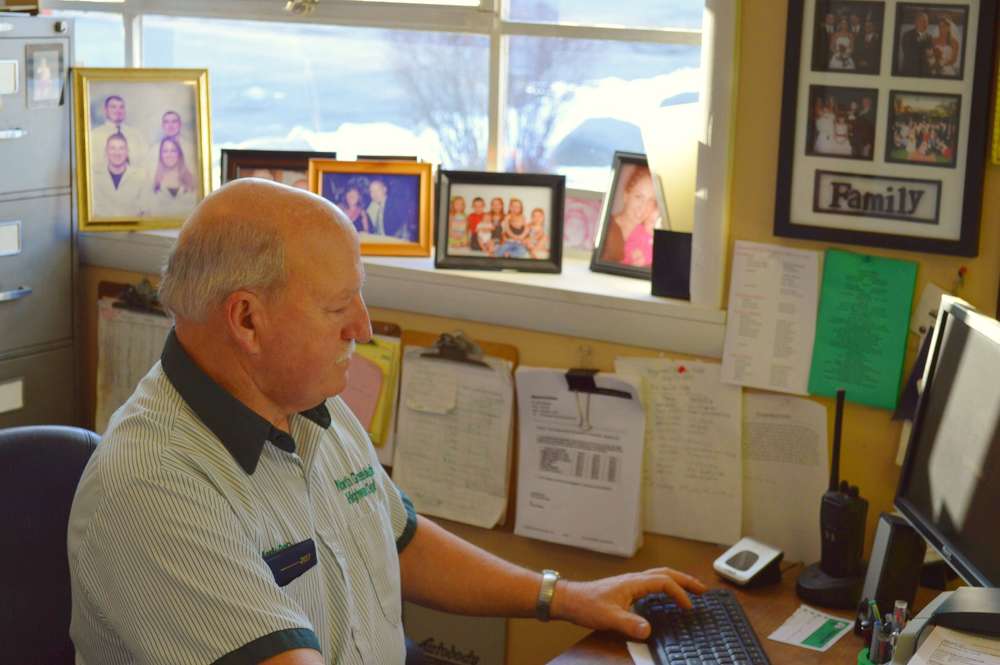 “I got a call from a woman one Sunday. She said, 'We're having a meeting at St. Timothy's Church. Can you come?' I said, 'Sure.' I go down and walk into the room, where I found 12 women and one man. The youngest was about 72. She told me, 'We're going to start a new line, called the Greenbush Party Line, just for you. We need 1,400 signatures by Thursday.' By Wednesday, they had 2,000. They also supported people for all the positions, including town supervisor and clerk, not just me. I got 76 percent of the vote on that line. It's not around anymore. It was only that one year. They never ran anyone against me since. I've been opposed since then, too, but the last two times no one ran against me.”

What drew him to the position? In a word, frustration.

Mark confesses he had other experience that prepared him for the top job.

“I purchased equipment and trucks. I also had administrative experience. I owned my own business for eight years, Premo's Ice Cream Parlor in Snyder's Lake. The town kind of drove me out of business. I had video games and they came up with a tax of $50 for each machine. I had a boat launch and they came up with a tax. They said I couldn't charge people to launch boats. I said okay, the launch is free but it's $10 to park. Everything you did, it was something else.” 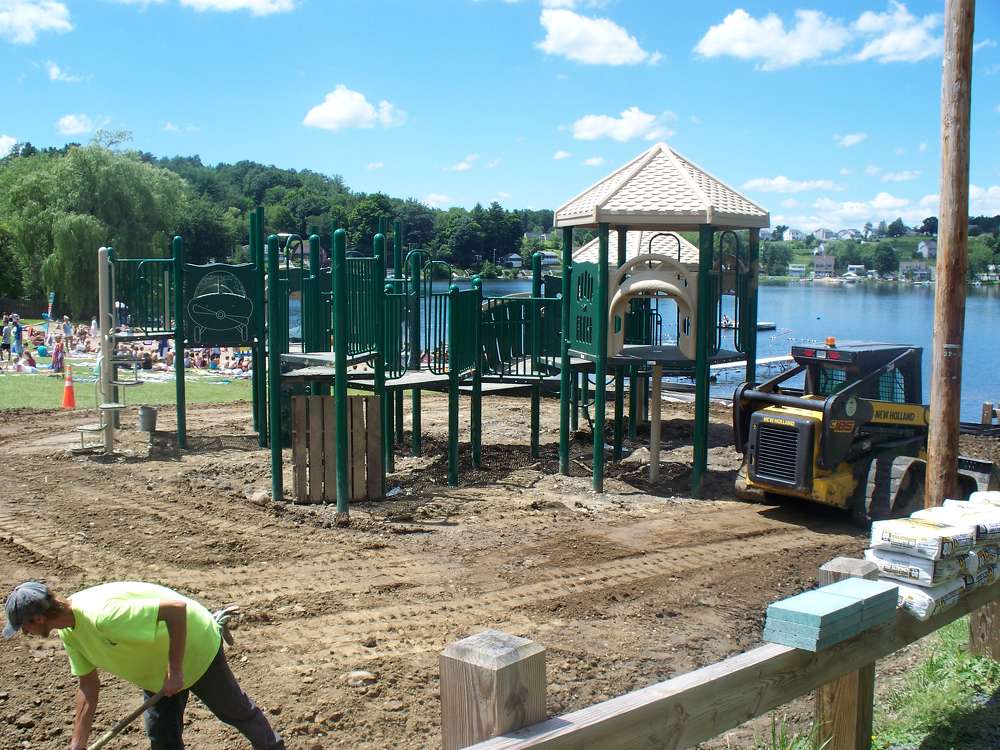 Mark sits on the board of directors for the Rensselaer County Association of Town Superintendents. In his free time, he enjoys playing golf and water skiing.

Built in 1963, the department's facilities include a 100 x 100 building that houses Mark's office, the lunch/break room, four interior bays with a 100 x 20 drive-thru.

“We can fit six trucks and a front-end loader inside. We have another building that holds two one-tons and a rack body truck and a cold storage shed with four bays. We're looking to put on an addition with three full bays. We recently gave the front of this building a facelift. It involved a new steel front, overhead and entry doors, insulation and 15 skylights.”

The salt shed houses 350 tons of straight salt and 450 tons of a salt/sand mix. Mark recalls, “It was four or five years ago, when we had all that snow. Probably had four feet on the ground. It never melted and the shed roof started collapsing. I didn't know what we were going to do. I did know we had to get that snow off. So I cut the lids off two 55 gallon drums, threw in a bunch of wood and fuel oil and lit it. Off went the snow but then we had to get new sides. All the ice came down and blew them out.”

As highway superintendent, it's Mark's job to maintain the town's 113.67 lane miles of road, all of which are paved. That translates into nine plowing routes that take approximately 3½ to 4½ hours to complete.

“I'll say one thing about the group of guys we have here. There may be moments when there's not a lot going on, but when it comes time for an emergency, they're there, making my job easier.”

Under Mark's guidance, the town of North Greenbush highway department functions on a total operating budget of $1,450,000. That includes salaries and benefits for its employees and an annual CHIPS allocation of $110,000.

When asked how he budgets for new equipment Mark explains, “The town has a highway and utilities group that discusses the equipment. They're penny pinchers, but the town was in bad shape and we were going through a tough time. One of the things I don't agree with is the way they make the highway department accountable for everything. If I want a new truck, I have to pay for it with highway funds. That's not the way it's supposed to be done. Now you're putting a $230,000 bill on us. That should come out of the general funds. When there's money in the general fund, the board can use it any way they want. When there's money in the highway fund, it has to be used for the highway. I can argue it both ways, but you have to step out of it and look at the big picture. It's the town.

I look for the benefits for the town. That's how it should be, but it's not the way it works.”

Like most highway superintendents, Mark admits that technology isn't always a good thing.

“It's easier for the driver and harder for the mechanic. We've had problems where you start relying on computers, then after a week of jerking around, you go back to the basics. I don't understand it. They're not more efficient. You have filters on the exhaust system that catch all the stuff. Suddenly, the light starts blinking on the dashboard. You have to pull over, push a button and it revs the engine wide open, burns it all and blows it all out in the air. How is that efficient?

When asked to describe his job in one word, Mark hesitated for a moment before answering, “Entertaining. Every day is a new adventure. You come in and think it's going to be a quiet day because all this other stuff is done. Then all hell breaks loose. A tree's down in the creek. Everything's flooded. You never know.”

Closing in on 28 years as highway superintendent, Mark's had many a proud moment, but one stands out above the rest. It came when he was recognized as the 2006 Man of the Year by the North Greenbush Democratic Committee. The plaque read: “Presented to Mark Premo in recognition of his outstanding contributions to making our community a better, cleaner, safer place to live.”

“I was surprised,” remembers Mark. “It was a nice ceremony with my family and all my guys there.”

When all is said and done, Mark Premo would like to be remembered that way; as someone who tried to represent the people and make the town a better place in which to live.

About the Town of North Greenbush

The town of North Greenbush was formed Feb. 23, 1855, when the town of Greenbush was divided into the towns of East and North Greenbush. It is located along the Hudson River, extending east about five miles. Its roots trace back to the colonial Dutch culture of the Rensselaerswyck Patroonship, established by Killian Van Renssselaer in the 17th century when the area was a Dutch colony. The name Greenbush comes from the Dutch “Greenebos,” a term for pine grove. The location opposite Albany and immediately south of Troy defined North Greenbush's role as first an area crossed by important trade routes, later an agriculture produce supplier and recently a bedroom community for these urban centers.

North Greenbush is a part of the area comprising the Rensselaerswyck Patroonship established by Killian Van Rensselaer in 1628. Although there is record of settlement along the Hudson in what is now the city of Rensselaer, in the mid-17th century it's unlikely that there was any extensive settlement in the North Greenbush area until the second third of the 18th century.

The initial wave of settlement concentrated in the area closest to the Hudson River, west of what is now Bloomingrove Drive. With the end of the French and Indian War, the first period of North Greenbush area settlement began.

Blooming Grove (Defreestville), Bath-on Hudson (which later became part of the city of Rensselaer) and Wynantskill were the first communities in what became North Greenbush and remained the only significant ones until Snyders Lake sprang up in the early 20th century.

David M. DeFreest had an early inn at Blooming Grove about the time of the Revolution. A school was started in 1809 and the Blooming Grove Reformed Church was established in 1814. Blooming Grove was renamed Defreestville about 1830 to avoid confusion with a post office with the same name in Orange County, N.Y.

Wynantskill was a settlement at least by the late 18th century. The Wynantskill Reformed Church existed in the 1790s. Rapid growth in the settlement began in the late 19th century when trolley service provided convenient access to the Troy industrial center.

In 1931, a new Route 4 was built, which shifted some through-traffic off the winding residential Bloomingrove Drive. In the 1960s, the Patroon Island Bridge across the Hudson river was constructed as part of the Interstate 90 highway through the area that substantially improved access to the employment centers in the greater Albany area and linked the town to the interstate highway system.

The immediate future of North Greenbush appears to be dominated by the conversion of farmland to residential and commercial use. The construction of the Rensselaer Technology Park was an embryo for a significantly new and different path of development. Since 1983, 25 buildings have been developed for high-technology based businesses serving both regional and international markets.

As the town entered the 21st century, the issues of water districts and sewer projects were at the forefront. In 2005, the residents of Defreestville narrowly voted against the establishment of a village, which the proponents felt would allow localized control over development issues — especially at the Rt. 43-Rt. 4 interchange.