Highway Superintendent Pat Lucey and the Town of Amherst 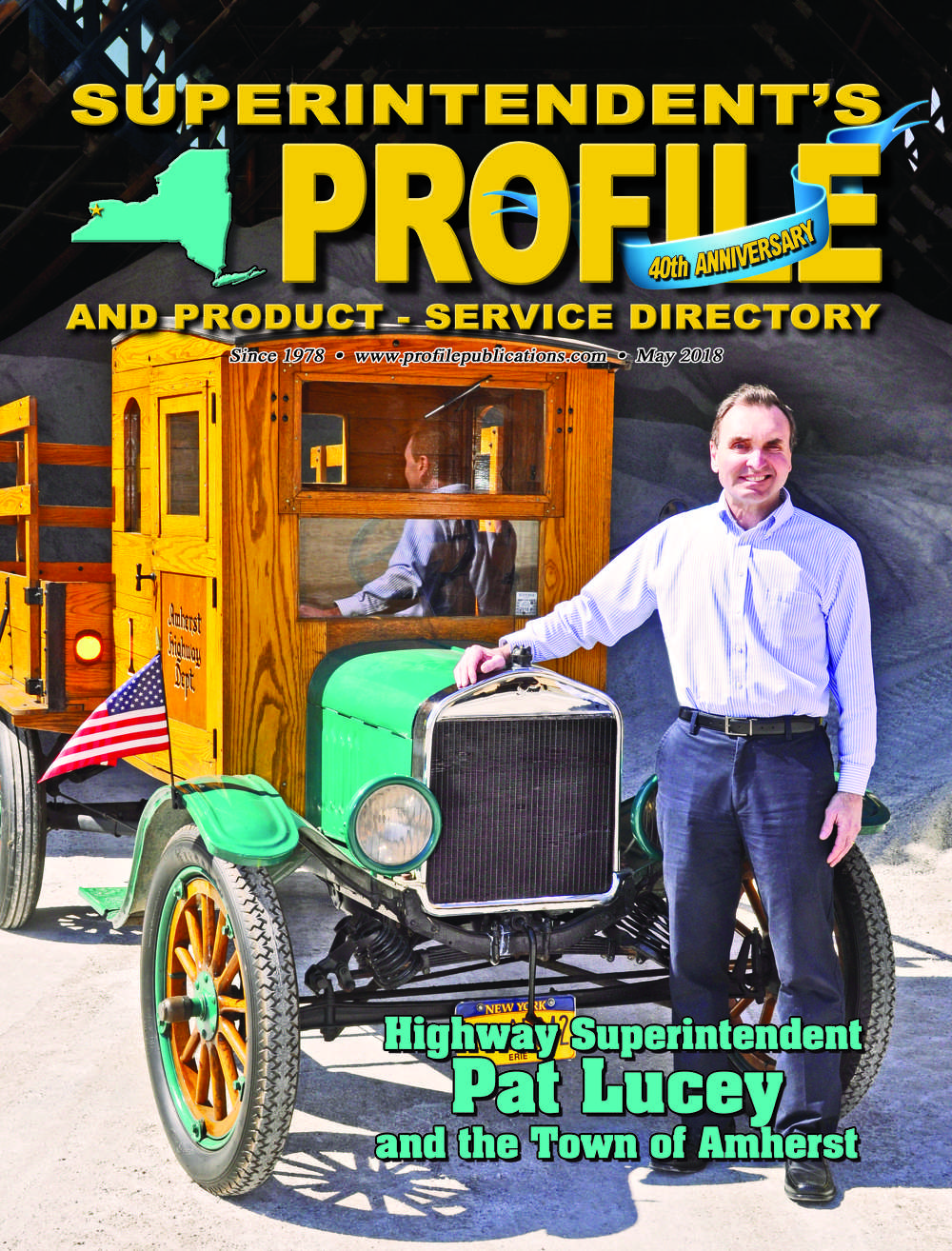 When it comes to running the Amherst Highway Department, the apple doesn't fall far from the tree. Twenty-one years after his father hung up his highway superintendent's hat, his son, Pat Lucey, took the oath of office.

“I got my B.A. from the University of Buffalo in legal studies,” he said. “I started as a laborer with the highway department in 1979. Shortly after, I was elevated to a motor equipment operator [truck driver]. I plowed and performed an assortment of other highway-related duties. I mainly worked the afternoon shift because I was going to school during the day.

“In 1986, I became an Amherst police officer, so I left the highway department. For the next 29.5 years, I was a member of the Amherst Police Department. For 11 of those years, I worked in the traffic division and became a certified Traffic Accident Reconstructionist. I learned how to determine the causes and effects of what happened in an accident. You start from the accident and work backwards. Was it speed? Alcohol? Was there an equipment defect? Road defect? It was interesting. My whole career was interesting to be quite honest. I loved every minute of it.”

Then things changed. Pat's father was voted out of office in 1995. Twenty years later, Pat decided to run for highway superintendent. Taking over the helm was a natural rite of passage.

“Obviously, I knew quite a bit about the highway department,” Pat said. “Not that I did a lot of the administrative work in my prior seven years, but I basically knew how to run the place. At least what it would take. I campaigned door to door. I won the election by 21 votes out of 21,000. I retired from the police department and took office in 2016.

“That's where I am today — running a department with 142 full-time workers. My day is eight hours behind a desk, answering the phone, sending e-mails, working on the computer, filling out vouchers. I still get itchy to plow snow, but I'm so bogged down with the administrative stuff it's hard to get away.” 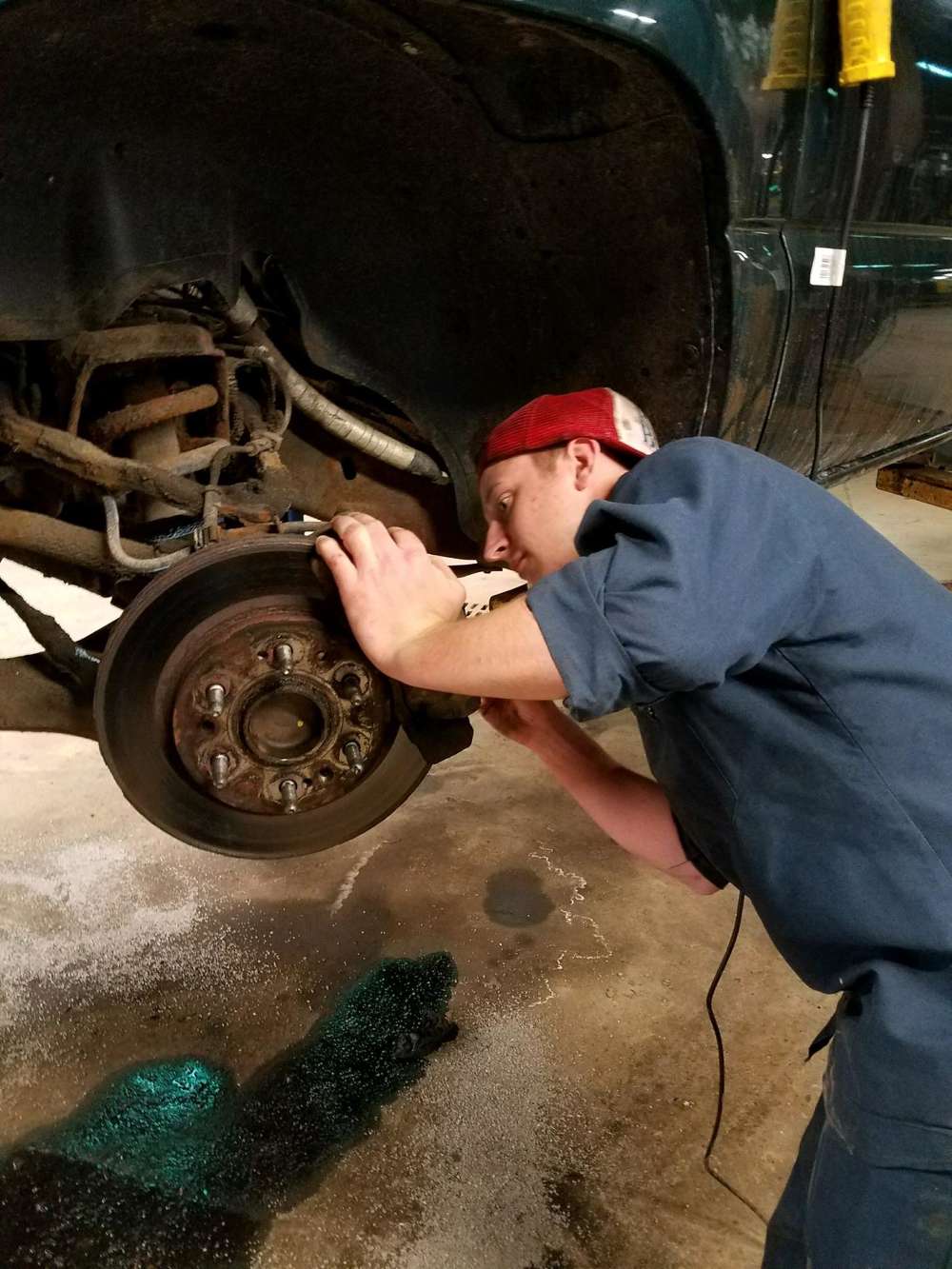 Pat married his wife, Joanne, in 1986, the same year he went to work for the police department. “No honeymoon that year. I was in the Police Academy.”

The couple has two daughters. Stephanie, 28, lives in Greece, N.Y., with her husband, Tim, and their son, Sammy. She works for a small tax firm part-time. Jenessa, 25, has her master's degree in social work.

These days, Pat enjoys spending time with his granddaughter and staying physically fit.

“I love running. I started when I became a police officer and never stopped. I don't run as fast or as far as I used to, but I still enjoy going out there and enjoying the peace.”

What is he looking forward to during his tenure?

“The most I can do is two terms. If I'm not successful in 2019, I'll go on with my life. I'll be grateful to the town of Amherst for the opportunity they gave me and I'll move on.” 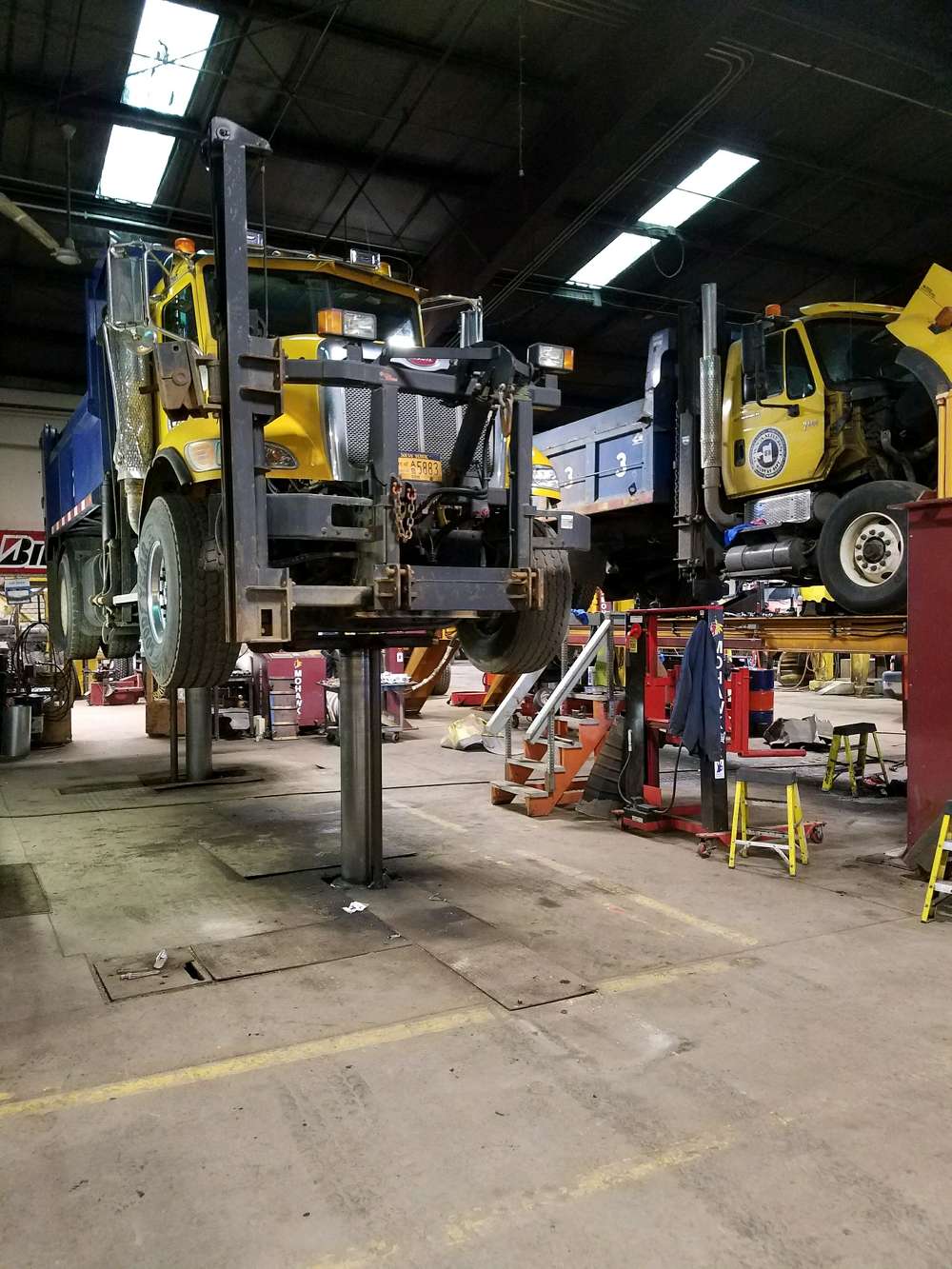 The Amherst highway department shop with two large trucks on lifts in for service.

“We also have a lunch room and a locker room,” Pat said. “I would like those refurbished. At least the locker room. The lockers have been here since 1975. There's a shower room that I'd like to refurbish, too. A lot of the infrastructure needs to be updated. It's been neglected for years. The town board has OK'd capital improvements projects worth hundreds of thousands of dollars, so I can move forward and get things done. In addition, we have a separate Parks Department building that's about a mile away. That's where I keep our mowers, snow blowers, the smaller stuff. This spring, we're going to have a new sign and signal shop attached to my existing building. The sign division maintains approximately 15,000 signs on roadways, bike trails and town park areas.”

As highway superintendent, Pat is responsible for maintaining the town's 327 lane miles of road and 40 county roads. All of them are paved. That translates into 47 plowing routes that take about six to eight hours to complete.

“I maintain and keep a 'Snow Book' beginning November 1 and ending March 31,” he said. “It includes temperature, conditions and any call-out of personnel for salting and/or snowplowing operations. We have three groups of 28 personnel that consist of MEOs, HEOs, mechanics, foremen and GCC in charge that rotate 'on-call' for salting operations during that period.

“We use 105 personnel for a 'full plow' operation,” he added. “The operation uses all the above personnel and our maintenance and laborer workforce as helper who controls the front and wing plows. We also have small plows for intersections of subdivisions of islands, dead end and parking lots.” 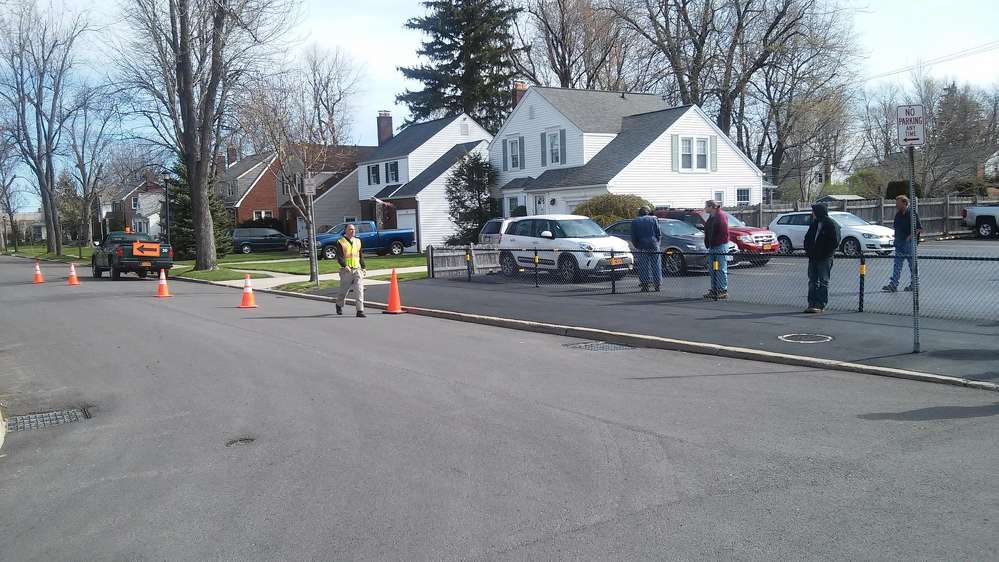 Under Pat's guidance, the Amherst highway department runs on a total operating budget of $31 million that includes salaries and benefits for employees and an annual CHIPS allocation of $507,000. He also receives $144,000 from PAVE-NY and $108,000 from Extreme Winter Recovery. To perform its duties, the town uses a fleet of 800 pieces of equipment that includes:

“We employ 20 or so mechanics,” Pat said. “I can't have enough [of them] because our equipment is so old. They take care of over 800 pieces. Seventy percent of those are over 11 years old. We also maintain other larger trucks for departments in the town and provide all the small-medium vehicle towing and metal fabrication.”

“I recently got in a new high lift we purchased last year. I'm used to getting in and turning the key. Now you get in and there's a joy stick. You press a button to start and stop. I was amazed the way it's done now. The technology is impressive. It would be great if I could buy it but we'd have to give up to get it.”

With increasingly higher price tags, how does Pat budget for new equipment?

“Last year, I worked on a budget. I was given $600,000 for 2017. It was good, but not great. I met with the supervisor who gave me a CIP (Capital Improvement Project) for $1.5 million to buy equipment. That helped. I'm hoping we'll get the same amount the next two years. Basically, the CIP money allows the town to bond the money over several years at a lower interest rate. We can pay for it over 10, 15, 20 years.”

Dealing with the politics of getting the necessary resources to do the job is one of the most frustrating parts of Pat's job.

“I'm not looking for anything for myself. I just want to be able to buy anything. I could write a book on how difficult that is. It shouldn't be that way. We're trying to follow state, General Municipal and all the procurement laws and the town's procedures, but the rules keep changing.”

When it's all said and done Pat wants to be remembered “for making the streets safer for the residents and those who commute in the town of Amherst. And that I cared enough to look into problems and if there was a dangerous situation, I did everything in my power to correct it.”

How the Town Began

By the mid-1600s, all of Western New York was a part of Seneca hunting grounds. One of their footpaths, the Great Iroquois Trail, is now Main Street from Clarence to Lake Erie. Another footpath that led to Fort Niagara, an important trading center, became North Forest Road. In 1797, Iroquois chiefs ceded most of their land in Western New York paving the way for settlement of the area. In 1798, the Holland Land Company bought about 4,000,000 acres and began surveying the land to sell it to settlers. In 1799, the Holland Land Company began selling 150-acre tracts of land to people who would open taverns along the main road, and a 300-acre lot with rich soil was sold to John Thomson and Benjamin Ellicott along what is now known as Ellicott Creek. In 1817, the first public school in Amherst was established in Williamsville. In 1818, New York State established the town of Amherst. It was named after Sir Jeffrey Amherst, an English lord who was Commander-in-Chief of the British troops in America from 1758-1763. A town government was formed in 1819, with Timothy S. Hopkins serving as the first elected town supervisor. At the first town board meeting, local residents appointed a town supervisor, a town clerk, three assessors, three commissioners of highways, two overseers of the poor, a tax collector, two constables, and fourteen path masters. The town was still sparsely populated and largely rural through the mid-1820s, with only one-tenth of the acreage improved and a population of 1,308. There were several businesses operating in the town including two gristmills, five sawmills, four textile operations, one iron works, five distilleries, and one ashery.

In 1825, the Erie Canal opened a transportation line east to west across the state and contributed significantly to the growth of Amherst. It opened up new markets for farmers, manufacturers, industry and businesses. German and French immigrants began settling the region in significant numbers. In the 1830s, Oziel Smith bought an unused mill, opened a water works, built the Eagle House, and bought a hops farm, jumpstarting the local economy. By 1850, there were seven grist mills, several saw mills, two forges, a tannery, a bedstead factory, a blacksmith, cooperages, a stave factory, lime kilns, a tailor shop, a paper mill, a broom factory, breweries, cabinet makers, a vinegar factory, two potteries, slaughterhouses, several taverns, churches and two schools.

At this time, Amherst had a population of about 3,500 people. The town's commercial operations continued to grow, with three hotels, lawyers, doctors, insurance agents, real estate agents, grocers, and specialized merchandise stores opening in the ensuing decades. In 1879, the “Amherst Bee” began publishing. Between 1860 and 1890 Main Street, Transit Road, North Forest Road, and Eggert Road were developed and settled.

In the late 19th century, an electric trolley, the “Toonerville,” connected Williamsville to the city of Buffalo, while improved roads and automobiles linked Amherst to Buffalo and Niagara Falls. Improved transportation increased population, which doubled between 1920 and 1930 from 6,286 to 13,181, as the hamlets of Amherst became the first trolley car suburbs of Buffalo. There were 73 major subdivisions approved by the town's building construction committee between 1923 and 1930. For example, Cleveland Park Terrace a subdivision of 1,300 homes priced from $8,000 to $40,000, began in 1926 and was completed just before the onset of the Great Depression. In 1929, the town became classified as a suburban town under new state laws, with a local government consisting of a supervisor and four council members. These improvements necessitated a larger local government, with a police force, fire companies, a new library, water authority, and a new town hall. By 1936, Amherst had 220 miles of federal, state, and county roads, the most of any town in Erie County. Amherst consists of the village of Williamsville, as well as the hamlets of Eggertsville, Getzville, Snyder, Swormville and East Amherst.

The development of the highway and interstate systems spurred postwar development. Large-scale residential development followed, consequently, while the population in 1940 was 19,356, by 1960 the population had increased to 62,837. This growth continued through the present day. The 2010 census showed the population of Amherst as 122,366. Residential development spread from Eggertsville, Snyder and Williamsville northward. This brought about commercial development catering to the new suburban population. This growth resulted in the establishments of the Williamsville Central School District in 1948, Sweet Home School District in 1950, alongside Amherst Central School District. New colleges in the town also were founded during this time, with Rosary Hill College (later Daemen) in 1948, Erie Community College North Campus in 1960, and SUNY University at Buffalo North Campus in the 1970s, which could accommodate more than 20,000 students. Suburban Amherst was firmly established as a center of regional commerce.