Highway Superintendent Nick Porcara and the Village of Laurel Hollow 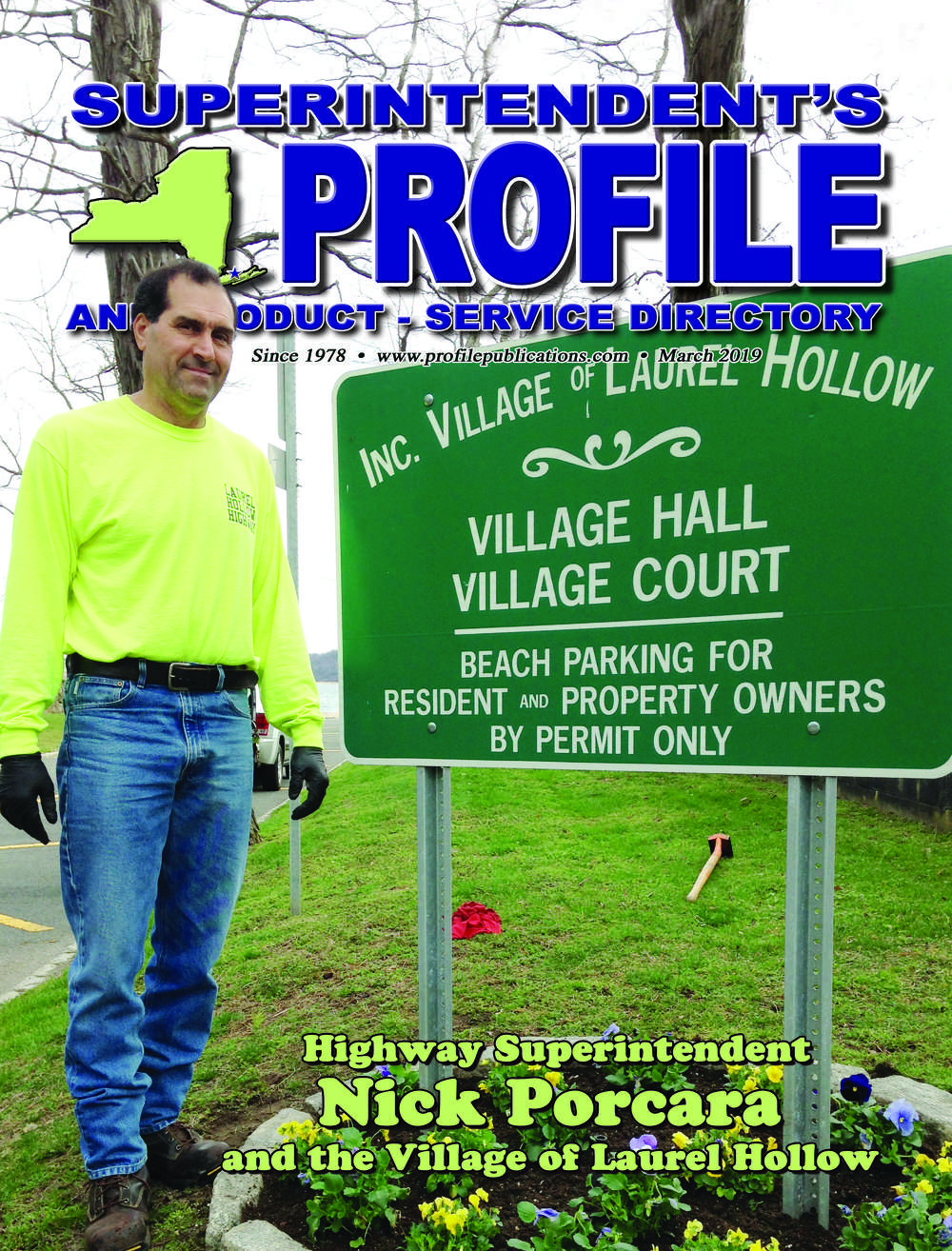 It doesn't take long to realize Nick Porcara means business. A man comfortable in his own skin, he handled himself with confidence and ease as he spoke of his journey to become highway superintendent of the village of Laurel Hollow.

Born in Brooklyn, Nick quickly moved to Port Washington, Long Island, when he was five. He graduated from Centereach High School in 1980.

“I tried college (Suffolk Community College) for one semester, but it wasn't for me. I had two uncles in the private sanitation business and I took a job with them at a young age. I watched and learned how to drive an old, steel-nosed autocar with an eight-speed rotary transmission. I worked the back. Long story short, I got my CDL license in 1983. I was driving everything from old Packards, roll-off trucks, six-wheel dump trucks and front-end loaders.

“I did private sanitation until 1994. Then, I bought my own tractor-trailer dump business. I hauled everything from salt and stone to topsoil, sand and mulch. Whatever it took to get the day done. I delivered rock salt from Staten Island all the way to Montauk. That's how I met the guys over here in Laurel Hollow. They were always calling the salt plant and asking for me to deliver.

“After 10 years of working six days a week and many long hours, I had enough. Laurel Hollow knew I sold my truck and one day I got a call from them saying there was an opening over there and would I be interested. I started working there as a laborer in 2004.”

“My boss retired in 2015. That's when Mayor Daniel De Vita interviewed me for the highway superintendent's position. I was hoping the mayor would give me a chance. I told him I was a working supervisor. I could improve the department by working smarter, not harder. And that's what we've been doing for the past three years.” 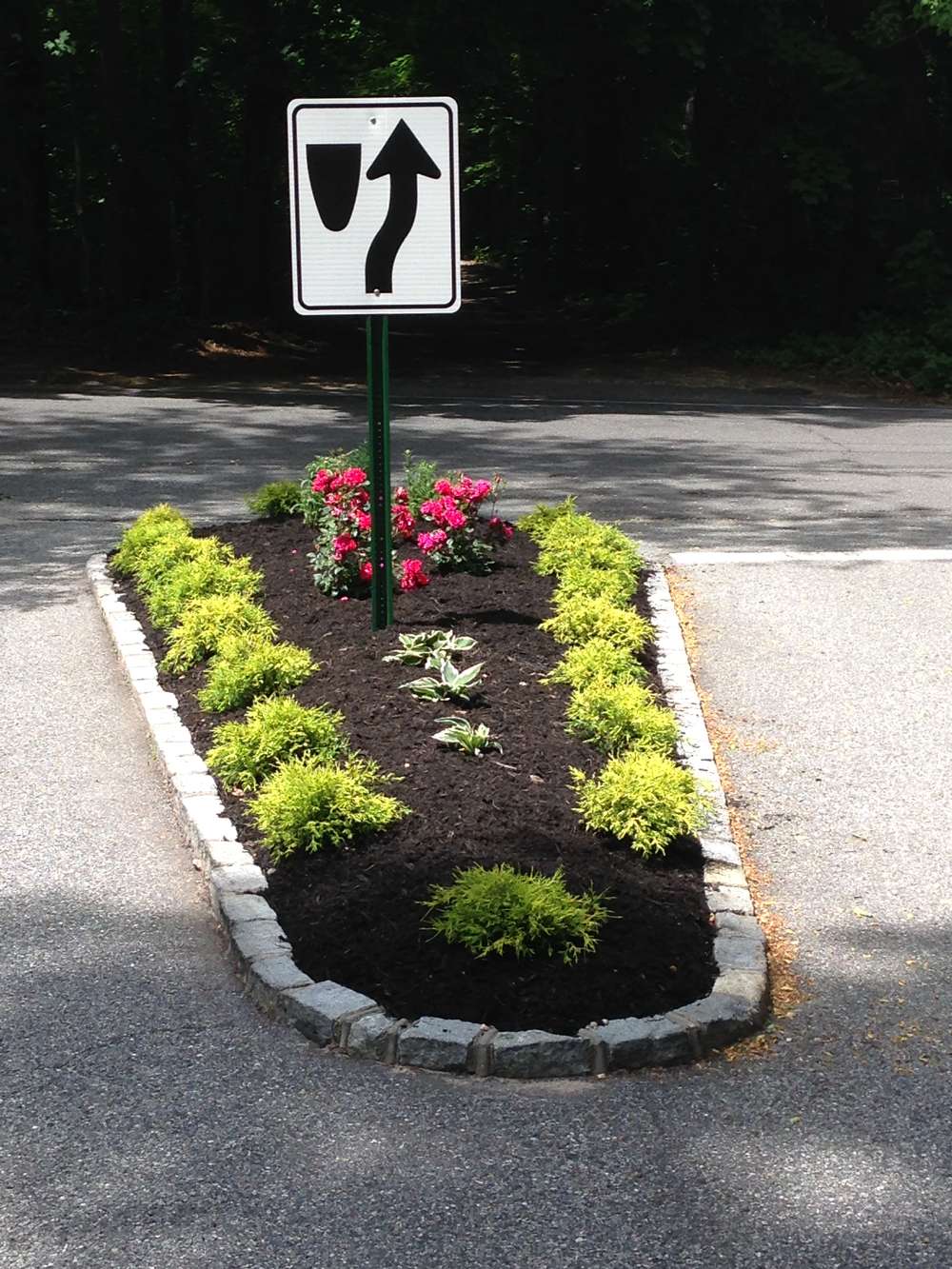 Nick is married to his best friend and wife of 34 years, Josephine, a paralegal for a local law firm. They have four sons. Nicholas, 32, and his wife, Jeanne Ann, are awaiting their first child any minute.

“It's a girl. Even better for my wife. She's been stuck with boys all these years.”

Nicholas is district manager for Walgreen's. Joseph, 29, is married to Gena and is an application developer for Northwell Health. Christopher, 28, is a Suffolk County police officer. Last but not least is Matthew, 24, a pharmacy student at St. John's University. “We're proud of all of them.”

While Josephine likes to travel, Nick prefers working on cars and trucks with his boys. So what happens when he retires?

“To be honest, not that I'm too happy about traveling and flying, but if you want to keep the wife happy, you travel. That's all I'm going to say,” he said, laughing. “We go here and there, but I think she wants to get on a plane and go really far here and there. That's why I'm not retiring.” 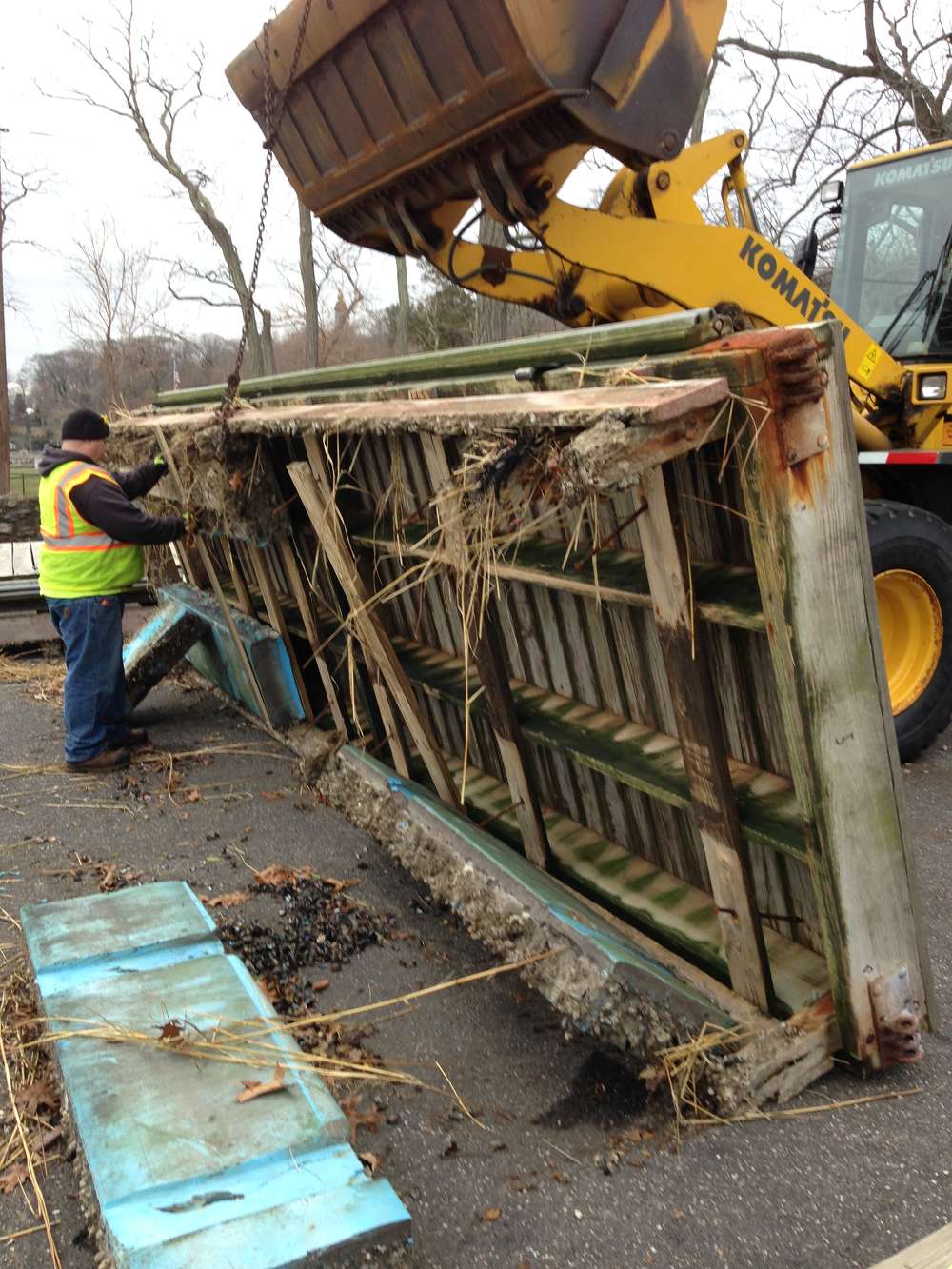 “The highway department [barn], as we call it, was built in 1905. It's in excellent shape with recently upgraded heat and LED lighting. We also painted the floors and bathroom. The office and lunch room are upstairs. The downstairs garage is where we park two 6-wheel dump/plow trucks, New Holland tractor, Komatsu payloader and a F-350 pick-up. We have a three-bay, 50-foot by 30-foot outside garage where we keep our 6-wheel International dump/plow truck, F-550 Stetco Catch Basin Cleaner, F-450 and Tarco leaf machine.”

The department also has a two-door 45-ft. x 25-ft. salt shed that holds approximately 320 tons of salt. One section holds straight salt, while the other has the Ice-B-Gone Liquid already mixed in. The Village Hall is located at Laurel Hollow beach overlooking Cold Spring Harbor. The hall and the Police Booth substation for the Oyster Bay Cove police were recently upgraded to LED lighting inside and out. In addition, the substation was fitted for solar panels on the roof.

All the roads in Laurel Hollow are the responsibility of Nick and his crew. They have a total of 25.25 lane miles of road, all of which are paved. There are three paving routes that take three to three-and-a-half hours to complete. That includes 16 cul-de-sacs, the Village Hall parking lot, walkways and steps and the Police Booth parking lots and gas pumps.

“Last winter, for the first time, we used a product called Ice-B-Gone-Magic. It's a liquid additive that's directly mixed with our road salt. It's brown in color, so when mixed with salt, you can tell immediately when it's a good mixture. It's environmentally friendly, will work up to -22º F and eliminates the need for sand.

“No sand means less debris gets washed into our catch basins and storm drains. It also benefits us with a less costly, quicker spring cleanup. We had to buy a pump and totes, but it was worth it. No more black ice. When we plow, it gets right down to the pavement. We use rubber cutting edges to try and save the roads. Last winter was nasty. We had two degrees in January and snow into the beginning of April, so it was a good test. It worked out well.”

Nick and his two full-time employees serve the city's 1,950 residents.

“Carlos Hernandez. has been here 10 years. He's a great mason among other things. He's the main reason why our catch basins, Belgian block curbing, stone gutters and cement tip ups all get repaired in-house. Dave Engelhardt has been here five years. He's unbelievable at repairing small engines—mowers, blowers, trimmers, chainsaws, generators, water pumps. He keeps a lot of it in-house too, so we don't have to send it out.”

Under Nick's watchful eye, the village of Laurel Hollow highway department functions on a total operating budget of $289,000 that includes employee salaries and benefits. He also receives $28,900 from PAVE-NY and $11,700 from Extreme Winter Recovery.

“You can roll those funds over to the following year but we've never done that.”

The department gets the job done using a modest fleet of equipment that includes:

“I made spreadsheets for every piece of equipment that includes date, mileage, engine hours and description of the maintenance or repair performed. I also keep a “Storm” book where I record the type of storm, amount of snow or downed trees, number of times plowed and salted and amount of salt used.”

Since his appointment, Nick and his crew have been hard at work.

“We cleared, landscaped and mulched three small islands. Beautified the Village Hall grounds, which included a sprinkler system and a re-seeding program. Planted trees, shrubs and flowers and installed a playground area and picnic benches. The public restrooms and lifeguard room were remodeled and the lunch and break rooms in our Police Booth were redone. We also purchased a Gingway Crack-Seal machine to help extend the life of the newer roads and a Barber Sandman machine to remove small rocks and debris from the beach. Used weekly during the season made a huge difference in the sand. We could never do these things before.”

Future projects include completing a two-phase $3 million road reconstruction program. Sixty percent of the roads in Laurel Hollow will be repaved and portions of the cement curbs will be replaced with Belgium Block curbs. New catch basins will be added where necessary.

When asked about the job, Nick admits, “It's rewarding, challenging and frustrating, all rolled into one. It's rewarding to see a project come to fruition and know that you did it. As for challenges, life wouldn't be fair without them. When you're out there in a snowstorm doing your section, you turn around and start again and it looks like you didn't even touch it. Three to six inches just fell. You have to sit back, relax and take a deep breath because when it finally stops snowing, it's going to be cleaned up and look perfect. Many times, with the heavy, wet snow, trees come down while you're plowing. You stop, get your chainsaw so you can remove cut trees while you're removing snow. That can be frustrating. You just take a deep breath and you'll get through it. We have chainsaws in our plow trucks. We cut, cut, cut and then remove and continue with the snow routes.”

Looking back, Nick recalls the worst day on the job.

“It was when Superstorm Sandy hit on October 29, 2012. I wasn't supervisor then. It was amazing how much damage that storm caused to Long Island. Hundreds of trees, telephone poles and wires were down. We were supposed to be getting our equipment ready for winter. Instead, it took us until Christmas to get the village back to normal. We had a mess at our homes, too. No power. No heat. No gasoline. That was a rough stretch for me and my men. Never want to experience that again. That date is engraved on my hard hat.”

Looking ahead, how would this highway superintendent like to be remembered?

“I'd like me and my crew to be remembered as hard-working guys who were always out there. We kept the village looking nice for the residents and made the residents proud to live here.”

Wrapping things up, Nick “would like to thank Mayor Daniel DeVita, Village Trustee Kevin Jusko and the other board members for their continuous help and support of the highway department. Trustee Jusko, in particular, worked hard to get us our F-550 Stetco Catch Basin Cleaner, Gingway Crack-Seal machine and a 2019 F-350, which is on order. I greatly appreciate all their hard work and efforts.”

About the Village of Laurel Hollow

Laurel Hollow is a village in the town of Oyster Bay in Nassau County. The population was 1,952 at the 2010 census. According to Bloomberg BusinessWeek, Laurel Hollow is the eight wealthiest town in America.

The settlement began around 1653 with purchase of land from the local natives. The village was incorporated in 1926 as “Lauralton,” but the name was changed to “Laurel Hollow” in 1935 to avoid confusion with a location in Queens County.

The famous Cold Spring Harbor Laboratory, is located in the village.

Points of interest include:

Laurel Hollow is located at (40.856991, -73.477008). The village is situated in Nassau County and creates a portion of Nassau's eastern border with Suffolk County. Hilly terrain predominates in the area, and the forests are mostly deciduous trees with a low canopy of laurel bushes that provide a low evergreen canopy. Route 25A passes through Laurel Hollow east-west.

According to the United States Census Bureau, the village has a total area of 3.1 square miles, of which 2.9 square miles is land and 0.2 square miles or 5.18 percent, is water.

Notable people with a Laurel Hollow connection include:

• John Lennon, member of The Beatles, owned a home with wife Yoko Ono in Laurel Hollow at the time of his death.

• Louis Comfort Tiffany, the artist and decorative designer whose glass vases, lamps and windows depict scenes inspired by the view from Laurelton Hall, his estate in Laurel Hollow, and three of whose stained glass windows are housed in St. John's Episcopal Church in Cold Spring Harbor.

• Jay Gould, leading American railroad developer and speculator. His success at business made him the ninth richest U.S. citizen in history. He built Cedar Knolls for his grandson Frank Gould.