Colleagues, Friends Remember Superintendent of Highways Bob Humiston of the Town of Argyle 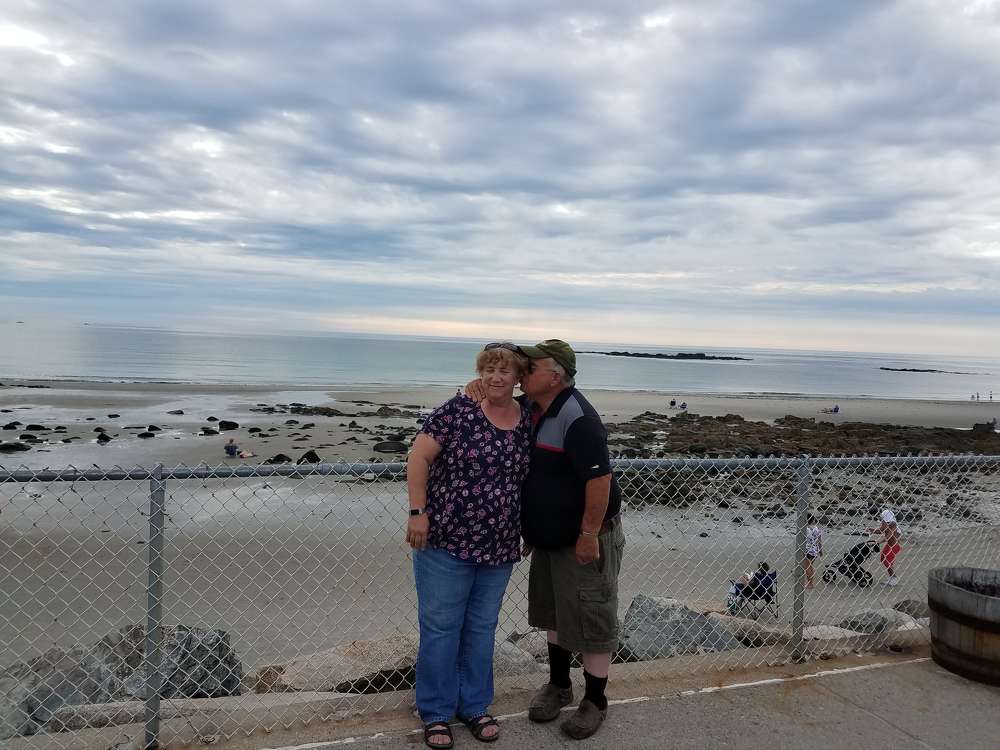 December 17, 2019. A day that will forever live in infamy for the residents of the town of Argyle, N.Y.

The day started out the same way it always did. Argyle Highway Superintendent Bob Humiston was having breakfast at The Auction Barn with some of his employees.

“Usually, we'd sit there and shoot the breeze for an extra five or 10 minutes but because it was snowing, Bob wanted to get back and get the roads cleared,” recalled Jason Jablonski, equipment operator for the town. “Once he saw that everybody was done, he put his money on the table, walked out the door and jumped in his truck.”

Then everything changed in an instant.

“I was in the passenger backseat. Our deputy superintendent [Jason Rozelle] was in the passenger front seat. Nathan Henry [another co-worker] was in the driver's side back seat with me. We were waiting for traffic when a girl lost control of her vehicle. I saw her fishtail once or twice before she dumped it into the ditch then went airborne and T-boned us. That's when I knew we were in trouble.

“When everything stopped, I thought, 'I'm not hurt. I must be dead.' I opened my eyes and looked around. I looked over to my left to check on Nathan [Henry]. He was looking at me. I asked if he was alright and he said, 'Yup. I'm okay.' I looked in the front seat and saw Bob. He was gone. The back window was smashed so I climbed out and went to check on Jason Rozell [deputy superintendent]. He wasn't responding. By the time I got out of the back window, the young lady was screaming and hollering. I told her to get away and call 911.

“Then I jumped out of the truck bed and went to check on Jason. He still wasn't responding, so I went into The Auction Barn and had them call 911. Then someone handed me a towel. I had a cut by my right eye on my temple. The adrenalin was pumping. I was just waiting for everyone to get there to help and get Jason out. Nathan was pinned under the car. He just came back this week. Jason's still out. He had a broken collarbone and nine ribs on the left side. He's hoping for March, but he still has to undergo physical therapy. He is up and around and in good spirits. I check on him once or twice a week. He's doing well.”

“I remember looking out the [diner] window. I said, 'Oh my God. This can't be good. That car is halfway through that pickup truck.' It was unbelievable. I knew who it was. We were just talking with him. We were having breakfast together. Bob said, 'I'll meet you back at the town barn' and I said, 'We'll be right up.' He never made it. A couple of the other guys were sitting with me and they went out and helped Jason Rozelle get out. He was strapped in there with a seatbelt. He was choking and couldn't breathe.”

Jablonski and Henry have returned to work. Rozelle suffered a broken collarbone and nine ribs on his left side.

“We don't know when he'll be back. He's hoping for March but he still has to go through physical therapy. He is up and around and in good spirits. I check on him once or twice a week. He's doing well,” said Jablonski.

Employees not involved in the accident were Willie Henry, Brian Dean, Chuck Doty and David DePew.

While the injured employees were being treated, crews from neighboring towns, including Hartford and Kingsbury, Washington County highway crews and the Fort Edward highway department worked together to help clear Argyle roads of snow as the town workers dealt with the tragedy.

“Bobby would have done the same. That's how he was.”

Determination and dedication describe Bob Humiston. He was devoted to his family, friends and the community.

He was logical, creative and intelligent. He treated people and those around him with respect and always did the right thing, even when it was difficult.

He was the salt of the earth.

Friends and family will tell you Bob's children and grandchildren were a big part of his life. He also was 100 percent committed to the town.

While the family and the town of Argyle are mourning the loss of their beloved Bob, they're also celebrating a life well lived.

Born on July 9, 1952, in Glens Falls, Bob was the son of the late Charles and Mildred (Nesler) Humiston. He graduated from Argyle High School in 1970, and on Nov. 2, 1974, he married Esther Potts at the Argyle Methodist Church.

Bob served as highway superintendent for the town of Argyle for 16 years and president of the Washington County Highway Association. He served on the Argyle Youth Commission board for more than 20 years; was a board member of the Baptist church; and coached various youth programs. He also was on the Argyle school board for 25 years.

“He loved everything about Argyle and this community,” said Jablonski. “There are thousands of stories of him doing some little thing. One time, a kid didn't have a glove for baseball so he and Esther bought one for him. Every year they'd host the annual picnic or banquet for the Little League. He'd have 50 or 60 kids running around their property. Other people would say, 'No thanks.' Not Bob and Esther. They'd do it and it would bring a smile to their faces every time. It's a devastating loss to the community, not just to his family.”

“I've known Bob since grade school. He's been a fixture in the community for almost his entire life. Not only was he a local farmer, he was always involved with youth athletics and the youth commission for over 20 years. He was the president of the commission and coached all kinds of teams. He did everything from working on building the athletic fields to cooking for the fund-raising breakfast.”

“During his tenure, Bob brought the purchasing and equipment program forward. He modernized the motor fleet and instituted a purchasing plan that established replacing equipment on a routine basis, not as emergencies. Argyle has almost 100 miles of road; half of them are paved. Therefore, the town uses large amounts of road sand. When the salt leaching from the stockpiles appeared to be escaping into the environment, Bob oversaw the building of a sand shed to protect the huge pile from the elements — an innovation that's being copied by other towns.

“He spent huge amounts of time checking the roads in our hilly, diverse town, finding spots that had iced and working incessantly to keep the school buses and other travelers safe. We often joked that if we could have given him a snowflake-zapping laser beam, he would have manned it 24 hours a day to keep anything from getting to his precious roads.”

“Our equipment was in terrible shape. Now we have a master plan and replacement schedules. The equipment is being replaced in a timely manner as opposed to worrying about money when there's a great emergency because something died.

“The other biggie is our sand barn. We have 100 miles of road in Argyle. Half of that isn't paved. So, we have a huge usage of road sand every year. We're also noticing that you have to mix some salt in with that to keep it from freezing up so you can actually use it in the winter. We saw it starting to leak out in the ditches and were concerned about the ground water. Under Bob's tutelage, we built an immense sand shed. Now all our sand is under cover. Constructing a building like that is a pretty big deal for a town this size. We had to be creative in our finances. Bring the sand in, stockpile it, and then mix it with salt. The Department of Environmental Conservation (DEC) is getting on people about salt leaking out of piles, particularly in the Adirondack Park. Other towns are coming to us wanting to know how we did it and financed it. It's an idea that's spreading that started under Bob's tenure.”

“Bobby was one of those guys who knew if he took care of his guys, his guys would take care of him,” said Jablonski. “He knew family was one of the most important things. If someone had a family emergency, or anything, no doubt he would make sure it was taken care of. Several times he'd call me when were out in a storm. Bobby would be listening to the local radio channel. This one time, he said, 'EMS called your grandparents' house. Go check it out. Make sure they're okay. That's the type of guy he was.”

“It's a great loss. He loved his wife and kids. He was proud of everything they did. When Bob told stories, he'd get all big chested when he talked about his boys and his grandkids playing ball. Sometimes the kids would have to wait at the office until their parents could pick them up. He'd look like a big papa bear with a little cub playing around. That was Bobby.”

“Being on the school board, if two people came in for a job interview — if they had equal qualifications — Bob would lean toward the Argyle resident,” said Ken Luskin, sales representative of Peckham Materials. “His thought was if you live here, pay taxes here, it should work in reverse. We should support them.”

In his free time, Bob enjoyed maintaining the family farm. He sold hay and grew vegetables that he sold at the local Farmer's Market. He and his wife loved traveling to Maine and Myrtle Beach. On his vacation, he like to swim in the ocean with his children and grandchildren. He also was a big deer hunter. Loved his yearly hunting trip to Pennsylvania with the Carrington family and his trips to Ithaca with the highway association.

“We know of him,” said Jablonski. “He'll stay in the position until the end of the year. I believe he'll be running in November. I was interested in the position if I could have done it to preserve Bob's legacy. I didn't want someone to come in and change everything. I didn't want a grenade to go off in the shop because we have a lot of good guys here. If that were to happen, all the work Bob and these guys did before would be for naught.”

Services for Bob Humiston were held at the Argyle Methodist Church.

According to Stanley Mattison, highway superintendent of the town of Greenwich, “It was impressive. About 31 trucks came from counties and towns all over the state to lead the procession to the cemetery. The church was packed. I'd say about 1,500 people attended the service. That's how much he was liked. Highway superintendents from the Washington County Association of Streets and Highways served as pall bearers and honor guards. I get emotional thinking about it.”