Highway Superintendent Rich Benjamin and the Town of Thompson 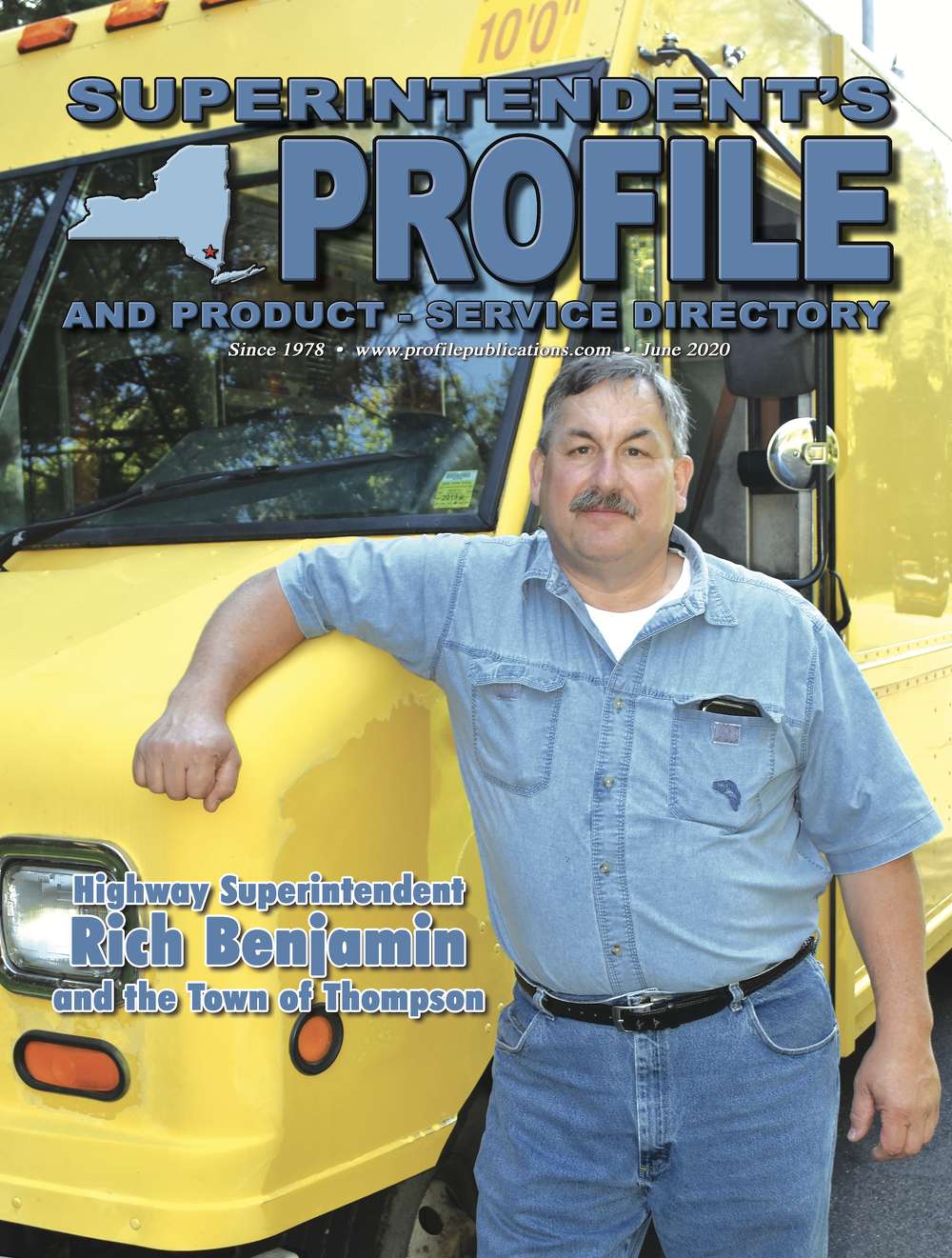 The town of Thompson, located approximately 60 miles north of New York City in what has historically been a vacation/recreation area of the Catskills, has seen both good and bad times.

For many years, the area had been booming with resorts such as the Concord Resort Hotel, Grossinger's Catskill Resort Hotel and Kutsher's Hotel and Country Club. These grand facilities drew top name entertainment and offered year-round activities such as skiing, golfing and horseback riding, to name a few. Tens of thousands of well-to-do visitors would travel from New York City to spend their summers in Sullivan County.

Following World War II, air travel and the interstate system made destination travel more in vogue, and the Catskills fell out of favor. The resorts were closed or closing and the area in general was feeling a lot of pain. The tax base was down significantly, and things were bleak.

In 1987, New York Mayor Ed Koch even proposed buying the Gibber Hotel in Kiamesha Lake to house the homeless.

This was the situation that faced Superintendent Rich Benjamin when he was elected into office in 2001.

The town's fleet, which was made up of primarily Oshkosh trucks dating from the 1970s, was in desperate need of replacing. Revenue was very hard to come by as the county did not share any of its sales tax revenue, so the only source of revenue for the town was property tax.

“From the beginning I leaned on a very experienced and talented deputy who has been here for 30 years, Dave Wells,” Rich said. “Dave learned the hard way because of the circumstances during the 90s how to stretch a buck. Even though circumstances have changed as far as funding for our highway department, we have tried to take the same principles and continue to apply them in decisions that we make moving forward with the improved funding that we now have available to us. 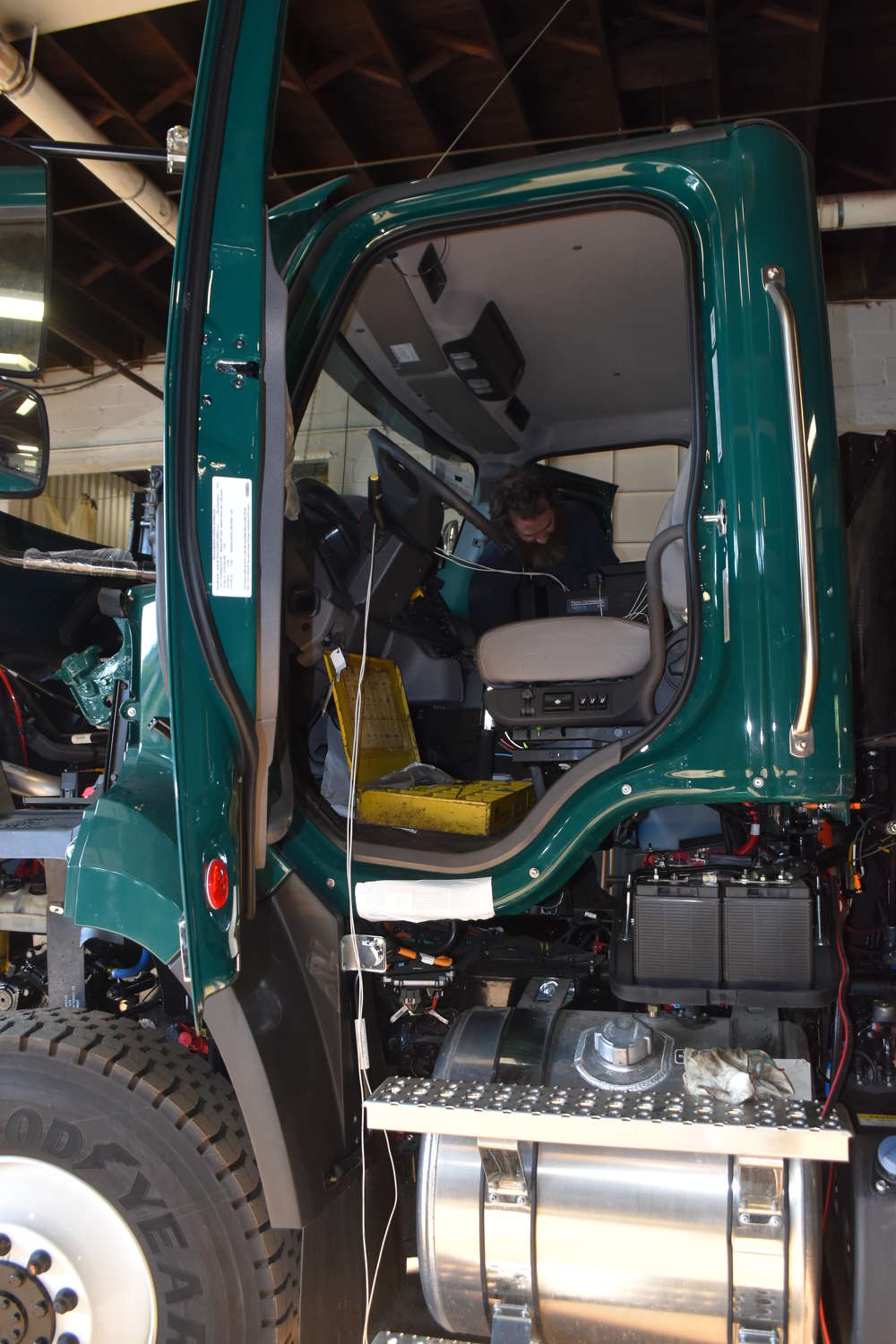 A newly delivered Freightliner truck purchased from Campbell Freightliner in Maybrook, N.Y., gets prepped as one of the town of Thompson skilled technicians installs hydraulic and electrical systems to operate the dump bodies and plows that are being installed.

“We take a very frugal approach to everything that we do. To streamline our fleet, we have been purchasing primarily Freightliner going forward, from Campbell Freightliner in Maybrook, N.Y. Unlike just about anyone else that I am aware of, we have been using the talents of our own crew and spec'ing and installing the truck bodies ourselves. Most recently stainless-steel Monroe truck bodies purchased from Hudson Truck & Trailer in Poughkeepsie, N.Y.”

It took a natural disaster to turn things around: significant floods hit the area on Rich's first year on the job, leading to an influx of funds from FEMA. This money not only allowed the town of Thompson's highway department to clean up the damage from the flood, but also helped fund replacing some aged infrastructure.

Gambling on a Casino

Until recently, residents of New York State had very little opportunity to engage in legalized gambling. One of the few opportunities was a harness track in Monticello, which had been in operation since 1958.

As the governor of New York State started to expand gambling opportunities in the state, Sullivan County and the town of Thompson were identified as a region that could benefit economically by this. A slots casino was opened at the harness track, which generated a tremendous amount of tax revenue for the state.

It was negotiated that $1.2 million a year would be funneled to the town of Thompson. 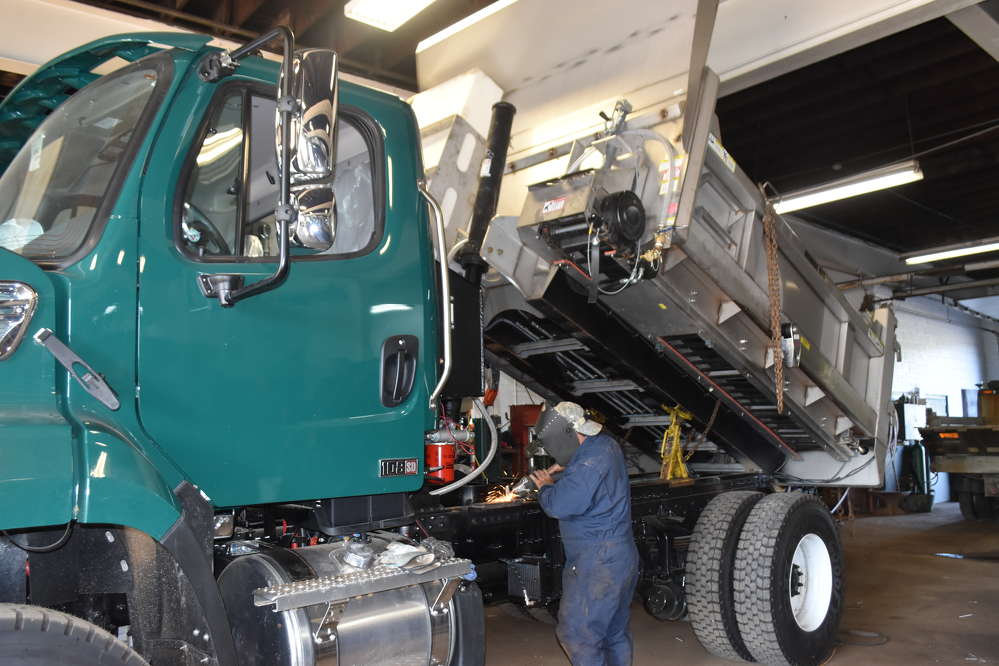 Unlike most highway departments, Superintendent Rich Benjamin made the decision to have his crew do their own truck body installs to save money and to have tighter control of their in-service schedules.

A few years later, in addition to slots at the racetrack, an agreement was made allowing the construction of a $600 million major resort hotel and casino called Resorts World Catskill. Upon the completion, a new deal was struck, which has resulted in shared revenues that exceed $200,000 a month going to the town.

The combined tax revenue from these facilities not only allowed the town to cut resident's property taxes, but also to make major reinvestments into the town's infrastructure and into the equipment fleet of the town highway department.

Rich is particularly proud of the development of a road district around the new casino.

“The casino is massive and requires a considerable infrastructure coming in and out,” he said. “It has many different properties including golf courses and an indoor and outdoor swim park.”

The casino isn't a “license to print money” though, according to Rich, who stated that the local casino appears to be losing millions of dollars a year.

“We cannot count on their cashflow continuing to be our source of revenue forever. We therefore still make some very conservative decisions. For instance … our Gradall we purchased from Sullivan County when they were ready to buy a new one. We were able to purchase this Gradall directly from the county because there is no bid process when one government agency sells to another government agency. We have 12 main plow trucks, so we have chosen not to have all of them purchased new. Several of our trucks have been purchased used from other municipalities. There are trucks in our fleet that were purchased from Clifton Park, N.Y., and Manlius, N.Y., which we bought online through Auctions International. We do all of our maintenance and repairs in house, including engine work, welding and hydraulic repairs.” 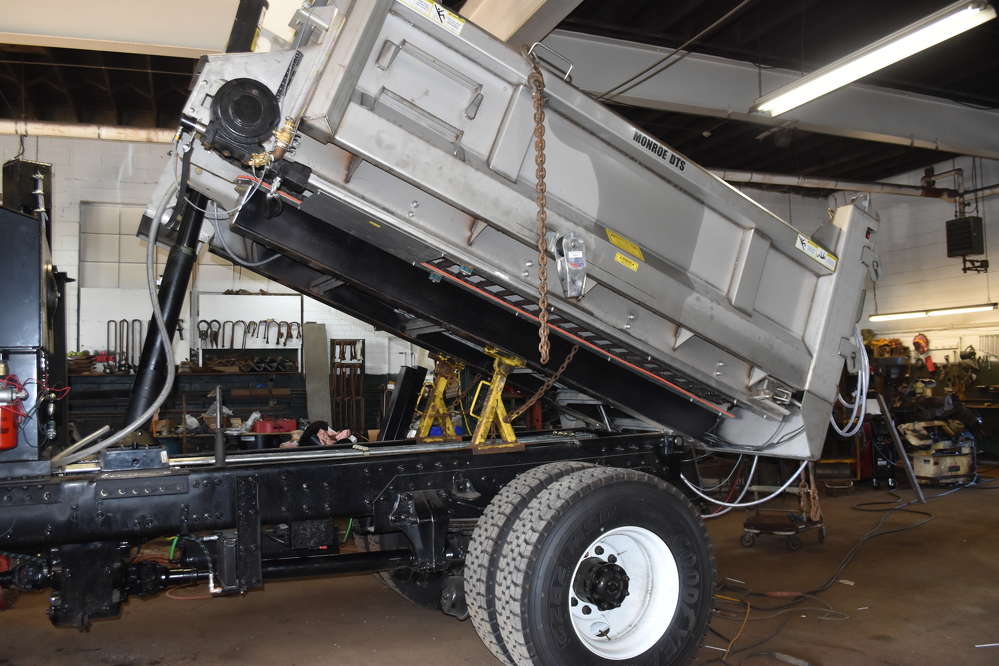 The highway department also has implemented a program of pre-treating roads.

“Years ago, we switched to using straight salt and pre-wetted calcium chloride for de-icing our roads and very little sand, so there is a lot less sand plugging up our ditches. We also do a lot less sweeping than we used to do.

This technology comes from Reed Systems in Ellenville, N.Y.

“Jim Reed is the innovator of this process. They are a local company; he is a local guy and a local expert. So, we have standardized with Reed Equipment for our liquid applications. Jim Dean from the town of Orangetown in Rockland County, who is a longtime highway superintendent, was one of the first in the area to use this approach. Jim came to Sullivan County and gave us a presentation on how to reduce salt use."

The town of Thompson is a big believer in pavement preservation.

“We want to keep our roads in good shape and use our budget dollars as wisely as possible,” Rich said. “A number of years ago, we started doing our own asphalt crack filling. We found that crack filling is a great tool in extending the life of our road surfaces and that we could do it ourselves very economically. Any crack in the surface of asphalt allows water to get below the surface; eventually winter comes, it freezes and thaws, it expands and does significant damage to the road. It just makes sense to be very aggressive about crack filling.

“When it comes to resurfacing, we use the FiberMat process, which is like a double-sealed coat with a layer of fiberglass mat inserted between them. You spray the road with oil, a sheet of fiberglass mat, and then another coat of oil, and then add a coating of stone for your wear surface. This keeps cracks in the asphalt from making it to the surface. This process more than doubles the life expectancy of our road surfaces versus traditional chip sealing.

“Another process that we use is called NovaChip. With this process a layer of emulsion is put down and then covered with a special hot mix. You're not adding much thickness, you're adding a lot of curb appeal and it is a long-lasting finish.”

The town of Thompson highway department does all its own paving. Its goal is to do total reconstruction on at least one road a year with a Blaw-Knox paver that it purchased used several years ago. There are two blacktop asphalt plants right in the township, so there is a reliable supply of good product with very low hauling costs.

One of the reasons it opted to purchase its own paver was to maintain independence from outside contractors.

“Too many times we had projects for hot mix that needed to be done and no one was available to do them that fit our time schedule,” Rich said. “We pave about 80 hours a year, so we are not putting a ton of hours on our paver. We keep the paver well maintained. Thus far, it has proven to be economical for us.”

Working on all these projects is the town of Tompson's highway department, which has 21 full-time crew members and four to seven part-time crew members. The crew's normal operating hours are from 7 a.m. to 3:30 p.m. and summer hours are from 6 a.m. to 4:30 p.m. According to Rich, one of the biggest challenges is hiring new employees.

“Typically, we hire summer help. If they turn out to be good workers, we help them get their CDL and then bring them on full time. But, to give you an example, we've had an opening for a mechanic for two years. We lost our last mechanic when he took another position that he judged to be a better opportunity as a prison guard.”

A Highway Superintendent… and More

In addition to serving as highway superintendent, Rich is very involved in the NYSAOTSOH and also is the secretary and treasurer of the Sullivan County Highway Superintendents Association.

“I have made it a point to go to Albany every year with the Association for Advocacy Day to ensure that every town continues to get their CHIPS money. I have really enjoyed serving on the executive committee. They are a great group of people who are extremely committed to looking out for their members. The members have so much knowledge to share. I know that I would have missed out if I had not been a part of this experience.

“Whether a highway superintendent of a very large department or very small, each is trying to get the same job done with different resources. I am honored and looking forward to serving as president in 2022. We all care greatly about our community and are committed to helping each other out.

“I see the lobbying efforts of the NYSAOTSOH pay off. In 2019, the state was looking at some across-the-board funding cuts that would have cost our township $65,000. That's our township alone. The NYSAOTSOH efforts were responsible for getting those funds put back in place statewide.”

Prior to being elected superintendent, Rich owned his own auto mechanic and towing business. He felt confident his experience in owning his own business and management skills that he developed over the years had given him the tools he would need to improve the overall efficiencies in the town of Thompson highway department and result in better roads for the residents. He also leaned on his brother-in-law, Dan Hogue, supervisor of the town of Forestburgh, as a mentor.

Rich's current term expires in 2021. He hopes to serve one additional term before retiring at the age of 65. Until then, he's making the most of every day.

“I love all of the job. I enjoy serving the community. These are great people to work for. It has been great to see the fruits of our department's labor. As the roads get better and our equipment resources improve those are all things that we can look at with pride.”

And when he does retire?

“My wife, Lori, and I are big NASCAR fans. Our retirement dream is to visit and camp at every NASCAR track in the country.” P