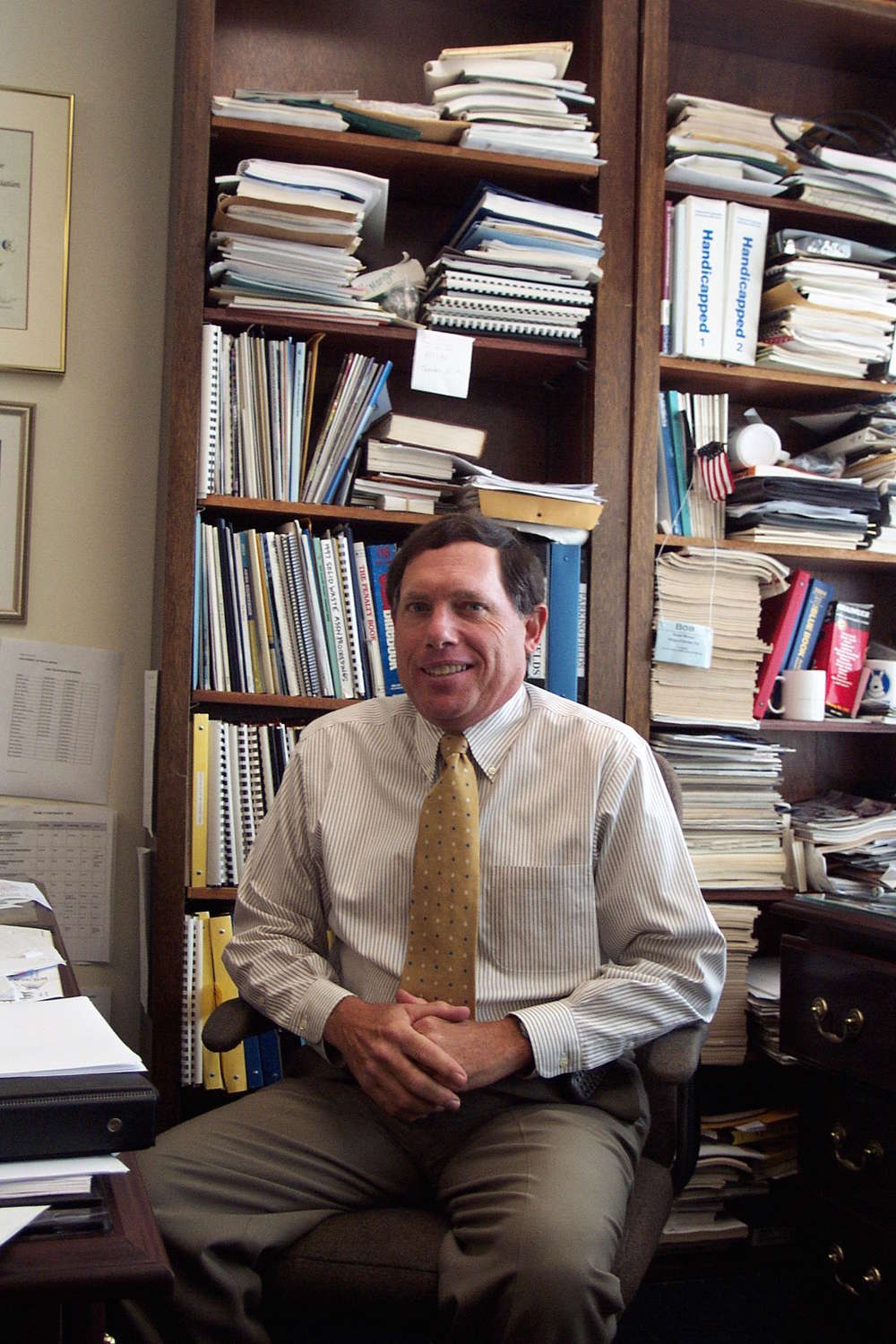 The Village of Garden City’s name is reflected in its streets, which are neatly lined in purple, red and yellow flowers and covered by a canopy of trees. Along Franklin Avenue (what some call the 5th Avenue of Long Island), the street lamps complement the park benches and storefront awnings; the sidewalk flower boxes coordinate with the plants located in the public sitting areas. The abundance of trees decorating the streets gives the town the healthy, vibrant feel of the quintessential American community.

“Garden City prides itself in that it is one of the most desirable places to live on Long Island,” explained Robert J. Mangan, who has been Garden City’s director of public works for the past 12 years.

One of America’s earliest planned communities, the town, located in Nassau County on Long Island, was developed in the late 1800s with wide avenues, a handsome large hotel on a 30-acre park and its own railroad branch line. It was also made a garden spot, with nursery trees and shrubs planted throughout the Village, which is now home to nearly 22,000 residents with the base price for a house hovering around $500,000.

“People move here, and with high property values they expect great services and we try to provide that,” said Mangan, whose 135-member staff works around-the-clock to provide first-rate service to its residents.

“If somebody calls up, it’s not ‘we’ll get to it.’ We do our best to send somebody out that day to handle the problem —whether it’s sanitation, water, sewers, trees, leaves or snow removal. For the most part, the residents are appreciative of the efforts made by the Department of Public Works on their behalf.” 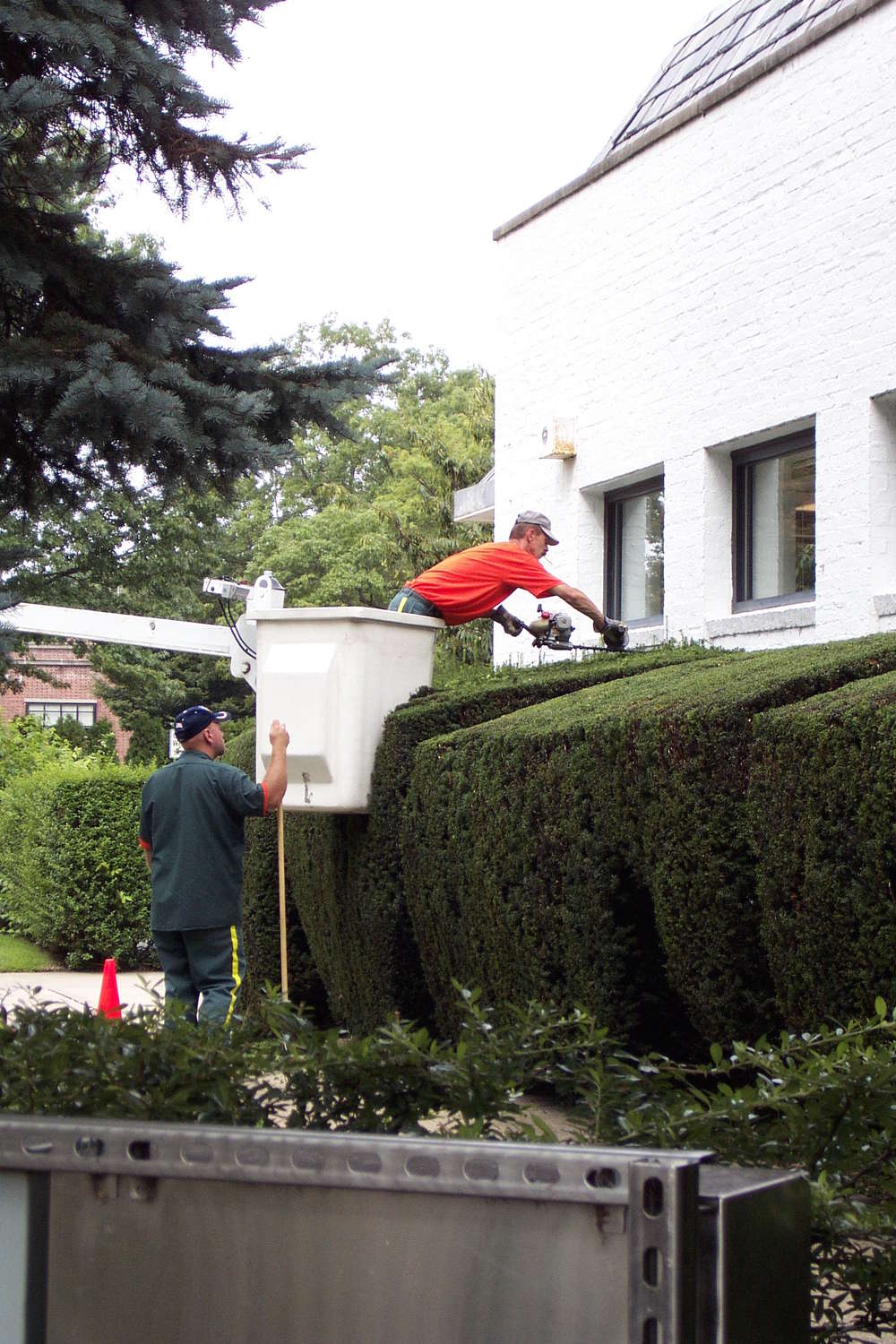 Around 7:30 every morning, DPW’s supervisors arrive at the Village yard to dispatch the daily crews. They then proceed to Village Hall, where the department’s main offices are located, to pick up any requests that may have accumulated since the previous day — the ones that didn’t come across their two-way walkie-talkies.

“If anything has come up, say a resident has a problem with her back-door garbage pickup, [the crews] will pick that up and get right out there to try to address it,” said Mangan.

Back-door garbage collection, in which the sanitation department collects garbage and recyclables from the back yard or door, is just one example of the close relationship the department has with its residents. Another example is leaf collection from the streets.

“The residents just put their leaves out front and the crews will come and pick them up,” explained Mangan. “It usually takes about two weeks to get through the Village, but we attack it like a snowstorm. We have 30 people out doing leaf removal from mid-October to the third week in December. We schedule seven overtime days — it’s our employees’ least favorite time of the year.”

Garden City’s DPW has a composting facility in the back of its yard, where the department recycles the leaves into mulch. It is then made available free to residents who want to take it and use it as topsoil. The mulch also is made available to landscapers as well as neighboring municipalities. According to Mangan, Garden City has also been a leader in the region in trying to address environmental issues, “and the leaf recycling program has been a model for more than 50 years.”

Mangan's department also handles all the snow removal for the town's 73 miles of roads and thousands of parking spots. “Our Highway General Supervisor Bill Keahon and his assistant, Fred Sylvia, do a great job with our snow removal program. Everyone is involved with snow removal including parks, water and sewer, sanitation and recycling,” he said. 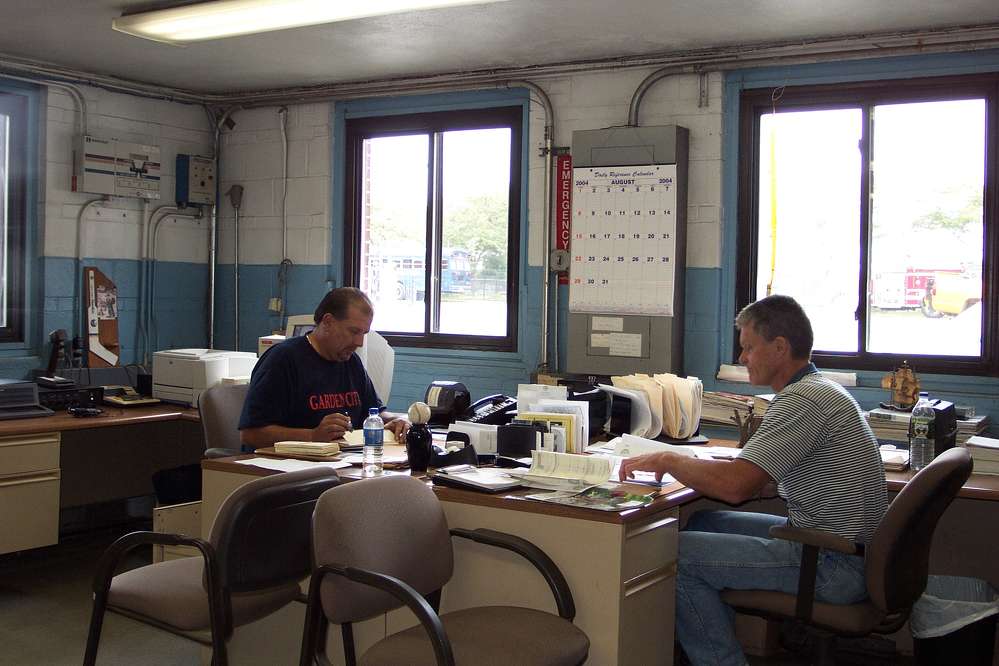 Another aspect of the DPW’s responsibility is the sidewalk program, which is coordinated by the department’s construction inspector, Domenick Stanco. “We do an annual inspection of the sidewalks and the engineering then bids out a sidewalk replacement contract each year. If the residents have a defective sidewalk, they may utilize the services of our contractor to get the repairs done and they are billed accordingly,” Mangan added.

Once the snow thaws, there are, of course, potholes to fill and roads to fix. DPW completes all base repairs on the road and gets them ready for the overlay contractor. “We put out a contract for the paving once the base repair is completed,” explained Mangan. “We do try to fill potholes the same day there is a complaint.”

Keeping up the infrastructure and providing good customer service can be the most challenging aspects of the job, said Mangan. But, he added, the best part of the job is solving a problem for a resident to their satisfaction.

“For example,” he said, “there was a [sewer] collapse in the street and we got out there right away … we had a contractor on board delivering shoring immediately. We had a mini-tornado in ’97 or ’98, and we were out there right away with our tree crews. If a resident loses water, we’ll hook them up house-to-house if we have to so they can stay in their home.”

Mangan added that because Garden City’s water, which is pumped from wells, has been “under attack” from volatile chemicals, the department has had to aggressively treat the water, to remove the contaminants. The department is currently seeking reimbursement from the federal government and the state of New York for a number of Superfund sites outside the village that have caused the contamination.

“If you have dry cleaning establishments or airfields or some businesses that dump chemicals into the ground, [the chemicals] eventually find their way to the water wells and you have to treat the water,” explained Mangan. “So we provide treatment at five well fields throughout the Village. We’re able to get the chemicals out, but it’s a big challenge to make sure we’re staying on the cutting edge of technology to get it all done.”

A few years ago, Garden City’s DPW started using a Supervisory Control and Data Acquisition (SCADA) system, which allows the staff to monitor its nine water wells as well as control them from a laptop. At the “central command” in the water department, all the wells are run from a number of computer stations. DPW can start and stop treatments from that location or just monitor system pressure. As part of the department’s disaster plan, a laptop can be used to do the same thing from remote locations.

The latest technology is also in use outside of Garden City’s water department. In the late 1990s, the DPW purchased a GIS system, in which the entire Village was “digitized,” allowing viewers to look at the town in layers — water, sewer, curbs, sidewalks, drain lines, electric and street lighting. Additionally, all of Garden City's nearly 20,000 trees can be viewed through the GIS system, which is updated every year.

With the name Garden City, it comes as no surprise that the Village is one of the nation’s tree cities. “We plant between 300 and 400 trees every year. We take down about 100, and we prune about another 300. We are Garden City — we want flowers and trees,” Mangan said.

This couldn’t be more evident than in the DPW’s recent revitalization of Franklin Avenue, a $3-million streetscape beautification project that was undertaken in 2001 to revitalize and return “a sense of identity” to the street, which is considered to be the Village’s crossroad.

Although Garden City enjoyed economic prosperity in its business district in the late 1970s and early 1980s, the proliferation of regional malls and a changing corporate environment negatively impacted downtown retail.

“We replaced the sidewalks,” explained Mangan. “We transformed the whole area into greenery. We installed new benches, new refuse containers and a gazebo as well as gardens and a irrigation system.” The DPW also added new street lamps, bus shelters, a fountain and a street clock. The project was an American City Magazine 2000 Award Winner in its American Crown Community competition.

With the improvements, comes more work for Garden City’s DPW. “It just seems as we make it more attractive, we just give ourselves more and more work,” said Mangan. “And that’s been the challenge — doing more with the same size staff.”

Mangan has a staff that includes engineers, technicians, draftspersons, mechanics as well as sanitation, streets, and water and sewer crews.

“We are able to design a lot of projects ourselves,” he explained. “Although, for large or technical projects, like a water well or treatment, we utilize a consultant. The way the chain-of-command is set up, we’re able to directly deal with the residents as well. We have the department broken up into a superintendent of water and sewer, Frank Koch; a village engineer Chris Markin; a deputy superintendent of public works and village engineer, Dave O’Brian, who manages the yard. So I delegate to these guys and everything just rolls down the chain of command.”

He noted that the DPW staff is encouraged to seek more cost effective ways to provide the same or improved services.

Garden City’s DPW is career-oriented, said Mangan. “Most of our people come here and they end up spending their careers here or they go someplace for a higher position. But we don’t lose too many people. We have fathers working with sons.”

The department has a full shop with eight mechanics and two supervising mechanics who maintain the fire and police department vehicles as well as the entire public works equipment fleet — which numbers more than 100. Mangan noted that preventative maintenance is critical to ensuring the fleet is ready at any time it is needed.

DPW’s equipment and vehicle fleet is something that Mangan and others in the department are very proud of. “We update our fleet regularly,” he said. “We try to turn over our equipment before the major repairs have to be done.”

In many respects, the Village is pretty self-sufficient. The department runs on a pay-as-you-go capital program.

“In January/February we do our budgets for the fiscal year, which runs from June to May, explained Mangan. “We do a presentation before the four property associations in Garden City. We make proposals on the capital projects for the year. We’ll fund them through the tax rate, which stops us from having to go out for bonding or rely on outside funding.”

Large projects exceeding $1 million, he said, will often be bonded. “The Village is very self-sufficient in that we have our own police and fire departments. We have all of our own services here and the Village Board of Trustees is very supportive of all our efforts,” Mangan said. “Village Administrator Robert L. Schoelle provides a great working environment for all the employees in the Village.” P