Superintendent of Highways Dave Goodwin and the Town of Clarkson 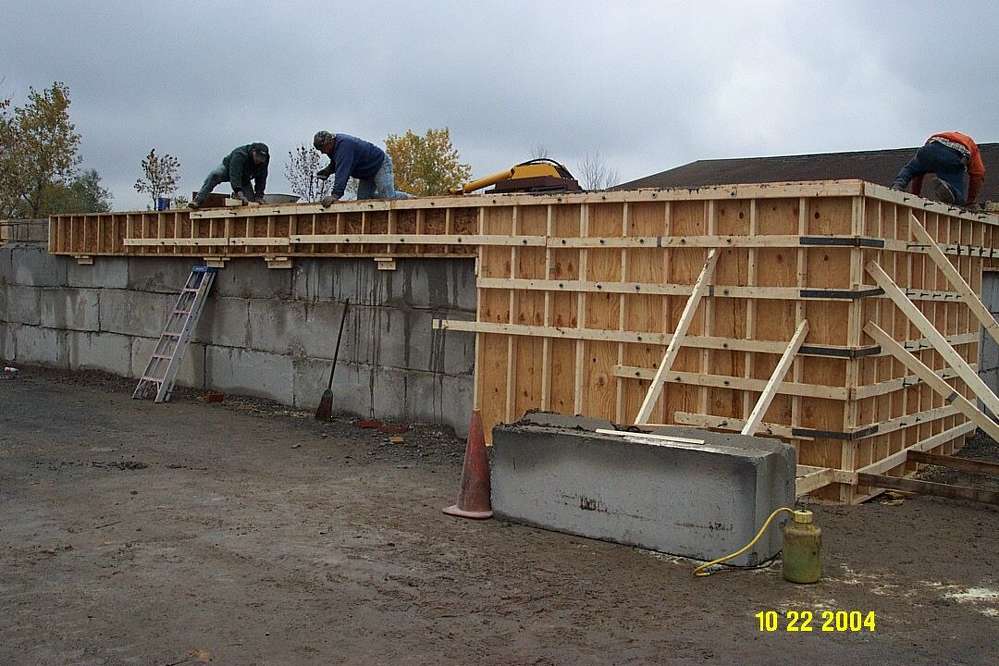 It probably helps to grow up in a family where middle-of-the-nighttime phone calls heralding disasters including broken water lines, power outages, slippery roads, noxious weeds, crumpled mailboxes and other disasters are common occurrences.

Dave Goodwin, Clarkson’s superintendent of highways, is a 37-year veteran, having highway experience in Clarkson and before that, the Town of Greece. He began doing highway work right out of high school, and he describes his role models, his father and his grandfather, as both being “great highway guys.”

Goodwin has managed the Clarkson Highway Department effectively enough to also have created a new court house, a new firehouse, a new park lodge, two parks, and 72,000 ft. of public water and an 8,000-ft.-long new sewer line, plus three new roads and sidewalks, in addition to the department’s year-round duties.

“I grew up in what was an early farm family in the Town of Greece [approximately 12 mi. east of Clarkson],” Goodwin said. “My grandfather was a state highway foreman and my father was a New York State Thruway foreman,” he added. Talk about knowing the history of every highway and byway in town.

Even more surprising, is that Goodwin inherited his present position from another third-generation “Highway guy.” Gerald Zastrow was a well-liked highway superintendent in Clarkson whose father, Leon, also was highway superintendent for 30 years. Gerald’s grandfather Herman actually began the working-for-the-highway family tradition in 1917 when Herman was elected to the post in Clarkson.

One of Leon’s favorite snowstorm stories is about the legendary storm of 1971. Leon had to shovel a driveway for a woman in labor, and then he had to shovel a path into Lakeside Memorial’s emergency entrance so that the ambulance could get through. A few weeks later he received a card from the mother thanking him. She said she delivered the baby five minutes after he helped her get through the blizzard and into the hospital.

One of Goodwin’s stories also involves a family in crisis — but in this case the family was his. The Monroe County Water Authority is now in charge of breaks in the water line, but at the time of Goodwin’s daughter’s wedding a few years ago, it was Dave and the boys who worked all night and into the morning hours to bring a water line break under control.

About walking his daughter down the aisle of the chapel later that next day, he said, “I was a tired buckaroo.”

Goodwin moved to Clarkson when he purchased 17 rural acres. He built his home from, “The hole in the ground to the final shingle on the roof.” After approximately 20 years in the Highway Department in the Town of Greece, Goodwin threw his hat into the ring when the highway supervisor of Clarkson job became vacant 17 years ago. He has pretty much run unopposed for the office ever since. “We do a good job,” he said with a certain amount of modest confidence.

Goodwin and his wife, Sherry, and their daughters, Renee and Jennifer, enjoy outdoor lifestyles. Goodwin loves to ski in the Colorado Rocky Mountains and fly an airplane he shares with two friends. The family barn has his daughter’s horses in it. Sherry’s home-trained Border collie has recently won a national agility competition out of state.

Goodwin now has a four-year term, which he feels is much better than the previously held two-year term because it seemed he was always running for office. In a town this small, “running for office” means going door to door to campaign with other candidates. He said, “People always tell me that taxes are too high. I want to explain that only a real small portion of town taxes support the Highway Department. School taxes are approximately two-thirds, half of that is County, and half of that is town tax.”

Part of his department’s mission is, “To aggressively increase the highway revenues, which have stabilized the tax rate and enabled the purchase of highway equipment at little or no expense to the taxpayers.” They do this by multi-tasking beyond the scope of a more traditional department dedicated to highways alone.

Goodwin said that his department is built to handle the town responsibilities as well as to do work contracted with the county and the state. 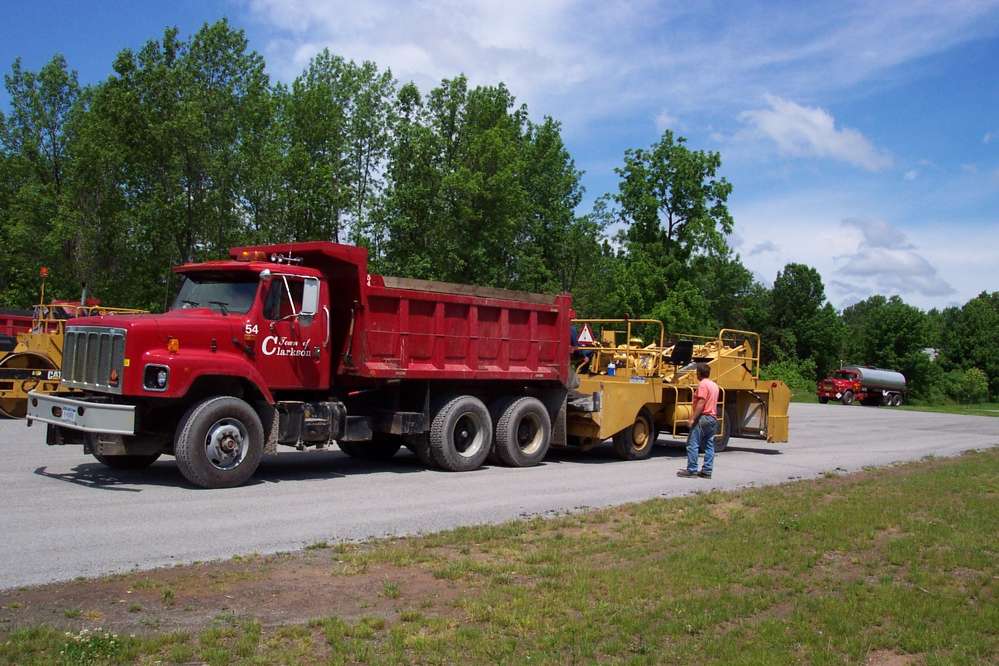 He explained, “Our budget is $1.2 million [$14,435 is the CHIPS allocation]. But being a municipality that does a lot of outside work, it doesn’t cost us $1.2 million to operate. For example, our revenue, which includes snow plowing and summer roadwork, is approximately $450,000 per year. A line-by-line budget reading doesn’t really show how cost effective the highway department is, due to revenue off sets.”

In doing what he calls “outside work” for the state and county as well as tackling extensive construction projects with their collective “can-do” attitudes, Goodwin and his multi-talented crew maintain a productive relationship with the Clarkson town board as well with residents.

Goodwin and his department were even written up in Highlights of Clarkson History by Hazel Kleinbach. The town, which was a settlement prior to 1810, has changed very little since the resourceful emigrants from England, Ireland and Germany came to the land then called the Triangle Tract wilderness. The population today is growing as a bedroom community for people who work in the Rochester area. Goodwin said that the last census recorded 6,000 residents. Almost all of the settlement, then as now, exists along the same four-corner area of what once were Indian trails.

The Clarkson Highway Department’s facility also is close to this epicenter at the intersection of NY Routes 19 and 104 (Ridge Road), which are heavily traveled highways that pass through the main population center of the town. The other highways in town are for the most part flat 55 MPH two-lane affairs that make their way through rural areas. While the town’s historic district includes many exemplary landmark-status homes, often of brick and cobblestone design, the 121 mi. of town road under Goodwin’s care also pass by housing built for seasonal migrant workers and well-run trailer parks, in addition to newer homes on open frontage and some new suburban developments.

“I fly for a hobby,” Goodwin said, “and aerial photos I’ve taken of the town show how agriculture and second-growth timber still occupy most of the land, and all the streams and water run toward the northeast.” The rural nature of Clarkson may be due to the mighty cabbage. One of the state’s largest cabbage growers also owns about a quarter of the land in Clarkson. “Some of the cabbage hauled out of here on 18-wheelers,” Goodwin said with obvious hometown pride, “is destined to be made into eggs rolls in Chinatown.”

Goodwin and his crew of 11 place an enormous amount of emphasis on communicating with Clarkson residents — via the phone, the newsletter or just chats with residents. The highway department is involved in nearly every aspect of the community life — from building and maintaining the playground to digging their graves in the town-owned cemetery.

“It doesn’t happen often,” said Goodwin. “But it’s perfectly possible that if a grave needs to be dug, the highway department will be brought in to do so.”

The Clarkson Highway Department also operates a permit-only (cost $160 annually) transfer station for household garbage and has increased the number of brush pick-ups. They’ll even send a trailer for the homeowner to load with brush when asked.

Goodwin’s crew also helps maintain the town-owned equestrian center, which this year features a first-ever big time rodeo in addition to a number of annual horse shows. The men prepare the parks for events like Good Neighbor Days and lumberjack competitions. Clarkson’s 35 acres of parks include an Erie Canal-side picnic-type of place and a boat launch, all built by Goodwin’s highway crew in 1994. They also built a new, fenced-in playground located near the highway barn. In addition to a domed shed for salt storage, the highway department also built a new courthouse and a new firehouse for the town.

Goodwin said being able to find employees who can multi-task in a small rural community experiencing a tight economy has made his job easier.

He said, “Everybody wants to drive a truck or heavy equipment. But we like to hire people who can also weld and fabricate, fix machinery and do carpentry.

“Our goal,” he said, “is to provide dependable, courteous, economical service for our residents and the motoring public.”

In winter the crew works nine-hour days with a half-day on Fridays. They begin at 6:30 a.m.

Goodwin added, “This early February morning was a prime example of where being early helped us out because by 7:00 a.m. we had slick, wet snow and slippery conditions with a few cars in the ditch and no injuries.”

Although Clarkson gets “a good shot of lake effect from Lake Ontario,” because of its rural setting, Goodwin said he can mix sand with the highway salt without creating a potential clean-up problem.

“There are so few gutters in town that the sand just washes away without causing any problem,” he said. “We use about 2,000 tons of salt a year and 1,000 tons of sand, plus I’m a firm believer in Iceban, an additive.”

As Goodwin spoke, his computer-savvy assistant, Dick Nurse, printed out the latest figures — 1,355 tons of salt used this season as of that morning. Nurse said computer programs — a benefit of modern times in the department — help him track personnel, materials, costs, and budgets.

Team members on the Town of Clarkson highway crew also take a certain amount of pride in the fact they often buy previously owned heavy equipment, rather than new, and then modify it for their own uses — for example, an old paving machine which they have converted for use as a road-widening machine. Once they are done with it, the heavy equipment usually goes back to a Roy Tietsworth auction, often fetching as much as the original asking price, due to the fresh, professional-quality paint job and mechanical overhaul that each piece of equipment in the highway barn benefits from during the long, cold winter hours. These are people who aren’t happy if they aren’t working on a project that probably uses an engine.

More water often means more new subdivisions. Water main construction is an ongoing job in Clarkson, weather permitting. More than 70,000 ft. of water lines have been installed by the crew since 1989. The installation begins with the formation of a water district. Then the town floats a bond for the project, and the people who will be using the water find another line on their taxes until the capital improvement utility is paid off — typically in approximately 20 years.

Then easements are secured from people living on the road front, followed by a utility stakeout marking the presence of gas or septic systems or anything else in the ground. Goodwin’s team digs the ditch and installs the pipe — cast iron is mandated — using their own equipment, a hydraulic excavator to dig the trench and their bulldozer to backfill the excavation. Now, Goodwin said, comes the “exciting part,” when water is added and pressure testing begins. Once the installation passes certification for pressure, the pipe is flushed out and super-chlorinated in preparation for a health test. Once health tests are passed, the residents hook up.

More water often means new subdivisions are on the horizon. Can new neighbors and customers for the Clarkson Town Highway Department be far behind? P